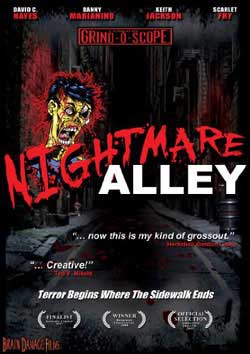 Turn down the lights, grab your popcorn and join your host, the master of the macabre Scarlet Fry, for a hellishly wicked fright-fest guaranteed to freeze your blood! Vengeful ghosts, walking dead cowboys, and other ghastly beings abound in seven tales of shock and terror from beyond the grave. Equally horrific and humorous, Nightmare Alley is an over-the-top exercise in shock. Presented completely uncut and uncensored, it will scare the living yell out of you!

Nightmare alley takes the low budget route of Creepshow meets Grindhouse experience with an anthology based collection of shorts. The grind house reference comes with the digital dirt treatment that is being used alot these days. My only suggestion on that aspect would be to take it a bit farther and color time the footage more with some bleaches and motion jumps. The film has a comedic tone that plays around with the concepts mixing silliness with classic horror concepts. We got cowboy zombies who have a mean taste for brains and eating thumbs off and we got a demon rat toy that commands its buyer to do its bidding. All pieces are taken in stride by using short story telling like the panels from a EC comic book. The film contains several shorts as opposed to the common 3 for 1 standard, each ending on a somewhat unexpected ending. The endings though, don’t all come with the bang you might be used to from the Tales from the Crypt series endings. A few don’t really feel like they ended at all, but that’s the choice of the filmmakers and how they want these capped off. I prefer clever endings myself and closure.

When your making these kind of productions on a shoestring, there are inevitable moments that either intentionally or unintentionally put a smile on my face in there simplest but off key ways. For instance, the ghoulish hosts whose lips don’t match his dialog, a stoner wearing an “ass hole” T-shirt or even something like a leg being hacked off and using liver parts as the ligaments rather than the proper fleshy bits. Purists might scoff and call these out as mistakes or oddities, but I just call them entertainment.

In one scene a man gets stabbed to death but blood sprays out from the back of his skull. In another, a homo prostitute comes out of nowhere and performs a lap dance during the middle of the day. And if that isn’t enough, then the raging fat boy seducing pool-side women in his daisy dukes is something to behold. If they didn’t mention it already in the after title plate, I would of had to call it out in this review. But showing up for a dinner date shirtless and flabb swinging, that’s gotta be the white trash scene of this week. A high point for me was the artist who turns his wife’s head into a sculpture……not a replica but, actually covering her head with clay. That’s one way to get the job done.

All these add to up a “what did I just watch feeling” that works in its own weird little ways. While I have seen plenty of low budget cinema that reeks of messy premises and bad acting, Nighttmare Alley isn’t one of them. It presents a horrific appeal that has its own demented little charm to it. That charm may be misplaced but its still there. In closing, I know viewers will not like every short in this collection as some just simply don’t go anywhere, however its a fun little mess that delivers a rather unique choice of entrees into its overall package that might just tickle you the same way it did me….