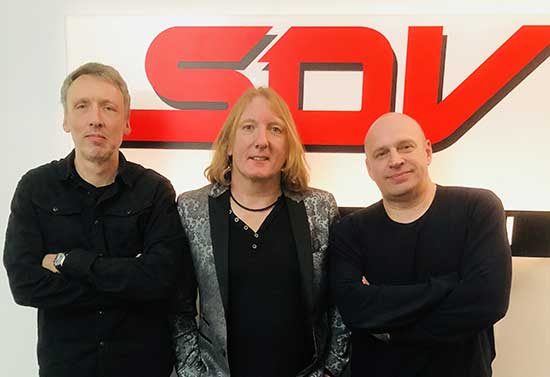 It’s official at last: Space Elevator, one of Britain’s most talented newcomer acts, has signed with Steamhammer/SPV. The quartet featuring flamboyant vocalist The Duchess, with its mélange of tasteful classic rock and radio-compatible pop rock is currently among the hottest new acts on the British music scene. Following the release of their single ‘We Can Fly’, May 25th will see the arrival of their second album Space Elevator II. The video for ‘We Can Fly’ was shot atop the largest privately owned satellite dish in the world, which belongs to Thoth Technology, Canada, designers of the world’s first 20km-high space elevator and collaborators with the band on their space project. The band is scheduled to tour the UK in May with festival appearances in the summer. Additional shows for the autumn are currently being organised.
Space Elevator was founded by The Duchess and guitarist David Young, who have been joined by drummer Brian Greene and bassist Chas Maguire. This line-up has produced the successor to their 2014 debut, featuring twelve numbers that impress listeners with well-crafted rock songs, great dynamics, powerful playing, lush vocal harmonies and instantly memorable melodies. Space Elevator II will be available on CD, vinyl and digital.
Founder member David Young looks forward to the group’s collaboration with Steamhammer/SPV and explains the band’s reasons for signing with the Hanover label: “SPV share our own ambition to make Space Elevator an international success … the decision was easy!”
Olly Hahn (Head of Steamhammer) is proud of and happy about the signing: “In Space Elevator, one of the most promising new British bands has decided to join forces with us. To us, that’s a confirmation of our work and at the same time a challenge that we’re happy to accept.”
SPACE ELEVATOR live 2018
17.05. UK-Mansfield – The Diamond
18.05. UK-Bathgate – The Dreadnought
19.05. UK-Wigan – The Old Courts Theatre
20.05. UK-Stoke-On-Trent – Eleven
24.05. UK-Bucks – South Bucks University
25.05. UK-London – The Hammersmith Club
31.05. UK-Oxford – The Bullingdon
15.06. UK-Kent – Leo’s Red Lion
For More Info Visit:
spaceelevatorband.com/
www.facebook.com/spaceelevatoronline
www.spv.de
www.facebook.com/steamhammerofficial/
Share