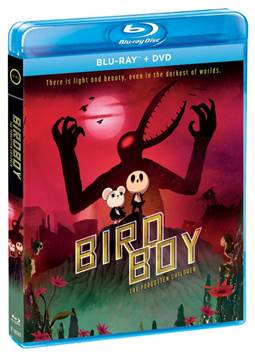 The “dark animated delight” (Indiewire) Birdboy: The Forgotten Children will be released in a Blu-ray™ + DVD combo on March 13, 2018 by GKIDS and Shout! Factory, with bonus features including the highly decorated short film Decorado from co-director Alberto Vázquez.

Winner of the Goya Award for Best Animated Feature (where co-director Alberto Vázquez won the Best Animated Short Film prize in the same year for Decorado) and full of unforgettable characters, Birdboy: The Forgotten Children is a darkly comic, beautiful and haunting tale of coming of age in a world gone to ruin. Gorgeous graphic imagery brings to life a surreal and discordant world populated by adorable animated critters, searching for hope and love in the story based on Alberto Vázquez’s graphic novel and award-winning short film.

There is light and beauty, even in the darkest of worlds. Stranded on an island in a post-apocalyptic world, teenager Dinky and her friends hatch a dangerous plan to escape in the hope of finding a better life. Meanwhile, her old friend Birdboy has shut himself off from the world, pursued by the police and haunted by demon tormentors. But unbeknownst to anyone, he contains a secret inside him that could change the world forever.