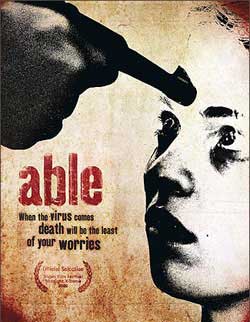 Terrified Berliners struggle to survive each other and their own failing bodies during a sudden epidemic of progressive paralysis.

Able is a new independent feature from Stotler / Robert Films

As we are plunged into the dreary on screen world. we are at the moment of dying. The planet as it appears has become victim to a viral outbreak with fatal consequences. As the radio plays over and over it announces a Quarantine in effect, though it appears it is too late for most who have caught the virus on a path of no return. Our film which is a short 69 minutes for a feature starts with a wimper rather than a bang. The essence of this movie is dying and it never seems to get much past that dreary motion. We encounter many either dead or suffering or on there way to death with an outbreak that takes over the body and eventually restricts all movement to a rather paralyzed state of final moments. The feel of this movie is of loneliness, solemn individuals, quiet deaths and desolation.

It’s probably important to note that this is not a Zombie movie, a movie of Rage or of the walking undead. You would usually expect that with its general synopsis but with that you would expect redundancy to follow. The movie is not redundant it just never really goes anywhere. A few individuals have there health due to a serum that was taken early on, the rest are mostly immobile pale faced, sullen bodies that are on there way to slow deaths. The deaths of course come from the paralysis that leaves them without ability to move or function making them sitting ducks in there own wallowing pits of disease and decay. I would comment on who the main acting talent was but I never could make out the names to figure that portion out.

As one of the preachers states” A living dog is better than a dead lion”. Some have found there way to churches to congregate in there final moments. Though you wont find any action or excitement. Much of “Able” is shot in sort of abstract ways that reveals shapes and movement dimly lit giving us a sense of ambiguity at times. I would hope this was an artistic move rather than poor lighting but its hard to tell. The angles used go from bland to interesting at times but most of the film give you the feeling of being in the dark as much as the narrative does. With droning tones, and orchestral blending the score moves much in the same fashion. That fashion is rather lethargic, slow moving and vague. Highlights might be a sort of psychotic nature that those still living use to take advantage of the dying, but even that is bland and unnecessary. In all if you don’t’ get the message already it is this film is boring. I was expecting “some” action to ramp up and at least cater to that need but it never came.

The film offers a slight moment of intention in the final 2 minutes but that passes as quickly as it arrives. In fact that missing 30 minutes that the film should of had could of saved itself in that last half hour. But instead we get a roll to credits and a unsatisfied horror audience. I would go more into the plot, but there really didn’t seem to be any. The dialog was hard to hear so lines were lost more than informative. The only rewards one might take away is some cinematic camera work that takes advantage of light sand shadows. That’s pretty much it.

I would say Marc Robert is a competent director , though the material was as bland as I’ve seen, so the film really lacks from a lack of action, plot directive and visual dynamics to keep one entertained. Haunting would be a good point of reference to classify it under for a positive spin. Is haunting though enough to be entertaining? This will have to be all I can leave you with to discover for yourself.