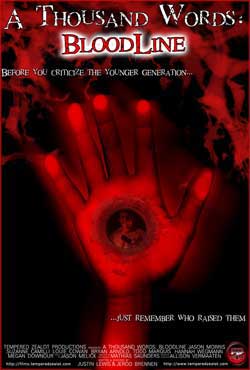 Ian’s back and he’s not alone! This sequel continues the story of Ian, a voyeuristic serial killer with a penchant for photographing his victims. Ian’s past is revealed as his son, Steven, struggles to win the heart of Jennifer, his neighbor’s girlfriend. The journey of father and son brings us closer to understanding the killer inside Ian, as he leaves a trail of bodies in his wake. Before you criticize the younger generation, just remember who raised them…

QUICK FIX:
In this short film that comes to us from the great state of Ohio, we find a continuation of the short known as A THOUSAND WORDS (as in “a picture is worth…”) that finds lovable camera freak and serial killer Ian Black back for more bloodshed. This time around we’re introduced to Ian’s son Steven. Steven is just your average dude trying to attract the attention of the neighborhood hottie away from the douche bag jock, and very early on we learn that Steven is just as avid of a shutterbug as his old man. Let’s hope that’s all they have in common…

RAMBLINGS:
The longer I do this reviewing gig through the years, the more screeners get sent to me (never a bad thing for a movie geek like myself), and the more it astounds me at just how many extremely talented filmmakers & actors/actresses there are out there that the majority of the horror community might never get to know outside of these folks’ own region, and that is a damn shame. Of course, you cheer for each and every one of them to hit the big time and leave their mark on the horror world, but sometimes that just doesn’t happen as fast as one would like. I’ve been very fortunate to get to know a lot of those people out there thanks to the world wide intra web, and I am proud to call many of them a friend. And even though most of them I’ve yet to meet face to face, I treasure each and every one of those people and the talent that they bring to the table, and I try to do what I can to the best of my ability and for as far of a reach as this site can generate to bring all of you out there the best that the horror community has to offer. Whether the flick is 90 seconds long or 190 minutes, if it’s a good movie I’ll pimp it harder than Heidi Fleiss in court. If it sucks, you’ll all be the first to know.

I love it when a really cool story can be told in epic form in less than half an hour; it really is a testament to the talent when that can be done. Michelle Fatale did it with both DEAD LINE and THE CLEANER, and now the fine folks at Tempered Zealot Productions have done it with ATW: BLOODLINE. Ian is not your average stalk n’ slash crazy dude – he also photographs his victims before, during, and after the kill…you know, for posterity. When his son is bullied and roughed up by the jock and the jock’s friends, all for just trying to get a couple of pictures of said jock’s hot girlfriend that said jock clearly does not deserve, Big Daddy Ian springs into action and it’s on like Donkey Kong!!

Louie Cowan is an amazing actor, plain & simple…part Norman Bates, part Dr. Herbert West, his cold, intense portrayal of Ian left shivers in my cold cold heart. Jason Morris, as his son Steven, brings it to the table as well. Suzanne Camilli as Jennifer, the cause of all this turmoil in everyone’s lives, displays talent and of course, amazing beauty. Bryan Arnold – I’m sure he’s a nice guy in real life, but his portrayal of the ass hole boyfriend Jack was dead-on enough to make me loathe the guy and pray for his guts to get pulled out of his ear….outstanding job!!

Writers/Directors Lewis & Brennen have crafted a very professional looking, very intense flick. These guys make a great team and deserve to go places, which I’m sure they will. Check out the movie’s website for details on purchasing this little gem, as well as other related goodies, for your very own:

Also, some new & awesome news to throw into the mix…the last part of the planned trilogy, known as A THOUSAND WORDS: REVELATION, has finished production and is awaiting editing and some finishing details in post. I for one cannot wait to see how they wrap up (or continue?) this kick ass series…should be epic, at the very least!!

LAST WORDS:
Just for sh*ts and giggles, I was going to try and make this review wind up being exactly a thousand words long to have a hammy tie-in to the movie’s title, but I lost count somewhere around threeve. ATW: BLOODLINE is an awesome and intense 26 minute long slasher flick with a bit of a commentary on bullying. Plus, it’s got story, heart, characters you care about, characters you lust after, characters you hate – all wrapped up with a blood-soaked bow for your viewing pleasure, and most definitely deserves to be in every horror fan’s collection.