Presented as part of the Monster Fest Traveling Road Show March 10th at Event Cinemas in Sydney and coming to theaters in Australia and New Zealand this March!

His House. Your Nightmare.

A romantic holiday takes a sinister turn when Brad & Ashley’s car breaks down in the German countryside. Forced to take refuge in an isolated farmhouse they thought to be abandoned, the couple quickly learn that the house holds a dark past. Thrust into a supernatural nightmare, the pair must battle malevolent forces lead by an undead Nazi general if they wish to survive the night. 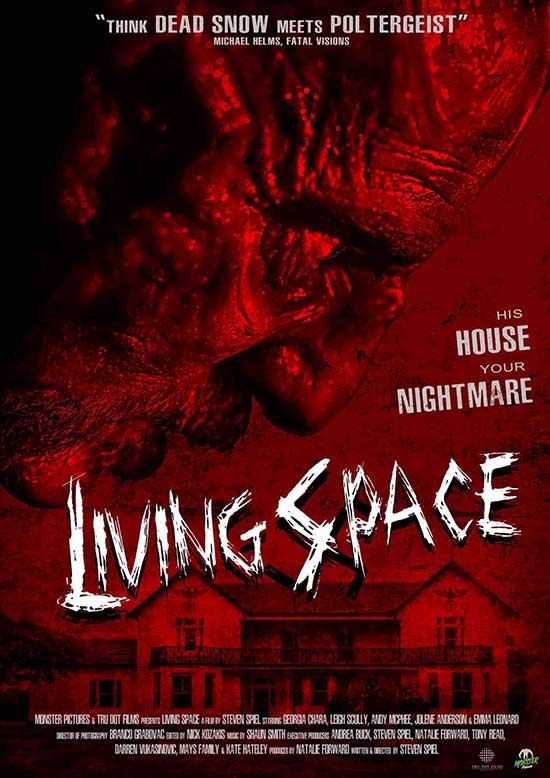 Producer Natalie Forward said “the film is a horror fan’s delight. It really seeps into your psyche and will have you thinking about it for days. The set was terrifying. The house we used lent itself perfectly to a horror film and really is a character of its own in the film. For an independent film to receive a theatrical release in Australia is tough and it truly shows the quality we were able to achieve.”

Writer/director Steven Spiel explains that LIVING SPACE was solely written to entertain audiences. “I knew exactly what I wanted to achieve by creating this film. I was wanting to excite the audience from the very start. I wanted to send the audience on a rollercoaster ride of different emotions to ensure that people could escape their daily lives even if just for 80 minutes. LIVING SPACE is a horror/thriller based on an ideology but not rooted in reality. I feel it’s perfect for someone new to horror as well as seasoned fans .”

The deal was negotiated between Tru Dot Films and Monster Pictures with international sales being handled by Jinga Films.

The film will world premiere March 10th at Event Cinema George Street as part of the Monster Fest Traveling Road Show, which launched in 2016 and brings festival favorites from the Melbourne based genre festival as well as brand new horror-centric world premieres to Sydney. The next edition of Monster Fest will take place November 22-25 2018 at Melbourne’s iconic and much loved Cinema Nova from