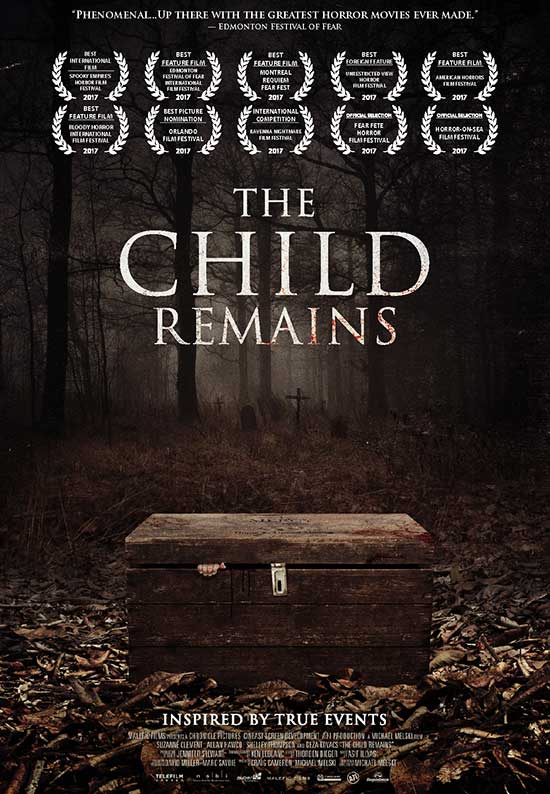 THE CHILD REMAINS, a supernatural thriller about an expectant couple who spend a weekend at a haunted country inn that was once a macabre maternity home, has been selected to screen this month in international competition at Fantasporto ‘18 in Portugal, one of the most important genre events in Europe, and named one of the ‘25 Leading Film Festivals in The World’ by Variety.

The film will also screen this month at the Famous Monsters of Filmland Silver Scream Film Festival in California on Feb 16, as well as the Philip K. Dick Science Fiction Film Festival in New York City on Feb 24.

Winner of 7 Best Feature awards at horror fests around the globe, including Best International Film at the Spooky Empire Horror Film Festival in Orlando, THE CHILD REMAINS is unveiling this month its final cut which features new scares and is trimmed for theatrical release.

Written, directed and co-produced by Halifax-based Michael Melski (Charlie Zone), THE CHILD REMAINS is inspired by the true tale of the ‘Butterbox Babies’ and their horrific chapter in Canadian folklore. The film had its US premiere at Fear Fete in Mississippi last October where it was an awards nominee, and its European premiere in international competition at the Ravenna Nightmare Film Festival in Italy.

Melski describes THE CHILD REMAINS as “The Shining meets Rosemary’s Baby in The Orphanage”, and is excited for the upcoming screenings. “Especially Fantasporto, where we screen on Feb 26. We’ve been hoping to get into this festival since post-production.” Fantasporto ’18 runs Feb 20-March 4 in Oporto, Portugal.

Produced by Craig Cameron (The Corridor) with Executive Producers David Miller of A71 Productions (He Never Died) andMarc Savoie, the film was made with assistance from Nova Scotia’s Production Incentive Fund, and Telefilm Canada.

THE CHILD REMAINS is aiming for theatrical release later this year.