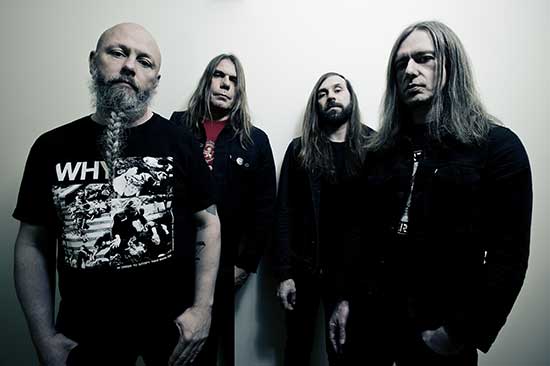 If ever there were a point in history that demanded angry, scathing, explosive music then this is it. With eerie but exhilarating echoes Reagan’s ’80s and the bilious, hyper-aggressive hardcore punk scene that erupted in response, the world of 2018 is more than ready for the blistering return of Septic Tank. This band of weather-beaten underground veterans have existed since the early ’90s, more as a whispered enigma than a full-time band, but the decisive moment of deafening reality has arrived with the unveiling of Rotting Civilisation, the first full-length Septic Tank record and the ugly, rampaging rebirth of the subversive hardcore spirit.
Originally formed in 1994 as a low-key outlet for doom metal standard bearers Cathedral’s love for Discharge, Siege and other pioneering hardcore luminaries, Septic Tank’s original line-up featured Cathedral vocalist Lee Dorrian, guitarist Gaz Jennings and drummer Barry Stern (ex-Trouble) alongside Repulsion’s Scott Carlson on bass. A handful of jaw-shattering, snot-spraying anthems were swiftly thrown together and the impromptu crew jammed together on a few occasions, but thanks to a combination of logistics, geography and life getting in the way, Septic Tank lay dormant for nearly two decades.

“We talked about doing it again many times, but it took us 20 years to make a record,” Lee Dorrian explains. “Black Sabbath were doing their so-called last-ever show in Birmingham and Scott wanted to come over for that, so I suggested we got together and did an album while he was here,” Lee recalls. “He stayed over for five days. 14 of the songs were already roughly written but not rehearsed, another eight or so came up on the spot and were recorded straight away, and that was it. It took us over 20 years but I’m really happy we did it.” 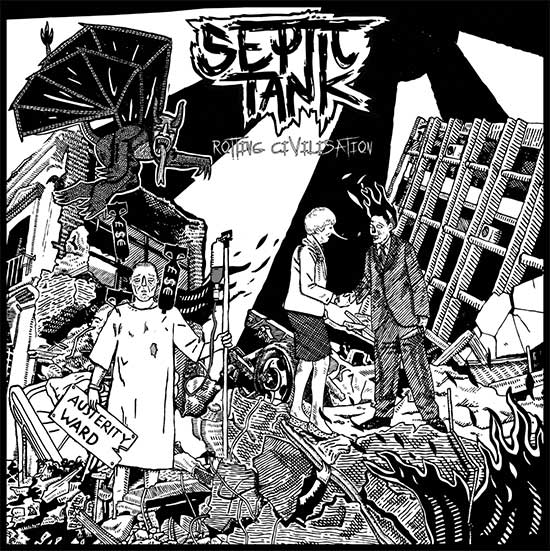 With all the vitality and venom we demand from the best hardcore, Rotting Civilisation is an obscenely thrilling rollercoaster ride that takes in everything from numerous bursts of flagrant Discharge worship (Walking Asylum, Victimised) to Motörhead-style snot’n’roll ragers (Divide And Conk Out, Digging Your Own Grave), Frost-fuelled doomcore (Death Vase, Living Death) and even a skewed homage to Japanese punk legends G.I.S.M. (You Want Some?). Musically diverse but unrelenting in its belligerence, it’s also an album full of brutally direct declarations on the state of the world today, the idiocy of the social media age and the general stupidness and selfishness of humanity in the 21st century. With his incensed worldview vividly reflected in artist Stewart Easton’s idiosyncratic cover art, Dorrian has never written with such sledgehammer accuracy or righteous fury.
No longer a shadowy side-project that existed more in the minds of its participants than in the ears of the masses, Septic Tank have blossomed – or, perhaps, mutated – into one of the most invigorating musical fists to the face of our times. The perfect soundtrack to the collapse of society, Rotting Civilisation proves that legends never die, the best ideas are always worth another go and, above all, we the people will not go fucking quietly.
Rotting Civilisation Track Listing:
1. Septic Tank
2. Who
3. Victimised
4. Social Media Whore
5. Divide and Conk Out
6. Treasurers of Disease
7. Fucked
8. Whitewash
9. Death Vase
10. You Want Some
11. Digging Your Own Grave
12. Danger Signs
13. Walking Asylum
14. Lost Humanity
15. Never Never Land
16. Self-Obsessed
17. Living Death
18. Rotten Empire
For More Info Visit:
www.facebook.com/septictankuk/
Share