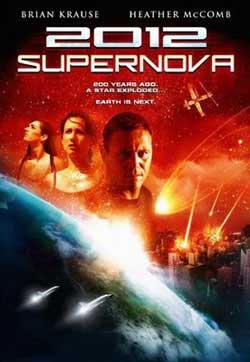 Professor Kelvin (Brian Krause) is an astrophysicist working for the government who must recognize and confront a violent cosmic threat: a huge burst of radiation hurtling toward the Earth following the cataclysmic explosion of a star in a nearby galaxy. To deal with the approaching menace, the professor devises a bold and risky plan — a planet-sized gamble, in fact — to shield civilization from the approaching deep-space danger.

The advent of 2012 has caused a stir within the moviemaking industry, especially in the Sci-Fi/Action genre. Anthony Fankhauser’s 2012:Supernova delves into this idea of complete destruction through the event of a supernova blast that will attempt to end civilization as we know it. With scientific analysis and action-packed chase scenes/fights, the film fits perfectly into the Sci-Fi/Action genre. The movie begins 200 years previous, showing the Lyra Constellation in which Supernova evolves from.

In present day, the Supernova comes firing from the constellation, and is shown eliminating a satellite in orbit. From this explosion,Kelvin(Brian Krause) is called into the NASA research facility on emergency. He summons his wife, Laura(Heather McComb), and daughter, Tina(Najarra Townsend), to pack their things to leave at once. As they are convening, the meteors star to rain down on the city, and the family collectively knows that there is something out of the ordinary that is occurring.

En route to the NASA facility, the family is followed by two machine gun carrying, Iranian terrorists, which leads to a pursuit through an abandoned truck yard. When saved by NASA officials, Laura and Tina realize that they are in grave danger accompanying Kelvin on the mission, and follow top security agents to retrieve their belongings to stay in safety at a military base. When Kelvin goes to the NASA facility, he is immediately introduced to his two new co-workers. Professor Kwang Ye(Allura Lee) is a nuclear scientist for China, and Dzerzhinsky(Alan Poe) is a nuclear representative from Russia. All three have conflicting visions of how to tend to the Supernova, and must to co-exist through using their nuclear explosives to help save the world.

While Kelvin deals with saving the world, Tina and Laura go through the struggle surviving the many forms of natural disasters that are occurring due to the shower of pieces of the giant star. On their way to safety at the military base, the continuation of earthquakes cause a giant boulder to wipe out the SUV in front of them, leaving them on their own without any form of help from the agents. Laura gets a hold of Kelvin, and makes him aware of the problems that are preventing them from making it safely to the base. Kelvin has his own problems, as the shuttles with nuclear explosives can unsuccessfully do their job of making it through towards the space station platform in order to prevent Supernova.

Laura and Tina continue on their path to safety, running from lightening blasts and a tornado trying to survive the destruction that is at hand. Kelvin fights with the two scientists about how to eliminate Supernova’s path to destruction, and deliberates the possibility of going up into the shuttle to the space station to eliminate Supernova himself. Unfortunately due to the earthquakes, the space station’s platform is almost reduced to rubble, and Kelvin must convince the facility workers that they must still go on with the launch. When Kelvin is working on the machinery in the facility, he is pursued by a ninja dressed in complete black regalia, which he feels betrayed by his foreign co-workers. The end decision of making the Russian and Chinese representative scientists in a heroic quest to save the world, Kelvin makes the choice of a possibility of losing his wife and daughter and having to deal with a possible enemy in the small vicinity of the spaceship.

The issue that I had with the film was they chase scenes bothered me because instead of running from danger, the runners seemed as if they were jogging or running in slow motion. When running from eminent danger, seeing a person jogging destroys the realistic feel of pursuing their lives being saved. There was a lot of scientific dialogue, which helped clue the viewer into what is happening and helped one understand the danger and how to prevent the blast destroying the world. There is talk that Laura may be Tina’s stepmother, but no real back story of how this came to be. This ruined the character development for me, completely focusing on the present instead of how this family came to be.

There is no bloodshed, and plenty of CGI renderings of what would happen with a Supernova blast.

In a little over 3 years, 2012 will be at hand, and we must accept whatever happens if need be. Frankhauser’s depiction of what will happen in 2012 is action packed, but lacks in character development and believability impedes the likability of the movie to a certain extent.