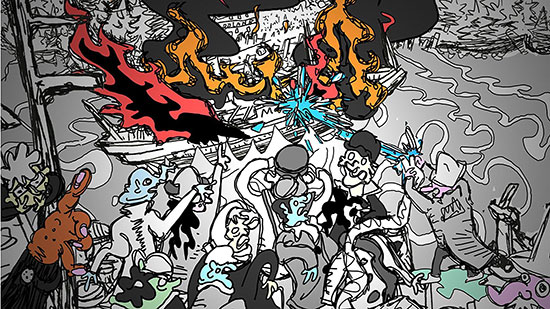 Baby Billy is in his crib during the infamous Halifax Explosion of 1917.

So this is another one of those shorts with a really interesting backstory and based on real events.  Specifically,  The Halifax Explosion, a maritime disaster in Nova Scotia, Canada in 1917. Two cargo ships collided in the harbor, one of them loaded with explosives from the French government.  BIG bada-boom. The resulting explosion destroyed buildings and other properties for a mile all around. Then the fires started.  I had never heard of this event (as I am not from Canada) so I had to do a bit of research on it.

This year marks the 100th anniversary of The Halifax Explosion. As part of the remembrance of the event, a group of animators created short films about it. This film is based on the director’s grandfather, William S. Owen, who was only a child at the time.

The animation style is impressionistic, that is to say it doesn’t tell a linear story but relates the sensations of having been there. It’s pretty much how I imagine a very young child would remember such an event. The sounds, the chaos, the confusion, and the fear, but not necessarily the details.

Mr. Owen did all the animation himself. According to his own words, it took him over seven months to create the final project. There’s a lot of detail in the animation, and I actually watched it twice to try and catch everything that was going on. It really does convey what I would imagine was the chaos of the day.

Don’t expect Disney or Anime here. That’s not the style of animation Mr. Owen used. But his choices are good ones.

Using my special short scale of one to five, five being awesome, I’m giving this film four pacifiers.