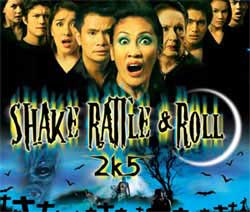 Shake Rattle & Roll 2K5 is a creepy, delightful blend of fun and fright for the whole family! â€œPoso is about a fake occultist (Ai Ai delas Alas) who retires when her last job goes terribly wrong. But when a wealthy client (Miss Gloria Romero) promises Ai Ai a huge fee to contact Glorias dead grandson (Marco Alcaraz), the comedy queen cant refuse. Together with her assistants-in-crime (Rainier Castillo, Jenine Desiderio, and Biboy Ramirez), they take on this last job, only to realize that they may not live to see another day.

I have reached the point in my addiction to horror , exploitation , and sleaze cinema that I have started purchasing movies based on the countries from which they originate. Especially Asian films. Countries like Indonesia , Thailand , Malaysia , and the Philippines all have their own history and culture of film making and I became curious when I heard of some of the strange and bizarre films coming out of Indonesia.

The first tale titled POSO , is like a reverse Scooby Doo episode where four friends , minus a canine , run a scam business of conducting false seances through cheap special efx trickery and a very annoying and very fake medium. When a job goes wrong and their charade nearly found out the fake medium decides to call it quits and retire until the lure of one last big payday lures them to a isolated house and a grandmother who wants to contact her dead grandson. The supernatural elements they discover turn out to bwe too real and deadly for our gang of deceitful occultists. POSO is okay as a introductory tale and leans a bit more towards comedy with mostly cgi effects and comes off light in the terror department.

The second story AQUARIUM deals with a family moving into a new condo who are threatened by a malevolant aquarium with a mask in it’s deadly waters. I like this one becaue the story behind the evil fish tank is that the previous tenants drowned his deformed daughter in it because she looked like a goldfish! I also like it because the mother , actress Ara Mina , is really cute with a nice big set of jabberclackers! I’m totally into her and like to watch AQUARIUM mainly because of her. But they actually do show the little goldfish faced fiend and the makeup is cheezy but still looks good and different fro the efx I am used to seeing in American horror films.

The last episode LIHIM involves what are probably the most widely know legends from the Philippines , the Aswang , which are basically vampires with a few slight differences. A man and his wife move into a small village preparing for the birth of their baby but unknowingly taken up residence in a village filled with Aswang who thirst for the blood of infants. WHile POSO had elements of comedy and AQUARIUM is more a ghost story LIHIM goes for a scarier feel and mood and is the bloodiest of the three tales and though it does not have scenes of full on graphic gore the end reminds me a bit of EVILD DEAD 2: Dead By Dawn as the husband must protect his wife and unborn child by fighting off and destroying the bloodthirsty creatures with various makeshift weapons.

There is a different director for each segment and of the three I think the director of LIHIM , Richard Soames , has the most style and created more of a creepy feel of the three episodes of the anthology. Even though I could find no rating for SHAKE RATTLE & ROLL on the box I would give it a PG – 13. There is no foul language , sex , or gaphic violence but it does deal with violence and murder against children. The Philippines has a large catholic population and is predominantly a conservative country so I was not suprised at the tameness of SHAKE RATTLE & ROLL but it was interesting to see a film totally removed from the style of film making from Hollywood , Europe , Hong Kong , and even Japan. The Philippinos have their own legends and folklore to draw from and their own film makers.

Overall I did enjoy SHAKE RATTLE & ROLL but if you are not familiar with Philippino films I can not wholeheartedly recommend SHAKE RATTLE & ROLL as your introduction to the countries horror genre. It has a network television or more like telemundo look. Almost generic looking but even though the special efx are close to the bad side of things and the acting not the greatest that is where the charm of these films come from.

Again the efx are cheap but look different and new from most horror movies I have seena and that was fun too. I do have other , older , films from the Philippines such as IMPAKTITA and BALAWIS which are from the late 80’s early 90’s which I consider much better with a true B flick underground horro vibe and I have heard of others such as BANGIS , VAMPIRA , and ZUMA which all sound like alot of weird gory fun. Unfortunately most of these films have never been released in the U.S. and are only avaliable through bootleg dealers with no english subs and not dubbed in english and must be viewed with their original Tagalog dialogue as well as the usual bad quality of these second and third generation copies.

A few have been released internationally but most of the true horror , sci fi , and action gems of the Philippino film industry have not recieved a dvd release. It’d be great if a U.S. company stepped up to the plate and began releasing some of these. At least Regal films is releasing the new crop of horror but it would be great if these unknown classics came out on dvd. Until that happens we’ll just have to depend on indie bootleggers , but SHAKE RATTLE & ROLL 2k5 is avaliable and worth a look if you are truly interested.