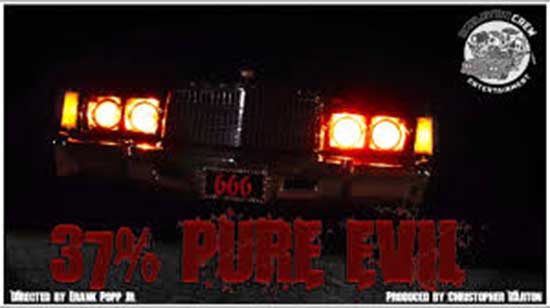 The film is a horror/comedy short, it follows “The Killer” and his possessed 1978 Chrysler Newport, simply known as “The Beast”. Sadly, the Killer dosen’t quite live up to his name. Shot in a mockumentary style; utilizing practical make-up effects and a stylish flair for horror mirroring the 80’s heyday period of the genre and the works of horror luminaries like George Romero, John Carpenter and Sam Raimi. Think Trailer Park Boys meets Christine.

Skeleton Crew Entertainment is comprised of industry veterans Justin Peeler, Scott Patterson, Frank Popp Jr. and Christopher Darton. Individually, Peeler currently works in television for TSN. He has directed music videos for Derelict, Death Point, Door to Door Human Gore as well as a number of shorts. Scott Patterson works on the PBS series The Odd Squad.
His past credits include Evil Dead The Musical, Trey Parker’s Cannibal The Musical and The Great Canadian Dino Hunt. Frank Popp Jr. is the writer/director of the cult horror feature Mulch, which he worked on for 10 years before completing. He has also shot a number of short subject films. Christopher Darton is a Metis Canadian producer/director of the documentary feature The Way We Was: The Story of the Kendall Wall Band and Hard Working Man: The Music and Miracles of Danny Brooks. He is currently working on his third feature length documentary … This Is Paradise: The Cameron House Story.

37% Pure Evil was shot in hi-def video in numerous locations around the Niagara Region using talent from the area on and behind the camera. The film stars veteran actors from the Southern Ontario area: Erica Sherwood, Liliana DeAngelis, Ryan Lunn and Ryan Ammerman.

The film premiered to a packed house at Frightmare in the Falls in Niagara Falls Ontario in November 2017.

Halloween Baby premiered at the London Comic Con in September 2016 and has gone onto be screened at festivals in Toronto, New Jersey, New York, Minnesota and Rhode Island among others and place in the bronze category at the FAME’ US Film Festival in Los Angeles.