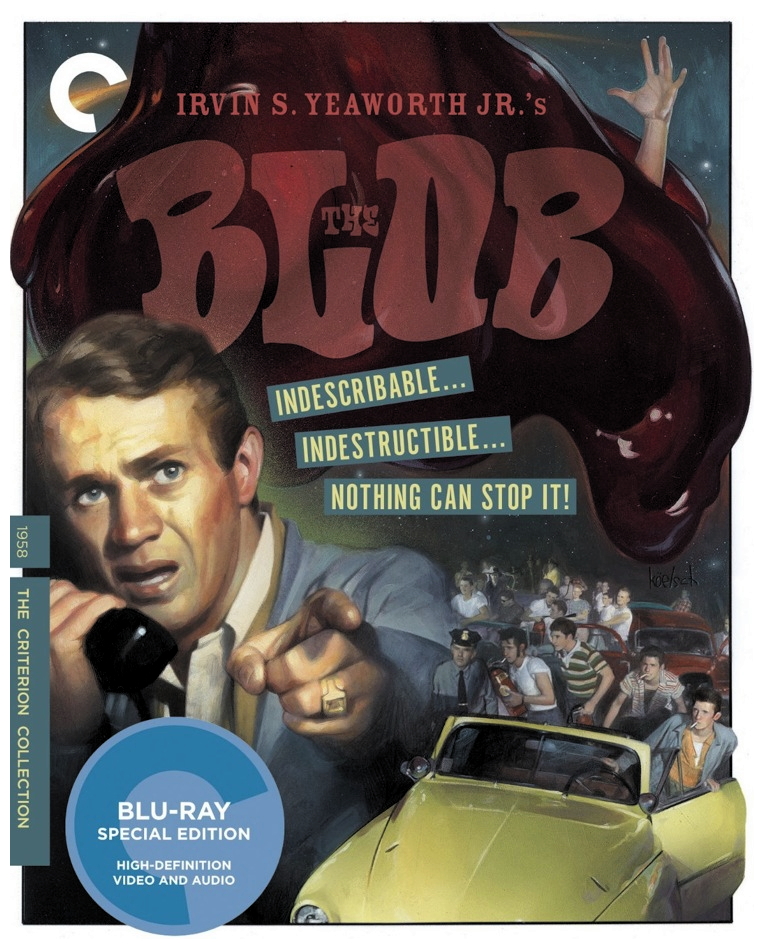 “After teenagers Steve Andrews and his girlfriend Jane Martin see a meteorite crash nearby, they set off to investigate. They come across an old man who seems to have some type of gelatinous matters stuck to his hand. They take him to Doctor Hallen who isn’t sure what the substance is but Steve becomes convinced it’s a monster of some sort after both the old man and the doctor vanish. As the creature consumes more and more people, it grows larger and larger. Steve’s biggest problem is that he can’t get anyone to believe him and continually faces skeptical policeman and angry parents. The creature finally reaches a size that it cannot be missed and everyone wonders how they will possibly stop it.” (courtesy IMDB)

It’s a creeping, crawling, slimy, gooey alien life-form which dissolves and absorbs anyone it happens to come in contact with! The Blob (1958) tells the story of a strange meteor crashing to Earth near a small town and unleashing an alien blob-like creature which wreaks havoc by dissolving anything organic (people, for example). Are there are no boundaries as to how much death and destruction the blob can cause? It all started with a script entitled The Molten Meteor, until producer Jack H. Harris overheard screenwriter Kay Linaker refer to the film’s monster as a blob. After considering alternate titles like The Mass and The Glob, they finally settled on The Blob. It was to be directed by Irvin S. Yeaworth, an efficient filmmaker who had made more than four hundred industrial, educational and religious movies. How efficient? The budget for The Blob was set at US$120,000 and Yeaworth managed to bring it in for 10% less. 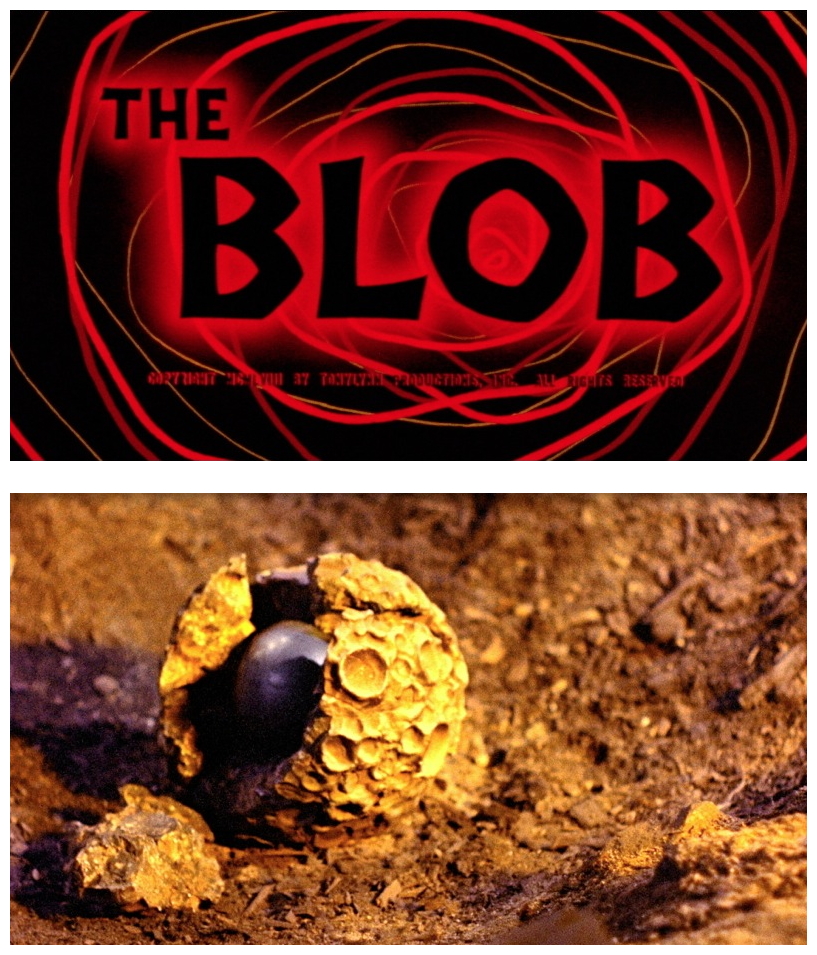 28-year-old Steve McQueen received US$2,500 for his first starring role. He turned down an offer for a smaller up-front fee in return for a 10% share of profits because he needed to pay for food and rent, and assumed the film would be a flop anyway. The Blob became one of the biggest moneymakers of the year taking US$4 million at the box-office and, according to producer Harris, ultimately grossed over US$40 million. Paramount Pictures recognised what they had, and hired songwriters Burt Bacharach and Mack David (brother of Bacharach’s usual writing partner Hal David) to write and perform a non-threatening theme song that would prevent the faint-of-heart from going into nostril-flaring terror during the opening credits. What they came up with was a goofy tune described as, “One part Temptation, two parts Tequila.” Session singer Bernie Knee does the popping noises by pulling his finger out of his cheek seven times. Only Ralph Carmichael‘s musical score received a screen credit, leading some viewers to incorrectly assume the song was a last-minute addition. 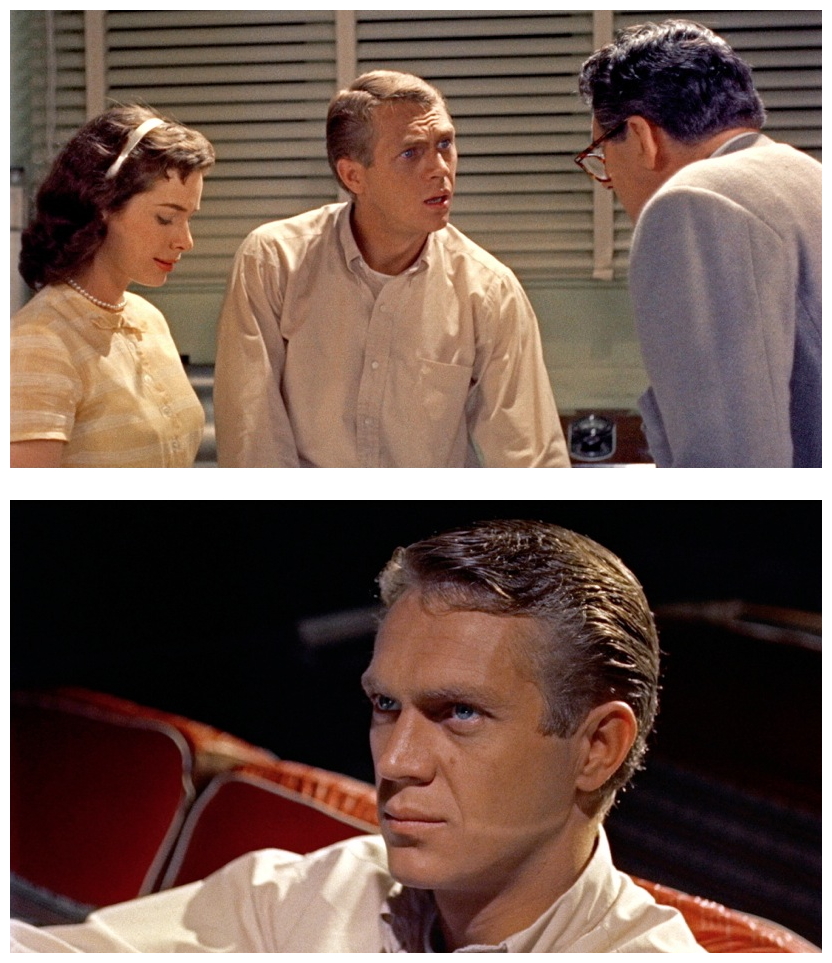 Set in a small rural town in July of 1957 (according to the calendar on the cop-shop wall), teenager Steve Andrews (Steve McQueen) and his girlfriend Jane Martin (Aneta Corsaut) are smooching in a parked car when they see a meteorite crash beyond a hill. Steve decides to look for it, but an old man (Olin Howland) living nearby finds it first. When he pokes the meteorite with a stick, it breaks open and a small jelly-like blob inside attaches itself to his hand. In pain and unable to scrape or shake it loose, the old man runs onto the road, where he is nearly hit by Steve’s car. Steve and Jane take him to Doctor Hallen (Stephen Chase), who anaesthetises the old man and sends the kids back to locate the impact site and gather more information. Meanwhile, the old man’s arm is still being consumed, and Hallen decides he needs to amputate immediately. Before he can, the blob completely consumes the old man, then his nurse (Lee Payton) and finally the doctor himself, all the while continuing to grow. 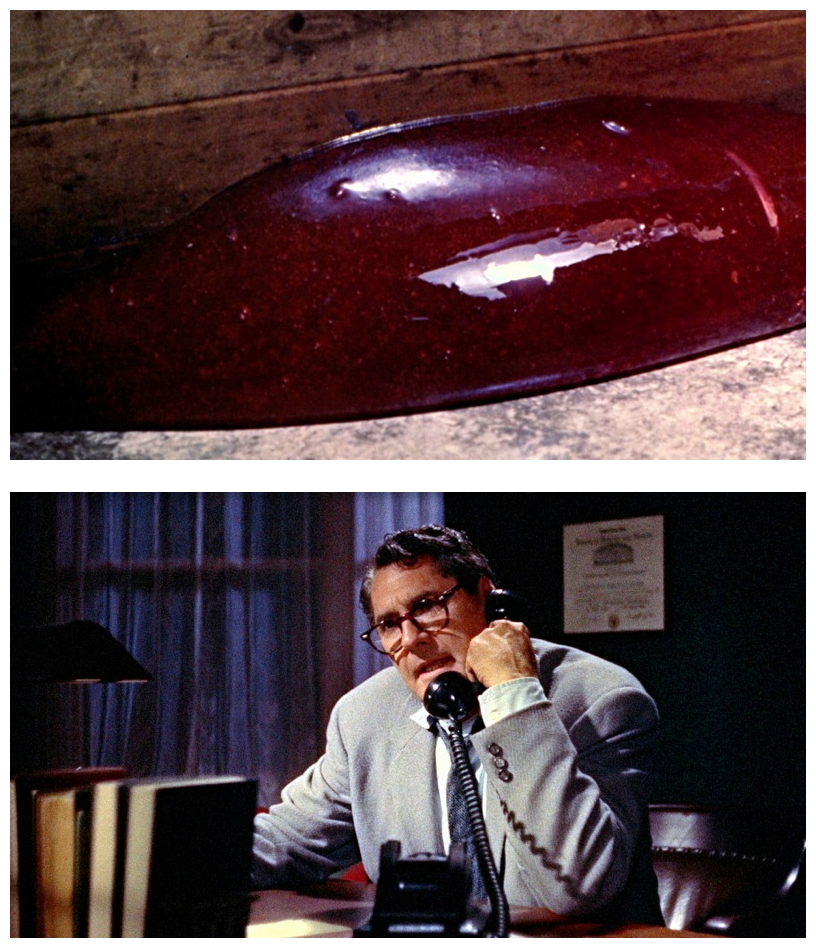 Steve and Jane return in just time to see the doctor being absorbed, so they go to the police station and return with Lieutenant Dave (Earl Rowe) and Sergeant Bert (John Benson), but there’s no sign of the blob or its victims, and the cops dismiss Steve’s story as a pesky teenage prank. In the meantime, the blob absorbs a mechanic at a garage and grows in size every time it consumes. At the local Colonial Theatre, which is showing a midnight screening of Daughter Of Horror (1955 also known as Dementia narrated by Ed McMahon), Steve recruits Tony (Robert Fields) and his friends to warn people about the blob. Steve and Jane head for his dad’s grocery store which they find unlocked, and the cleaner is nowhere to be seen. Suddenly the couple are cornered by the blob and they hide in the walk-in freezer. The blob oozes in under the door, but it quickly retreats. Steve and his friends then set off all the alarms around town, but the police still refuse to believe him. 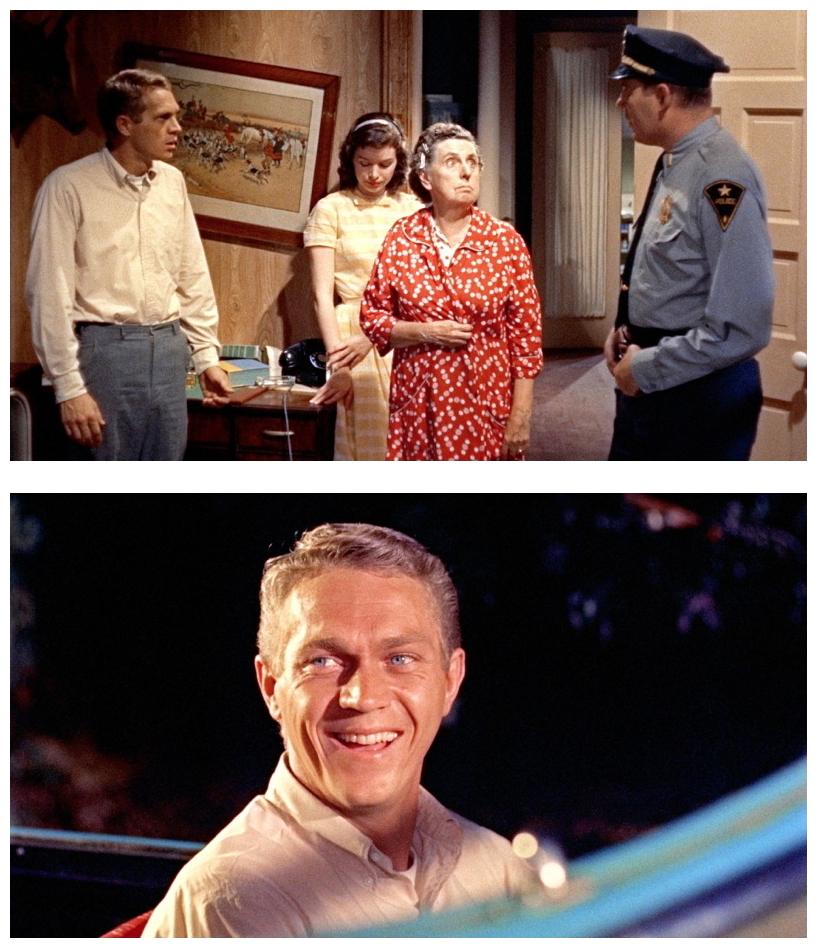 Meanwhile, just down the road, the blob squeezes into the Colonial Theatre to devour the projectionist before oozing into the auditorium, absorbing a number of the slower audience members. We feel Steve’s vindication as we watch the panicking survivors run from the cinema. Our heroes soon find themselves trapped in a diner while the blob, now enormous and blood-red from all the people it has consumed, engulfs the entire diner. The police intentionally bring down a power line in an effort to electrocute the blob, which not only makes it very angry, but also sets the diner on fire. While using a carbon dioxide extinguisher, Steve notices that it makes the blob recoil: “That’s why it didn’t come in the ice-box after us! It can’t stand cold!” To cut a long story short, Steve gets his message out, his friends confiscate all the fire extinguishers from the local school, the blob is eventually coaxed away from the diner, then frozen solid. The US Air Force arrange for a heavy-lift cargo aircraft to transport the alien life-form to Arctic wastelands, and the final title card ‘The End’ becomes a question mark. 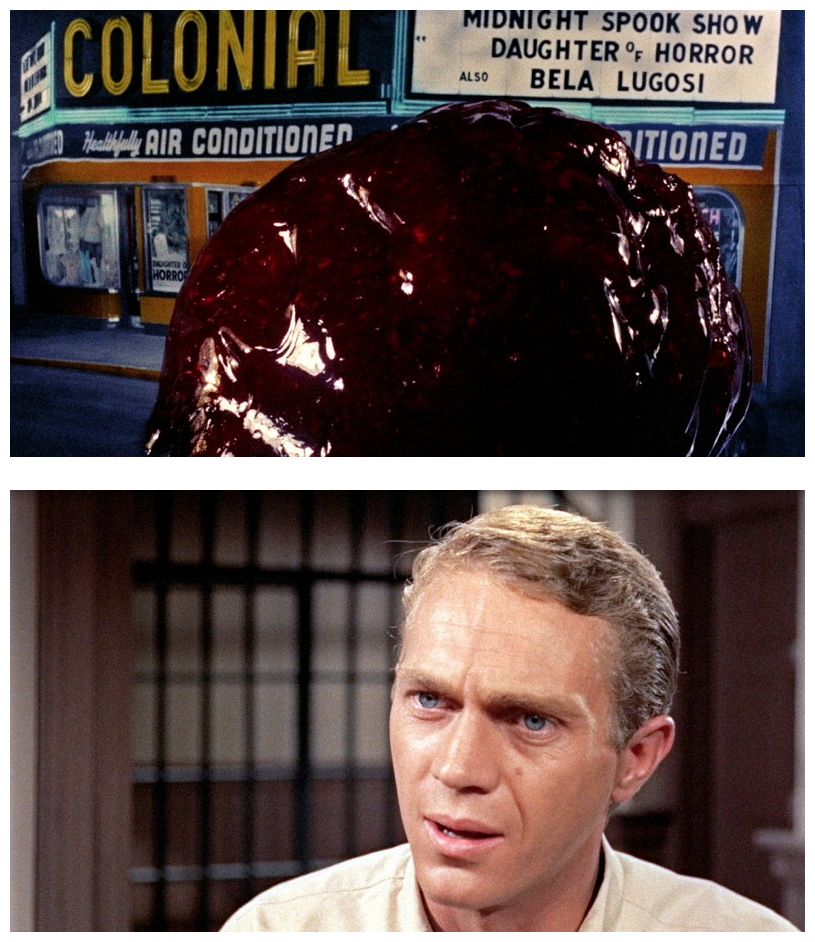 Bart Sloane is credited for special effects, and also served as the art director and animator. He created the animated opening sequence and main titles over which the credits were matted. His other animated sequences included the power cable being shot off of the pole and striking the blob, as well as creating all the matte paintings. For the diner scene, a photograph of the building was put on a gyroscopically-operated table onto which cameras had been mounted. The table was shaken and the blob simply rolled off and, when the film negative was printed in reverse, it appeared to be oozing all over the building. Photographed in and around Valley Forge in Pennsylvania by Thomas E. Spalding, the original film has become a local fan-favourite. BlobFest is a special annual event held in the town of Phoenixville, where certain exteriors were filmed, including the famous scene in which a herd of terrified moviegoers frantically flee a cinema that has been invaded by the blob. 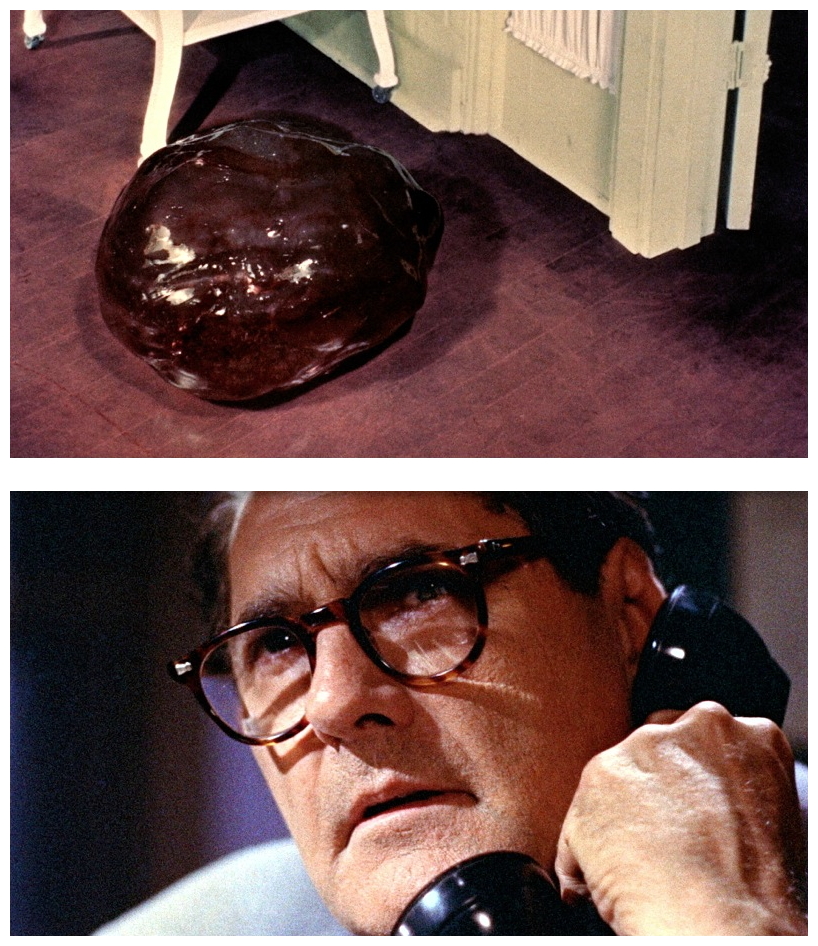 The three-day festival includes screenings of The Blob, era-appropriate cars and hot rods, Steve McQueen lookalike contests and, on display, the actual blob used in the film, a mixture of red dye and silicone which has never dried out and is still kept in the original five-gallon pail in which it was shipped in from Union Carbide. The Blob terrified moviegoers in both 1958 and 1988 (with a brief comedic stopover in 1972, but I’ll get to that later). The original film has a real low-budget sci-fi feel to it and, although campy, it’s still a lot of fun, with one of the most original concepts for an invading alien entity. It also tapped into the communist paranoia of the fifties and fears that the American way of life was being invaded by evil alien entities, attributed to the political turmoil of the Cold War at the time. 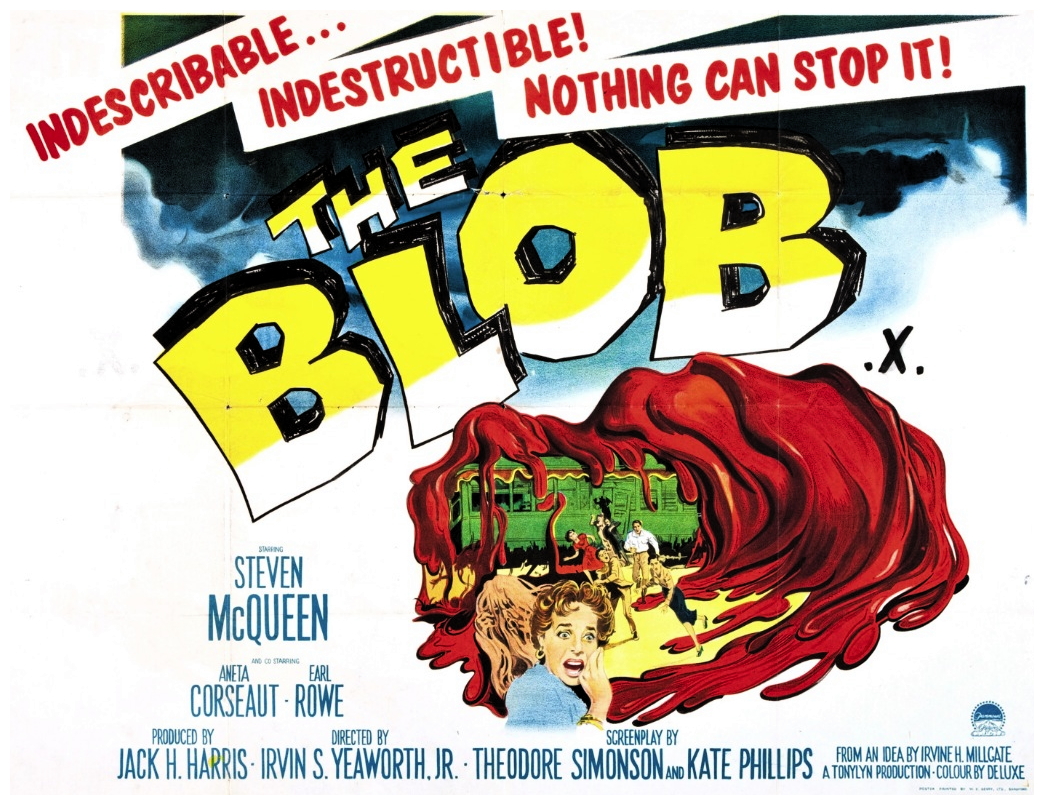 On the other hand, the remake of The Blob (1988) is far more bloody and gruesome, emphasising the gore and body-horror. An awesome if not entirely successful attempt, arguably more memorable and more shocking than the original, and it still holds up today (some terrific stop-motion and puppetry is almost ruined by being poorly filmed and chunky matte effects). The remake feels less like fifties sci-fi and more like David Cronenberg. There are some awkward changes made in the story (the blob is now an artificial man-made organism that has returned to Earth), but in both movies it’s up to the town’s teenagers, looked down upon by the older members of society, to stop the blob and put an end to its people-eating ways and, in both movies, the blob’s ultimate weakness is freezing temperatures. Recent attempts at yet another remake produced by Jack H. Harris, Richard Saperstein and Brian Witten have been delayed indefinitely again due to replacing director Rob Zombie with Simon West. Although not exactly ‘worthy of note’, Beware! The Blob (1972 also known as Son Of Blob) is a guilty pleasure that deserves mention, not so much for its depictions of horror and torture, but more for its reputation and behind-the-scenes chicanery. 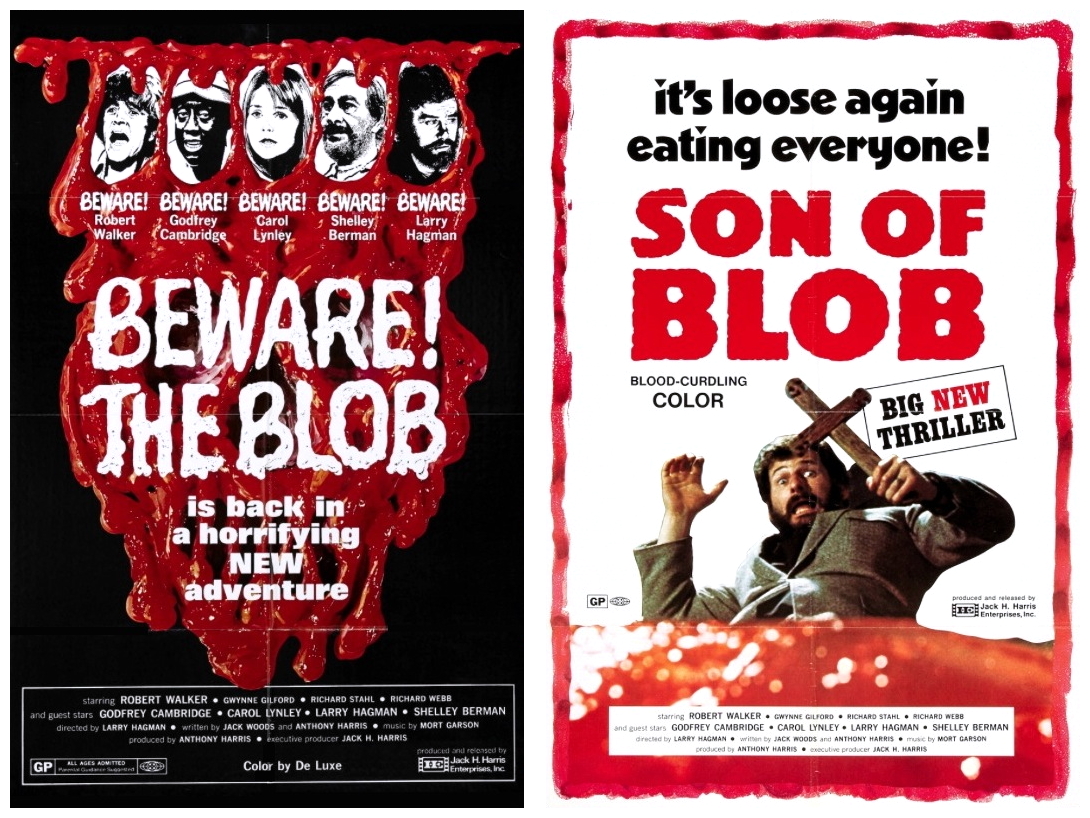 Famous I Dream Of Jeannie actor Larry Hagman was only ever allowed to direct one feature film, and never again, for reasons that should be perfectly understandable to anyone after watching it. The eclectic cast includes Gerrit Graham, Cindy Williams, Dick Van Patten, Shelley Berman, Carol Lynley, Rockne Tarkington and Sid Haig, with Hagman, Burgess Meredith and Del Close as a trinity of drunken hobos (Close’s hobo wears an eyepatch because the actor woke up that day with an eye infection and, when he got to the set, he was offered all manner of illegal narcotics to stem the pain. He was tripping off his face for the entire shoot). Famous cinematographer Dean Cundey – Halloween (1978), The Thing (1982), Back To The Future (1985), Jurassic Park (1993) – worked on Beware! The Blob as one of three technicians (with Tim Baar and Conrad Rothmann) responsible for creating the blob effects. Cundey was also the camera operator on second unit shots of the blob eating the fly, the kitten, etc. but that’s another story for another time. Right now I’ll ask you to please join me next week when I have another opportunity to force-feed you more unthinkable realities and unbelievable factoids of the darkest days of cinema, exposing the most daring shriek-and-shudder shock sensations to ever be found in the steaming cesspit known as…Horror News! Toodles! 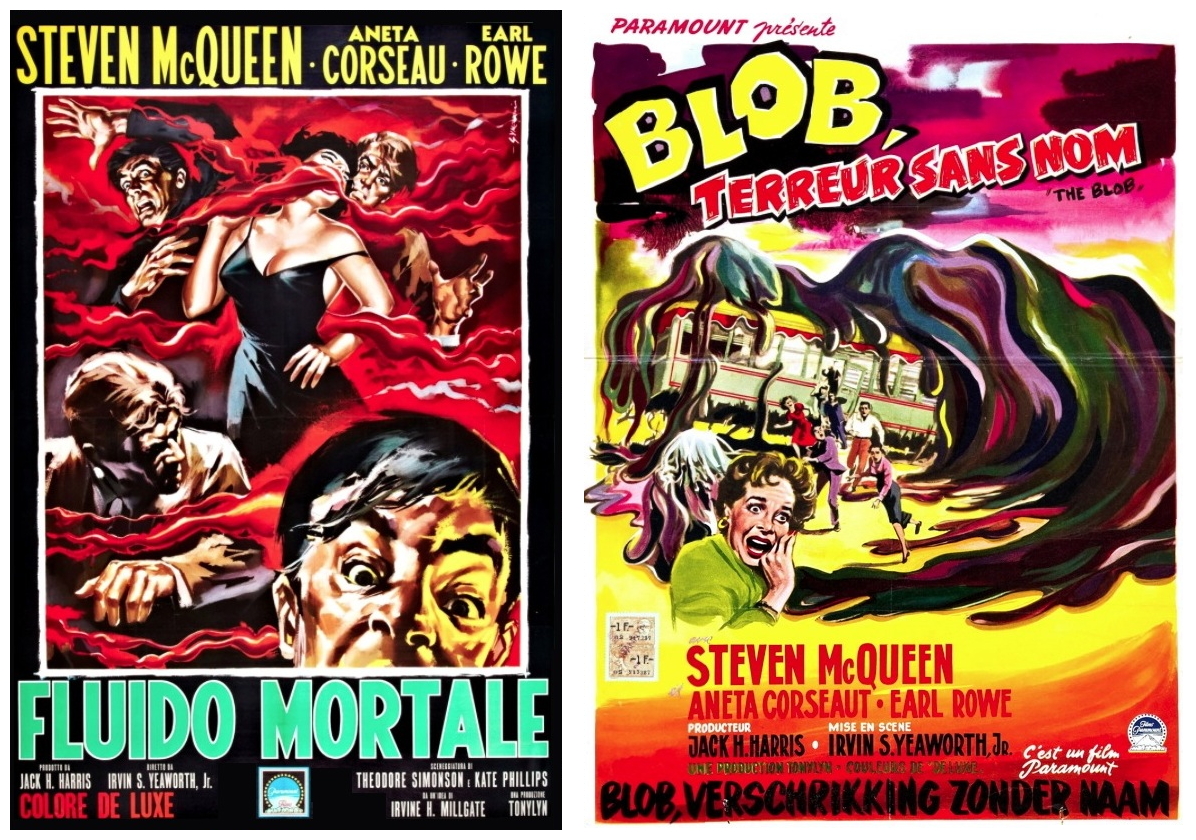 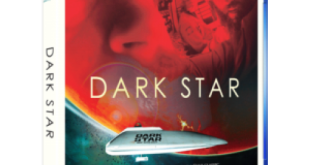