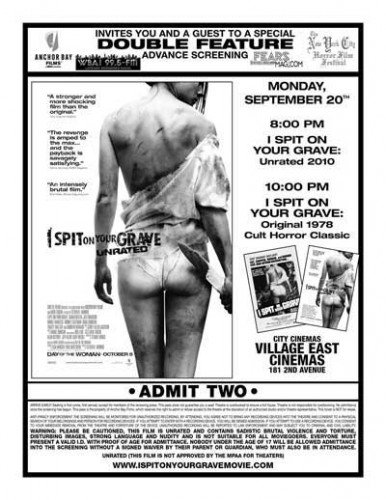 To celebrate, in conjunction with Anchor Bay Pictures and Fearsmag.com, we are throwing an “I Spit on your Grave” party in NYC. See the new highly buzzed remake and the cult classic together in one sitting… and you can see them both for FREE! Tickets for this event will be on a first come, first serve basis. Email NYCHorrorfest(at)aol.com to confirm your seats.
Sept 20th 8:00pm Village East Cinemas (181 2nd Ave)

A beautiful woman from the city, Jennifer Hills, rents an isolated cabin in the country to write her latest novel. Soon, a group of local lowlifes subject Jennifer to a nightmare of degradation, rape and violence. Left for dead, she returns for vengeance. Trapping her male attackers one-by-one, she inflicts acts of physical torment upon them with a ferocity that surpasses her own ordeal. When the carnage clears, victim has become victor. Praised by some as a feminist tract, reviled by others as exploitation, Meir Zarchi’s 1978 film I Spit on Your Grave was met with a firestorm of controversy that continues to this day. On October 8, 2010, Anchor Bay Films will release the Zarchi approved remake, and is poised to be as much a hot-button talking point as was the original.