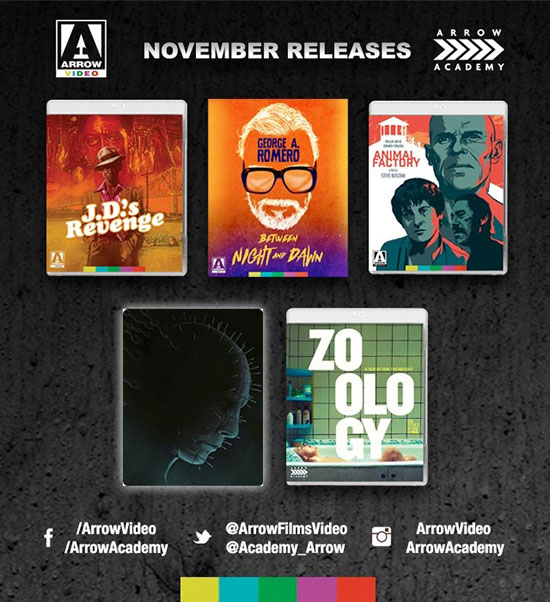 Winter chills just mean that it’s November, and Arrow Video are set to heat things up with a George Romero box set, a blaxploitation chiller, classic horror in steelbook form, a modern-day Russian black comedy, and a cult thriller directed by Steve Buscemi! With plenty of lavish packaging and limited edition items, Christmas has come early for film collectors!

Legendary horror cinema innovator, George A Romero, is responsible for arguably the most influential zombie films of all time. But he doesn’t just make undead epics, and the three films collected here in the box set George Romero Between Night and Dawn – There’s Always Vanilla, Season of the Witch and The Crazies – showcasethe versatility and dynamism of this American auteur. As well as the films there are Romero interviews and documentaries and much more.

Next is the stunning debut of of the blaxploitation favorite JD’s Revenge, a story about a man possessed by the spirit of a murderous gangster. Featuring Academy Award-winner Louis Gossett Jr (An Officer and a Gentleman), this is alternately tough and terrifying – a Blaxploitation gem waiting to be rediscovered.

Stephen King was once famously quoted as saying, “I have seen the future of horror…his name is Clive Barker.” That future was realized in 1987 with the release of Barker’s directorial debut Hellraiser. Introducing the world to the iconic Pinhead and his sadistic band of Cenobites, Hellraiser became an instant genre classic upon release and remains one of the most frighteningly original visions in horror. Now fans can own it in the form of an incredibly awesome steelbook with tons of extras.

The last of the Arrow Video titles for November is Animal Factory. Directed by Steve Buscemi, the film stars Willem Dafoe and Edward Furlong as they make their way through life inside a maximum security prison. This was Buscemi’s second stint in the director’s chair and sees him marshalling a formidable ensemble cast, for a powerful and sincere account of the men caught up in the penal system.

Finally, there is one release from Arrow Academy US – Zoology, an extraordinary film about a zoo worker who grows a tail, that proves that challenging, thought-provoking art house cinema is alive and well in the 21st century. In turns, disturbing, uplifting, and blackly comic, this is a challenging and irresistible contemporary fable, that deftly mixes the deadpan humour of Aki Kaurismäki with a poignant examination of social issues including loneliness and aging.