Celebrate 15 years of “Traces of Death” With This Collectors Edition DVD Box Set!
Packed with MORE CARNAGE, This Box Set Has Been Digitally Re-mastered!

Be Prepared for Close-up Shots of Exploding Limbs, Splayed Cadavers and Devastating Car Wrecks! And If You’re Still Not Satisfied By Then, We Have MORE!!! 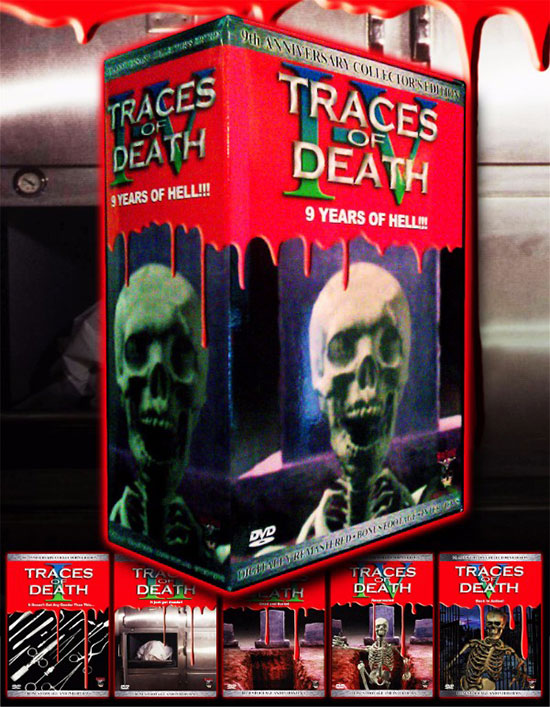 We are pleased to bring you this digitally re-mastered Traces of Death 9th Anniversary Collection Edition Box Set. Probably the best shock series available, Traces of Death is completely real. This is all real footage of things that made members of the Brain Damage Films staff physically ill. People getting eaten, cadavers getting poked at, cut up, embalmed… Gut wrenchingly disgusting footage that should never be viewed by anyone, ever. The box set includes the complete series, Volumes 1-5, plus BONUS footage and interviews!

Witness the horrifying death of a tourist as he is devoured and ripped into tiny pieces of mutilated flesh by a hungry pack of lions! Hear the hum of the coroner’s instruments as they tear through flesh and bone! Watch as the screen drips red with the blood of the innocent as a GIANT ROBOT TRANSFORMER goes crazy! See the gut wrenching torture inflicted by the El Salvadorian Death Squad! See mangled street thugs, puke-inducing amputations, blood-soaked car accidents and violated female murder victims!! See the infamous live highway car suicide! Take a Look into a dark and gothic counter culture known as suspension! And TONS MORE!!!