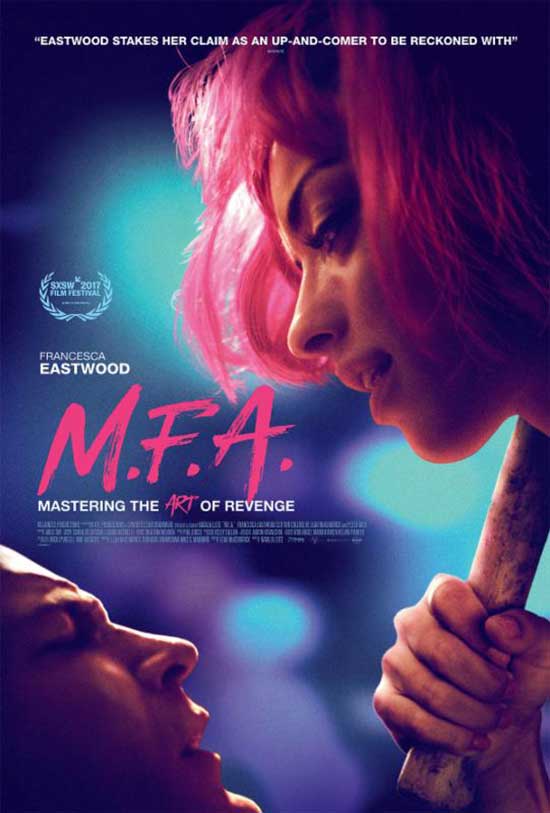 Dark Sky Films proudly announces the release date of M.F.A., a critically acclaimed powerful thriller starring Francesca Eastwood in a stand out role. The film, from female director and female screenwriter, takes on the searing current issue of sexual violence on campus. M.F.A. will be released on October 13th.

M.F.A., which was nominated for the Grand Jury Award at the 2017 SXSW festival, tells a gripping story of a young woman forced to take action to protect herself in “perhaps the bravest, rawest rape-revenge thriller yet” (No Film School). Noelle (Francesca Eastwood, Final Girl, Outlaws and Angels), an art student struggling to find her voice, is sexually assaulted by a fellow classmate. Attempting to cope with her trauma, she impulsively confronts her attacker, leading to a violent altercation that culminates in his accidental death. Noelle tries to return to normalcy, but when she discovers she is only one of many silenced sexual assault survivors on campus, she takes justice into her own hands. A vigilante is born – retribution is the inspiration she’s been waiting for.

M.F.A. was directed by Natalia Leite (Bare) from a debut screenplay by actress Leah McKendrick (Bad Moms). McKendrick also co-stars in the film along with Clifton Collins Jr. (Westworld, Knight of Cups).