“Leading Special Makeup FX studio Illusion Industries Inc. will premiere horror feature The Terror Of Hallow’s Eve at this year’s FrightFest, which takes place in London, UK, August 24 – 29. The Terror Of Hallow’s Eve combines mind bending practical effects, 1980s nostalgia and a relatable story with a strong anti-bullying message and will premiere at the festival on August 28, 2017 at the CineWorld Theater in Leicester Square. The premiere will be attended by Illusion Industries Inc. founders, Director Todd Tucker (whose special effect makeup work includes Charmed, Watchmen, G.I. Joe Retaliation and Ouija 2)

Todd- Hi Janel, How are you?

I am doing well. Thank you so much Todd. I’m excited to speak with you. I have been a long-time fan of the work you do. I know you have worked on everything from “Charmed” to “Watchmen.”

Todd- Thank you! That’s fantastic. You brought up “Charmed,” that goes back.

Okay, so I watched “The Terror of Hallow’e Eve” and it is so good. The right amount of creepy, great effects and a smart story. From what I understand it is also partially based on your life? Please tell us about it?

Todd- Long story short, everything that happened in the first three minutes of the film actually happened just like that for real. When I was about fourteen years old, I had a crush on the girl that worked at the local store where I got my monster magazines and I used to go in there and just stare at her and wish I could talk to her and I finally did. She was nice to me and I walked out, her boyfriend came in and she said I was a cute kid and he came back out and his buddies were waiting for me and they kicked the crap out of me for no reason.

Then I went home and I was beaten up pretty bad, I had a concussion and was bleeding all over the place. My mom was never home because she was a single mom working and I just remember being in my garage sculpting and bleeding all over everything and looking at the posters in my garage of monsters and just wishing, wishing, wishing there was some way I could turn into a monster and go back and just tear these guys apart. So I remember that so vividly happening in real life that when I started coming up with the concept for The Terror I felt that would be a good back story for the lead character Timmy. It would also force me to create something that is very real to me that would hopefully translate onto the screen and bring a certain level of passion to it that meant something. So that was really my goal and not just to make a horror film but to make something that people might actually identify with and feel something for the character before he does all his evil stuff.

You did an amazing job directing and all the actors did such a good job. You had such a great variety of actors.

Todd- Thank you, the casting was real important for me because, I was really concerned, especially with all the real stuff that happened. The back story of my childhood and my family and all the stuff that is in the first half hour of the film. I wanted to make sure that if I was going to spend the time to show all that that it was not only accurate to what I remember but if anything was underplayed as opposed to overplayed. I didn’t want it to feel corny. I wanted it to feel very real and as real as I remember it being real. So, even the bullies and everything.

That is what those guys looked like so I just went to the blueprint of my memory and tried to make it as real as I remember. And as soon as we get to the fantasy, dark and scary stuff, that entire part of the film for me was an homage to all the great eighties films that basically shaped me into what I do now. All the great John Carpenter films and “A Nightmare on Elm Street,” “Pumpkinhead” and all those great movies of the eighties and I really wanted to make a film that felt like one of those movies with my own story mixed in. That was the goal.

You are listed as co-writer and you directed “The Terror of Hallow’s Eve.” You have directed in the past. What was it like directing this film?
Todd- Yes, I directed a family film called “Monster Mutt” about seven years ago. That was my first film. I also produced and second unit directed a few films also which was me kind of getting the understanding how to direct and working my way in. This was different because with this film, I felt like I was more prepared than I have ever been before. I knew what I wanted. I had a specific texture and look because it was a 1980’s look for not only the scenes and the sets but for the characters and the creatures in it. So I had a very strong vision going into this. Which made it a lot easier to make what we made.

I know it is too soon right now but will there will be a sequel to “The Terror of Hallow’s Eve?”

Todd- Oh, absolutely! In fact a little bit of a spoiler, we come into present day and answers to the audience whether or not what we just experienced was part of a crazy persons mind or whether it really happened. We answer it at the very end. That is setting up the sequel for the next film which will take place in current day. I actually had an actor to play the older version of Timmy but his schedule didn’t work out so I ended up jumping in there and playing that myself.

I grew up watching Horror movies and my mom worked a lot as a nurse and she is an artist. She was a single parent so I could kind of relate to the film and loving horror movies.

Todd- Oh yeah, my life was movies. I had no brothers or sisters so on the weekends I would literally just go to movie theatre and spend the entire weekend just watching movie after movie or the same movie, depending on how good it was.

Do you have an all-time favorite horror movie that you never get tired of watching?

That is very cool!

What do you want to say to the fans and audiences that will be watching “The Terror of Hallow’s Eve?”

There is a lot of stuff that a lot of people have experienced in the real world that people who have seen the movie have come up to me afterwards and went wow, that one scene, I lived that scene so I know exactly what that guy felt like. I do believe that there are a lot of pieces in this movie that are going to make people feel very relatable. Once we get to the horror and fantasy aspects of it. I just went as cool and crazy as we could possibly go. We tried to come up with creatures that felt familiar but were unique in design so I wanted to create something for the fans that they would start to identify with and as soon as they did we just slapped them hard with great creatures and moments that make you feel like you are back in your childhood watching a 1980’s great movie again

There are so many great relatable moments in this film. It is a smart film with great creepiness.

Todd- I tried also to make it a little bit smart and there’s moments in there where I tried to make it so that you almost can’t tell whether our lead character is crazy and imagining things or whether it is really happening. So I tried to make it a little bit of a smarter story line that pays off at the very end and answers the questions, so I won’t leave you hanging. It’s been compared to “Stranger Things” with more monsters by more than a few people so it’s definitely more in that commercial world. It’s not a Rob Zombie type movie. It is more of a character driven movie but it’s nice to hear that you felt there were relatable moments in the film. That is what I tried to do.

Could you please tell us what you are working on next and talk a little bit about appearing as a celebrity judge on “Halloween Wars,” on the Food Network?

Todd- Oh yeah, so right now we are actually scripting “The Terror Hallow’s Eve 2.” So I am actually putting the script together for that one. We have a movie coming out this year that we did effects on a few years back called, “Geostorm,” which is a big disaster film we did a city of frozen people and animals. As far as “Halloween Wars,” I believe that actually starts airing in a couple of weeks. I am one of the celebrity judges for the whole season and it was a blast.

That was so much fun filming it. We filmed it in December, because we had to do it when the pumpkins were still ripe. So I’ve been waiting for a while for it to come out but it was so much fun and the contestants on the show are amazing. The displays that they made were truly mind-bending and how good they were. I think when people watch it they are going to really enjoy the level of quality. I brought a lot of props and puppets and a lot of stuff with me so they utilized a lot of things that I brought. So it should be a pretty good season with some good surprises.

You have had such an amazing career and you have done so many different projects. Do you have a personal favorite out of everything you have done and created in special effects?

Todd- You know I have to say just because it is so personally close to me I would have to say “The Terror of Hallow’s Eve” is probably my best creation with the help of a huge team of amazing people. By far I feel The Terror is what I am most proud of The Terror out of everything I’ve been a part of.

Thank you so much Todd. It was an honor to talk to you!

Todd- Thank you so much for interviewing me.

More Information on The Terror of Hallow’s Eve: 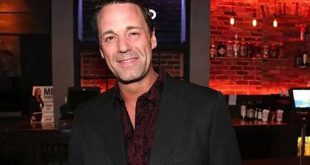