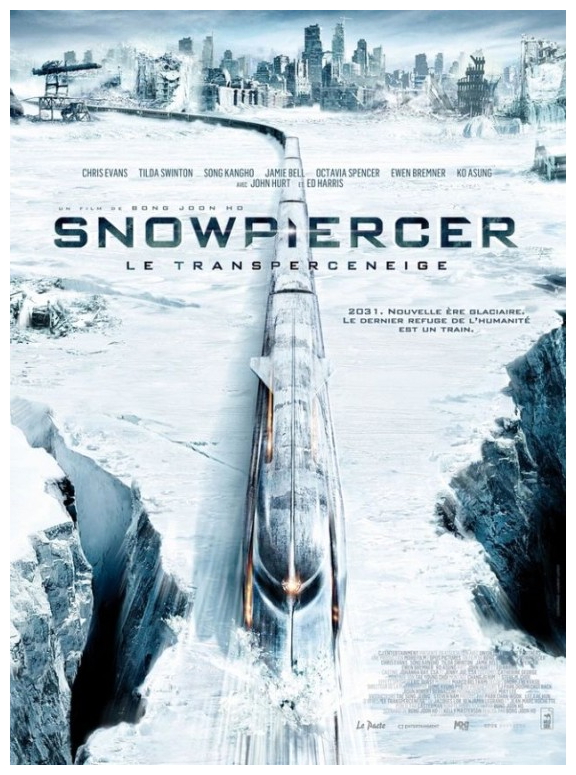 “The nation’s release the substance CW-7 with the intention of controlling the global warning, but accidentally it results in another Ice Age destroying Earth. The only survivors live in the train Snowpiercer which is driven by a perpetual motion engine created by the millionaire Wilford that lives in the engine part. In 2031, after seventeen years, there is a fight of classes inside the train since the oppressed lower class lives in dreadful conditions in the last wagons of the train while the elite lives in the front wagons. The lower class is fed with protein bars only; they are oppressed and punished by Minister Mason and her brutal guards, and their children are taken every now and then when they reach a certain height. The leaders Curtis Everett, Gilliam and Edgar are plotting a scheme to reach the engine and talk to Wilford about their conditions using the addicted security engineer Namgoong Minsoo and his clairvoyant daughter Yona that are imprisoned to open the locked doors. When the son of Tanya, Timmy, is captured by Mason, they decide to execute their plan. There are many casualties and soon Curtis discovers that they have been manipulated by Wilford to balance the resources in the train, and why the magnate keeps the lower class alive.” (courtesy IMDB)

Bong Joon-ho (Bong is his family name) is a South Korean filmmaker who has become known for choosing strong subject matter, dark humour and sudden mood shifts. After the true-life-inspired Memories Of Murder (2003) which brilliantly re-examined the serial-killer genre, Bong decided to tackle the monster-movie genre. He obviously enjoys breaking the rules of the genres he is working in, and it shows in the end result: “I don’t know why, but I love genre movies as much as I hate them.” Although The Host (2006) succeeds in offering the expected thrills, one can justifiably argue that its real richness lies in Bong’s audacious aesthetic choices and its changes in mood and atmosphere. The Host marked a step up in scale, both in Bong’s career and for the Korean film industry in general. The big-budget (US$12 million) work centred on a fictional monster that rises up out of the Han River to wreak havoc on the people of Seoul. After rushing to meet deadlines, the film received a rapturous premiere at the 2006 Cannes Film Festival. 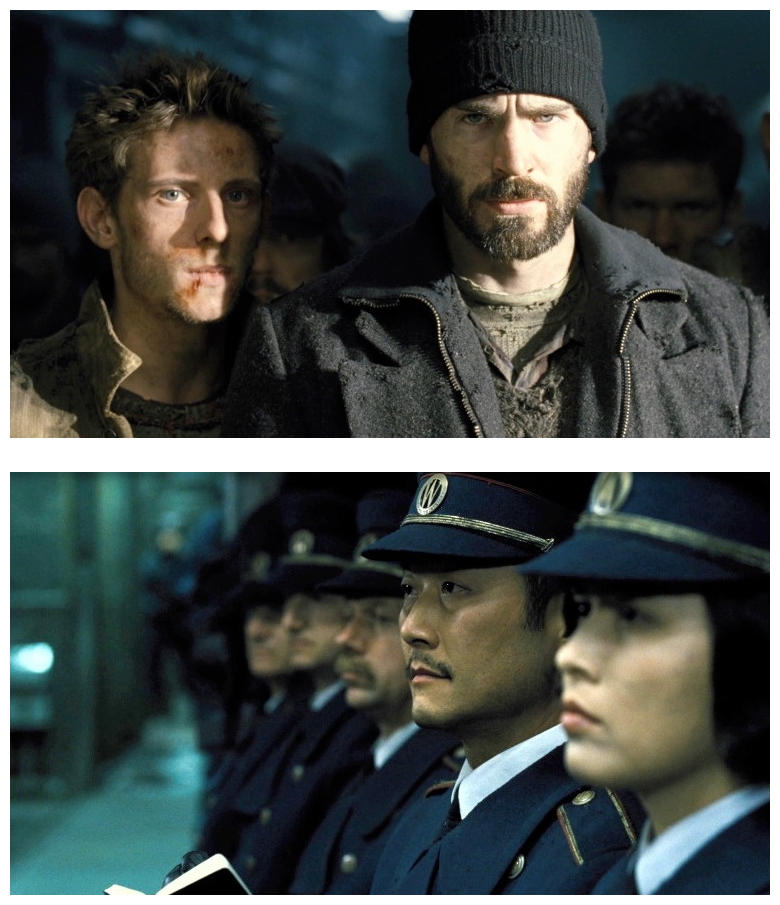 With cinema owners calling for more prints, the film enjoyed South Korea’s widest release ever (on over a third of the nation’s 1800 screens) and set a new box-office record with thirteen million tickets sold. A metaphorical post-apocalyptic horror-comedy set entirely on a bullet-train may sound a little strange, but Bong knew exactly what to do with his disparate elements when he began weaving this tale, based on the French graphic novel Le Transperceneiger. The dwindling remains of humanity are aboard an endlessly speeding train, which takes a whole year to make a full loop of the Earth on its transcontinental track. The lower-class citizens of the train live in the rear carriages, where it’s cramped and there’s nothing to eat except gelatinous brown protein blocks which wobble in our heroes’ fists with disgust (made from seaweed, tangle, sugar and gelatine, Jamie Bell hated it, Tilda Swinton liked it). 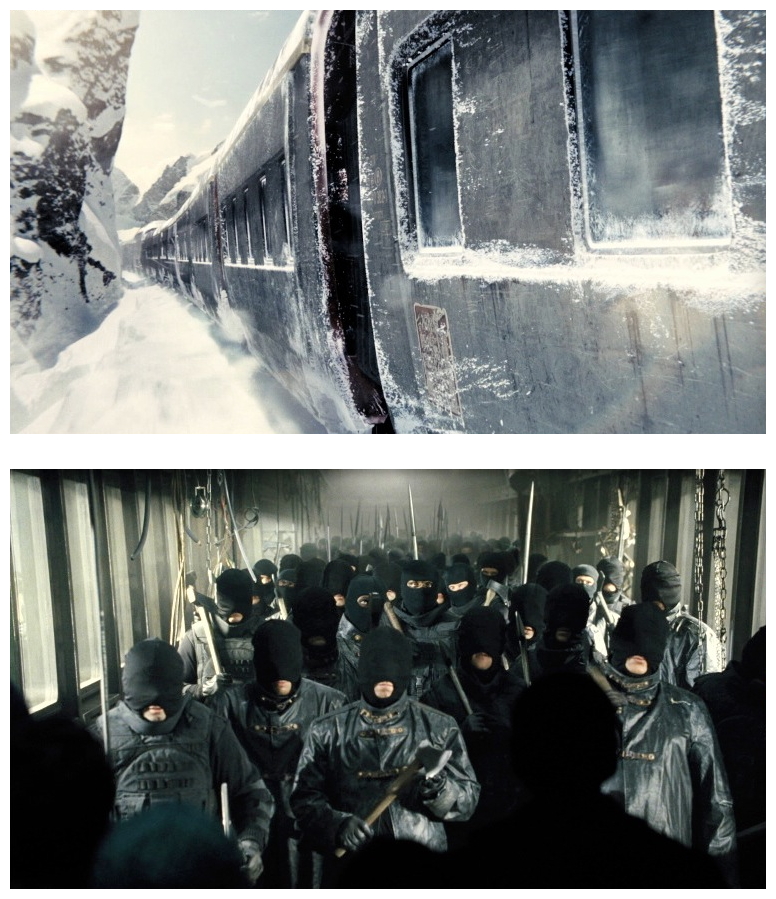 The upper-class citizens live…well, at first we have no idea how they live, except they’re in the front carriages of the train, and we can see their comparable comfort when their crisply-dressed leaders travel to the train’s squalid nether-regions to deliver protein bars, punishments, medical checks or to whisk away useful bodies, as they do with an elderly concert violinist near the beginning of the film. His wife is also a violinist, and he pleads with the armed officers for her to come with him, but they respond that they only want one, and deliver a nose-cracking baton to the wife’s face. But there’s a resistance brewing, led by Curtis Everett (Chris Evans, replacing Jake Gyllenhaal) and his eager disciple Edgar (Jamie Bell), as well as the ferociously determined mother Tanya (Octavia Spencer). For years these three and their fellow tail-enders have planned how to break through the automatic doors which separate each carriage of the train and disrupt the idyllic lifestyle of the front-enders, but they need help. 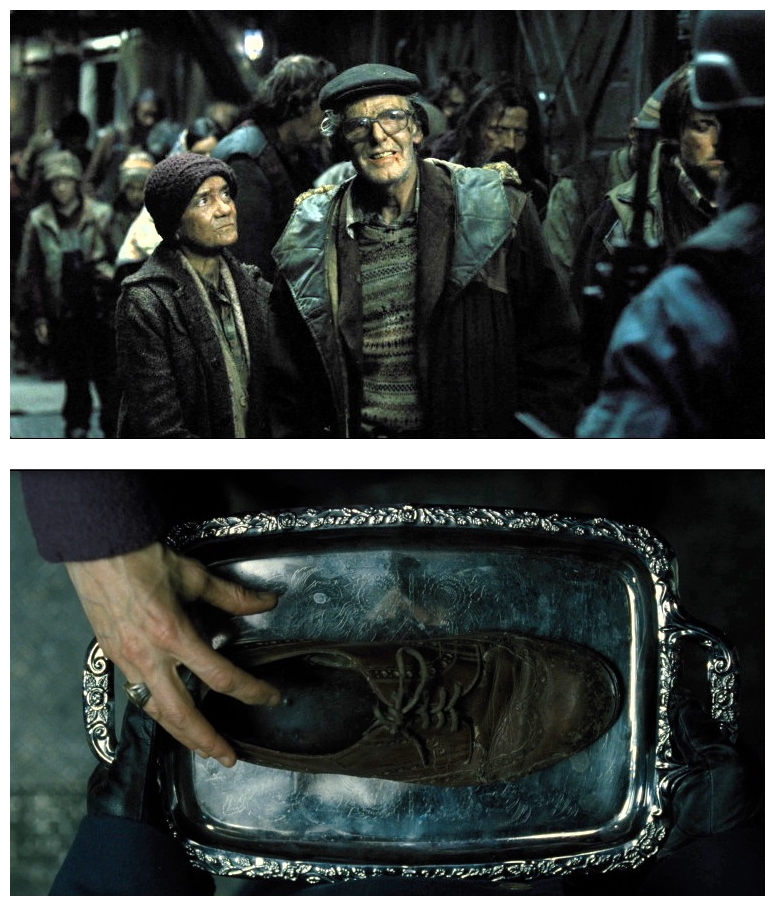 They know exactly where to get it too – enter Namgoong Minsu (Song Kang-ho), a security specialist who designed all the door-locking features of the train, but who is helplessly addicted to kronole – a soma-like drug of choice in the new world and, although highly flammable, the small rocks give users a hallucinogenic high when the scent is inhaled. For each door Namgoong unlocks, Curtis throws the man a chunk of kronole. In their way is a whole jamboree of armed guards, led by starchy Commandant Mason (Tilda Swinton) who speaks for the train’s highly revered inventor and driver, Minister Wilfred (Ed Harris). She is taken captive and Curtis, Namgoong, Tanya, Yona (Go Ah-sung), Andrew (Ewen Bremner) and Grey (Luke Pasqualino) continue on with Mason as a hostage. They travel through several luxurious cars and arrive at a classroom, where the teacher (Alison Pill) expounds to the children and the rebels on the greatness of Wilford and his ‘sacred engine’. While distracted by the celebration of the New Year marking another circumnavigation of the globe, the teacher ambushes them, killing Andrew before Grey kills her. 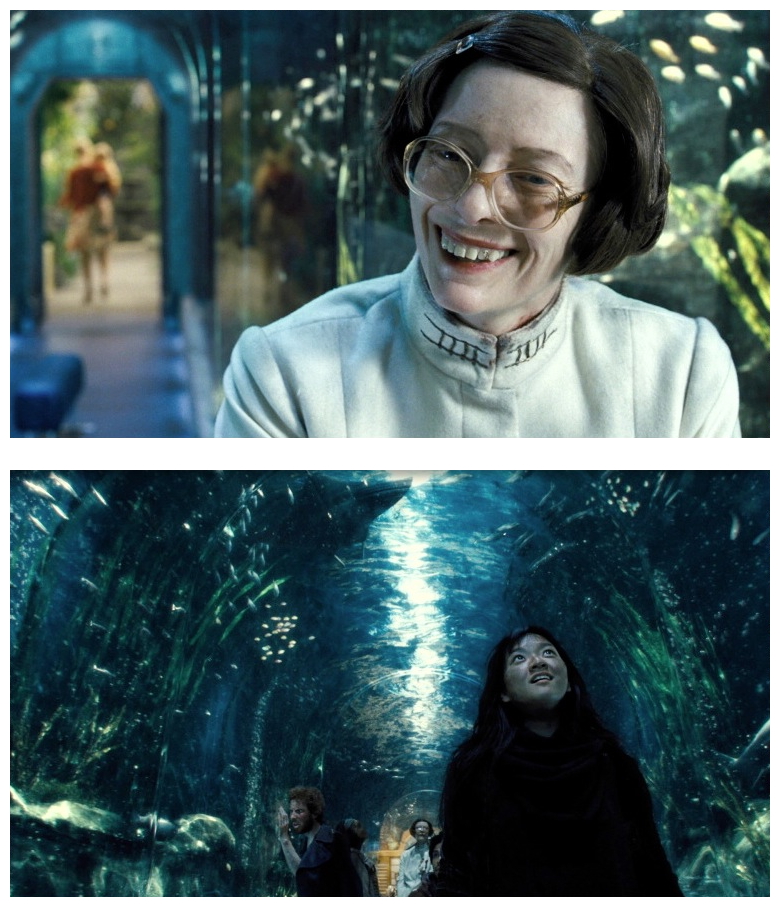 Further back, Franco The Elder (Vlad Ivanov) and Mason’s soldiers use the same distraction to kill the rebel army and many of the tail passengers. Franco executes Gilliam (John Hurt, replacing Dustin Hoffman) and Curtis kills Mason in revenge. The group of rebels continues forward, followed by Franco, which leads to a violent fight in a sauna carriage: Franco kills Grey and mortally wounds Tanya before Curtis and Namgoong dispose of Franco. Near the engine at the front, Namgoong notices that the world outside is thawing and plans to use the highly flammable kronole to blow a hatch to escape to the outside. Curtis confesses to him that, after boarding the train, the tail passengers resorted to cannibalism to survive. He was nearly ready to kill infant Edgar when Gilliam offered his own arm instead (the characters were named after Bong’s favourite filmmakers Terry Gilliam and Edgar Wright). After years of disdain for Wilford, Curtis is obsessed to find out what Wilford’s intentions are. The markings on the engine, a circle with a narrow ‘S’ on it represent the yin-yang, the same relationship between the front and the back of the train. The front can’t survive without the children of the back, and the back can’t survive without the food from the front, the ‘ideal’ symbiotic relationship. 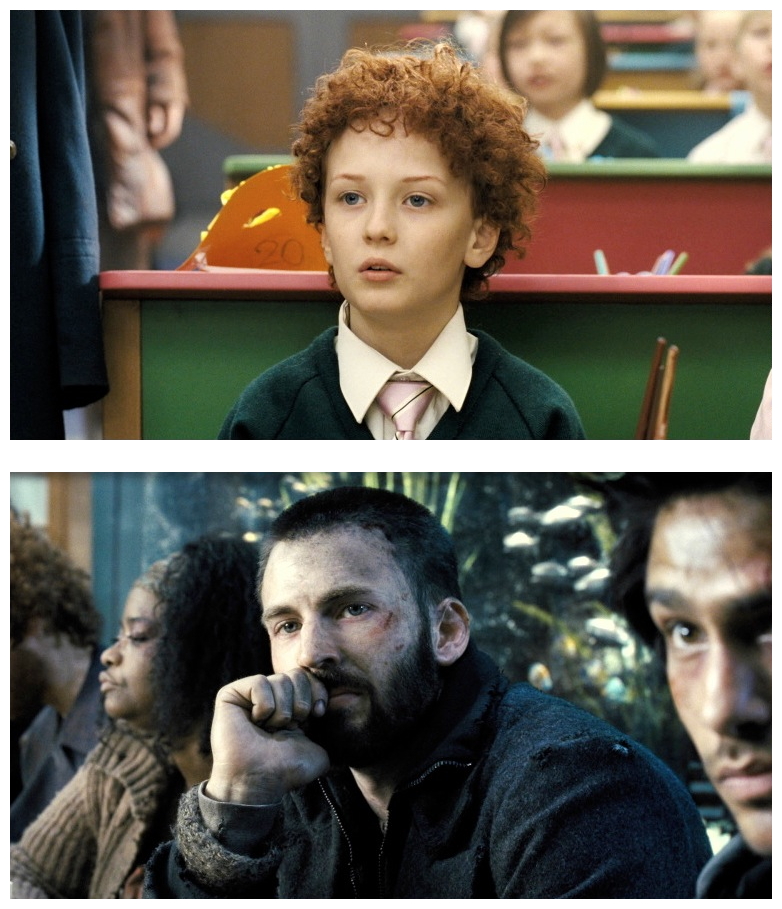 Director Bong delighted in working with his ensemble, but admits that his lead actor’s bulky Captain America physique was a problem – Evans had just starred in The Avengers (2012) and would appear in Thor The Dark World (2013) directly after Snowpiercer. “The only difficult aspect of shooting Chris was hiding all his muscle mass. We did a lot of things with costumes to make him look unhealthy.” Evans was impressed by The Host and, after hearing rumours about Snowpiercer, immediately contacted director Bong directly to audition for the part. The other lead character and somewhat dislikable anti-hero is Mason, the tight-lipped straight-laced commandant played by Tilda Swinton. Swinton is known as a master of disguise and in this role she really pushes her impression of the ‘British Toady’ to the limit, and had to spend two hours in makeup each day. Mason is the worst kind of sycophant – one with power who seeks to squash those who are in any way inferior to her, even in imagined ways. She’s posh and she sneers, but she’s also incredibly quick to sell out in order to save herself when she’s threatened. 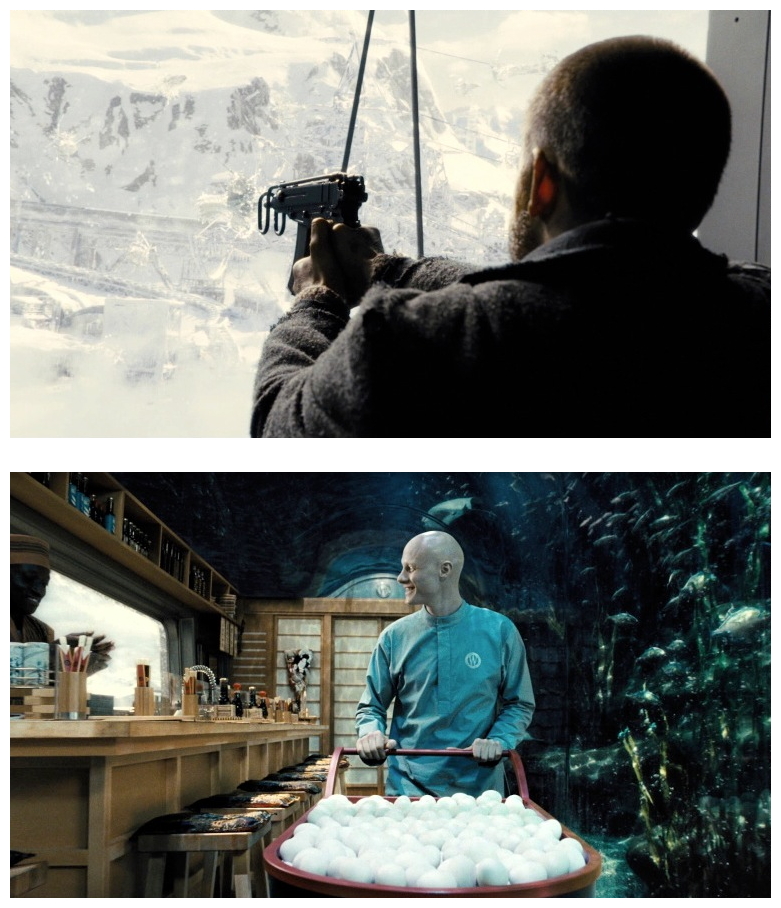 Swinton met Bong at the Cannes Film Festival several years before and ever since had been immensely keen to work with the director. Supremely undaunted by the fact there was no where to fit Swinton into the film’s narrative, screenwriter Kelly Masterson decided to simply change a major male character (to be played by John C. Reilly) to a female and slotted Swinton right in: “We didn’t change any of the pronouns. Everyone calls her sir.” In casting the rest of the train’s inhabitants, Bong wanted to reflect the kind of microcosm which would actually exist should a handful of people from a small number of nations be spared a widespread environmental catastrophe, namely Korean, Czech, English, Scottish, American, Icelandic, Romanian and Croatian. In terms of how to shoot all of these people on-set, Bong decided that computer-generated imagery was simply not going to cut it. Evans: “This wasn’t a movie that took place on a giant soundstage with a lot of green-screen. The sets were on a gimbal. Every set would shake and vibrate as if we were on a train.” 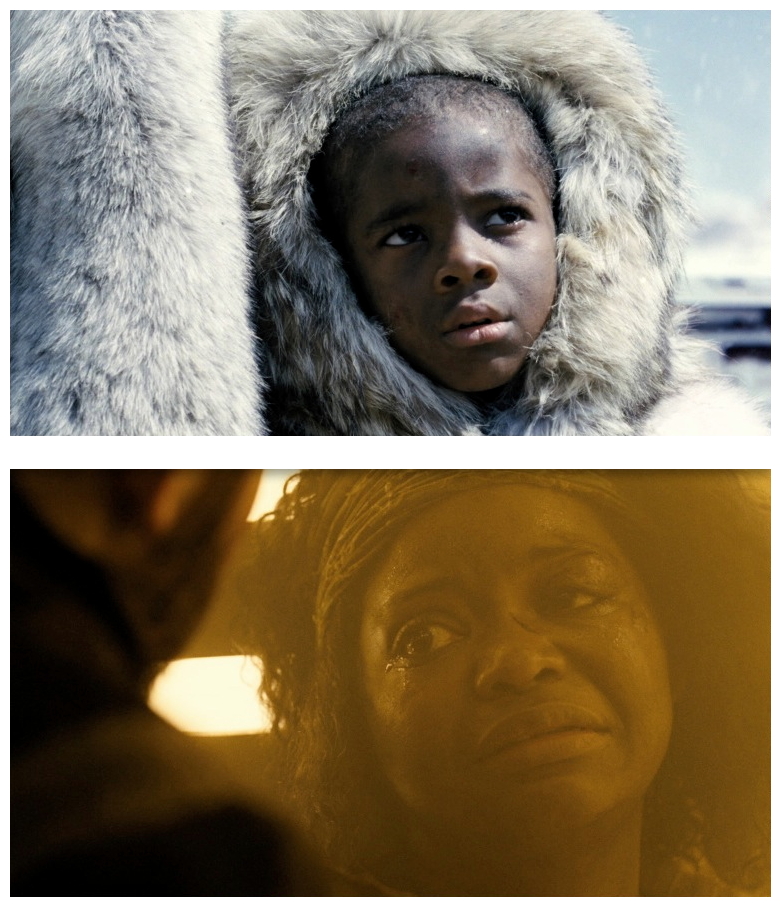 In the original graphic novel there were a thousand carriages, but Bong envisioned only about sixty carriages, of which twenty-six interiors were actually built. Full of moving drama, thrilling action, superbly weird whimsy, and more than a few twists, you could make worse life decisions than giving Snowpiercer a look. Bong’s next film, Okja (2017), premiered at the Cannes Film Festival and sparked controversy because it was produced by Netflix. It was met with boos mixed with applause, largely due to a technical glitch which caused the Netflix logo to reappear on-screen, and the first seven minutes were shown at the wrong aspect ratio. Despite these problems, the film received a four-minute standing ovation, and the festival later issued an official apology to the filmmakers, but that’s another story for another time. I look forward to your company next week when I have another opportunity to raise the hackles on your goosebumps with more ambient atmosphere so thick you could cut it with a chainsaw, in more pants-filling fright-nights for…Horror News! Toodles! 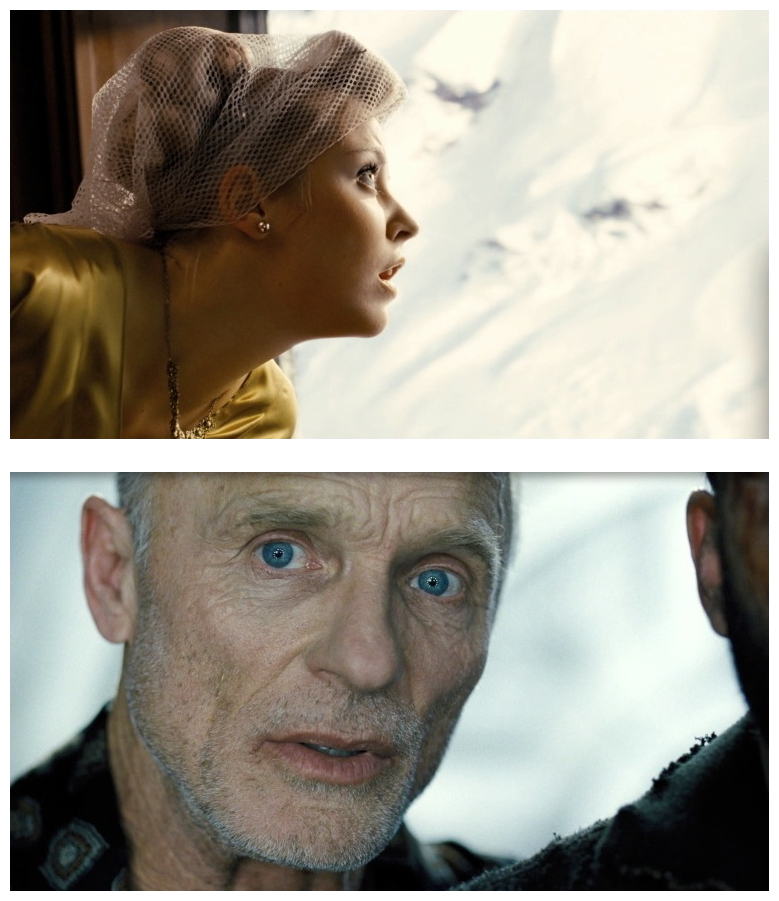