Top 5 Horror-Comedies of the Golden Age

Comedy and horror have been kissing cousins since the early days of cinema. Moments of humor have been the go-to safety valve that horror filmmakers have used consistently to relieve audience tension and to provide a break from the suspense and terror of the moment. Over time, the approach may have changed, but the general idea has remained remarkably consistent from the early days of cinema to today.

The dark humor of The Bride of Frankenstein, for instance, eventually evolved into movies like An American Werewolf in London, The Evil Dead 2, and Re-Animator: horror movies first but with a wildly comic spin at the same time. Early full-throated horror satires like The Cat and the Canary and the Abbott and Costello Meet… films eventually became modern classics like Young Frankenstein and What We Do in the Shadows.

It should be no surprise, then, that a separate and distinct subgenre would eventually evolve, fusing the horror film with the movie comedy, and for a brief, glorious period more than sixty years ago, the horror-comedy enjoyed a run of excellence the produced a string of enduring classics.

There was a time—a time that roughly corresponded with the long-past Golden Age of Horror—in which some truly great horror-comedies set a bar of brilliance that very few films in the subsequent decades have managed to clear. This period, roughly the late 1930’s to the early 1950’s, saw an explosion of outstanding horror-comedies that generally featured a comedy team or a comic actor thrust into a traditional horror scenario like a haunted house, a killer on the loose, etc. Some of these films include Hold that Ghost (Bud Abbott & Lou Costello), Spook Busters (the Bowery Boys), Spooks Run Wild (the East Side Kids), Arsenic and Old Lace (Cary Grant), Scared Stiff (Dean Martin and Jerry Lewis) and The Boogie Man Will Get You (the one that deviated further from the traditional formula than the others, but it starred Boris Karloff and Peter Lorre, so it gets a pass).

Even during the Golden Age, though, when so many of these films combined the scares and the laughs in perfect proportion, there were a handful of shining diamonds among the rest of the gems. The top five among them are—in chronological order—The Cat and the Canary (1939), The Ghost Breakers (1940), You’ll Find Out (1940), Abbott and Costello Meet Frankenstein (1948), and Abbott and Costello Meet the Killer, Boris Karloff (1949).

When The Cat and the Canary first opened on November 10, 1939, it was already the third big-screen incarnation of the 1922 John Willard stage play. Directed by Elliott Nugent and starring Bob Hope and Paulette Goddard, the 1939 film became the definitive version of the story and was the first film to establish blueprint for the horror-comedies of the Golden Age.

Set in an isolated mansion in the Louisiana bayous, The Cat and the Canary unfolds over the course of a single night, when the heirs to a reclusive millionaire’s fortune have gathered ten years after his death to hear the reading of his will. There’s murder, mayhem, and an unending supply of classic Bob Hope wise-cracks as he plays the pitch-perfect cowardly hero.

Even the better part of a century later, the brilliant juxtaposition of traditional horror atmospherics and melodramatic supporting turns combined with Hope’s excellent comic performance have made The Cat and the Canary a timeless classic. While everyone else is clearly acting in a traditional, paint-by-the-numbers mystery thriller, Hope quips and quakes his way through a high voltage, mile-a-minute comedy routine. It was not the first time that a comic star played horror for laughs—Buster Keaton and Harold Lloyd were among the silent era stars to test the formula—but as the first talkie to fully embrace the conceit, The Cat and the Canary set the stage for the Golden Age of horror-comedy. 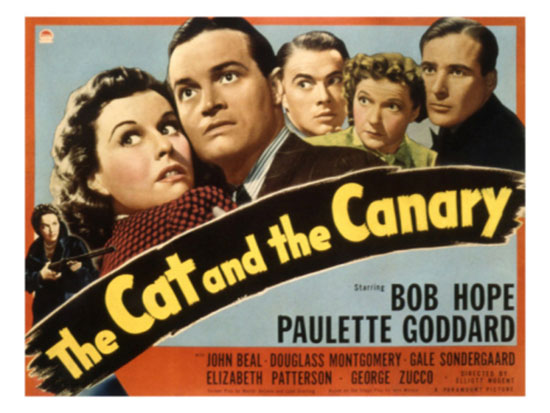 The formula of The Cat and the Canary worked so smashingly that, just a year later, the studio behind the picture, Paramount, repackaged Hope and Goddard in The Ghost Breakers, essentially a rinse-and-repeat take on their newfound horror-comedy success.

When scrappy New Yorker Goddard—“poor working girl, honest but tough,” she says—inherits a haunted mansion and plantation in Cuba, she sets off for the Caribbean to examine the estate for herself. Fast-talking radio star Hope, on the run after being mistakenly identified as a murderer, tags along with her and winds up determined to prove that there is nothing supernatural about the strange goings-on at the mysterious Castillo Maldito.

Like its predecessor, The Ghost Breakers works so well because of the explosively effective combination of the ghosts, the zombies, the creepy strangers, and Hope, who by now had perfected the screen persona that would come to define him: quick-witted but cowering, smug but self-aware, and always reaching—and often overreaching—for the next joke. 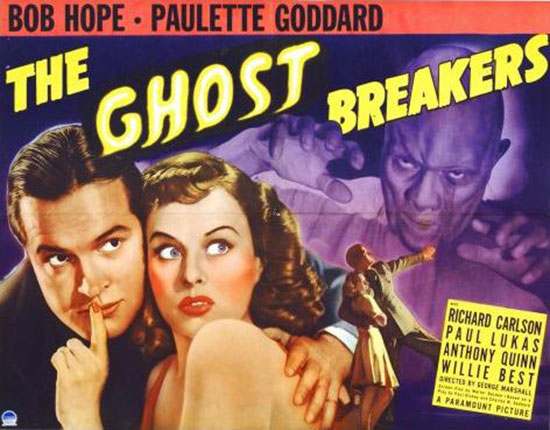 Easily the least known film on this list—and probably for good reason—You’ll Find Out may not be a particularly great film (maybe not even a good film, by objective standards), but it is a guilty pleasure noteworthy for the no-holds-barred campy performances delivered by the trio of horror legends, all in their prime, who star in the film:  Boris Karloff, Bela Lugosi, and Peter Lorre.

Band leader Kay Kyser—a popular figure in the 1930’s and 40’s—and his orchestra are hired to play the private birthday party of a young heiress at her family’s isolated mansion, where they uncover a plot to murder the beautiful heiress. Karloff, Lugosi, and Lorre play the motley crew of suspects who all may or may not be involved in the murder plot, a mystery that the bumbling musicians have exactly one night to solve.

Perhaps because Kyser and his crew are less known today than other comic entertainers of the era or perhaps because of the sheer silliness of the whole endeavor, You’ll Find Out will never be considered a classic in the league of the other films on this list. However, the trio of Hall of Fame horror stars and the undeniable laughs that the movie delivers secure You’ll Find Out’s place among the best horror-comedies of the Golden Age.

The film that many would anoint the greatest horror-comedy of any era and the one that has introduced generations of fans to both the horror and the comedy genres, Abbott and Costello Meet Frankenstein is an epically entertaining, goofily-delightful classic and the only film on this list to land on the American Film Institute’s 100 Funniest American Movies of All Time.

Florida baggage clerks Bud and Lou must make a special delivery to McDougal’s House of Horrors, a second-rate wax museum that has serendipitously come into possession of the remains of Count Dracula and the body of Frankenstein’s monster. Both creatures come to life, of course, and Bud and Lou become tangled up in a plot hatched by Dracula to coerce a mysterious mad scientist into putting Lou’s brain into the monster’s body. From England, Larry Talbot (aka the Wolf Man) has become aware of the plot, and he comes to America to help foil Dracula’s sinister plan.

Abbott and Costello Meet Frankenstein is a cinematic coup, matching up one of filmdom’s greatest comedy teams with the Big Three classic monsters of the Golden Age of Horror…all played by either the horror legends who originated the roles (Lugosi as Dracula and Lon Chaney, Jr. as the Wolf Man) or, in the case of Frankenstein’s monster, the man who assumed the role after Karloff left it and became a minor horror icon himself (Glenn Strange). With Lugosi, Chaney, Strange, and Lenore Aubert (as the mad scientist) all playing their monster roles 100% straight, they clash spectacularly with the manic slapstick brilliance and bitter love-hate relationship of Bud and Lou. 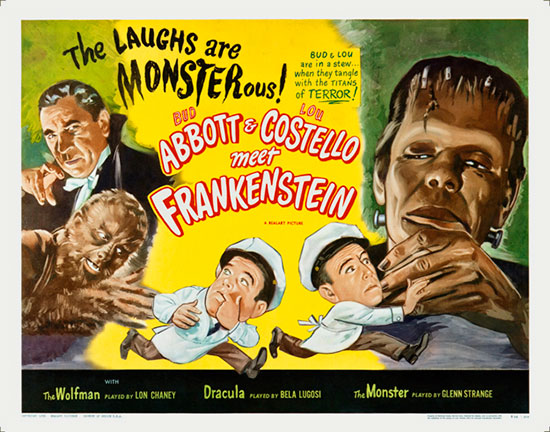 At the swanky Lost Caverns Resort Hotel, Bud is the self-satisfied house detective and Lou a hapless bellboy, and the two get caught up in the murder of a prominent criminal attorney. Complicating matters, a whole cadre of shady suspects happen to be saying at the resort, including Karloff as a creepy swami in an ill-advised turban and Lenore Aubert—returning after her success in Abbott and Costello Meet Frankenstein—as a seductive murderess who sets her sights on Lou.

Even for an Abbott and Costello movie, this one raises the stakes on silly, and the focus on comedy over horror nearly moves this one out of the subgenre entirely. However, the flights of comic fancy are deliciously inspired, none more so than when Karloff’s killer swami finds that his attempts to hypnotize Lou into committing suicide are no match for the simple-minded bellboy’s desperate sense of self-preservation. There were plenty of terrific horror-comedies in the 1930’s through the 1950’s, but Abbott and Costello Meet the Killer, Boris Karloff ranks among the very best. 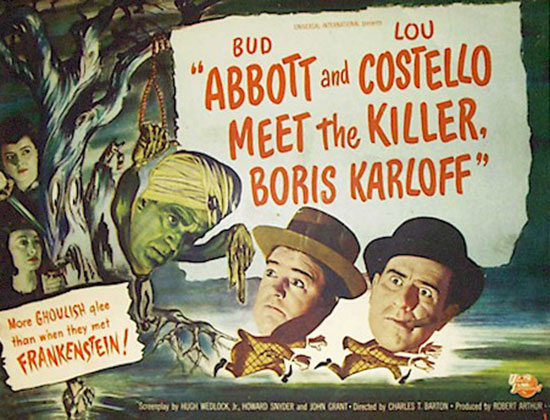 For many, Abbott and Costello Meet Frankenstein occupies the top spot in any evaluation of the greatest horror-comedies of all time, much less those from the era we are examining here. Perhaps because Universal Studios and its monsters were the kings of the Golden Age of Horror, or perhaps because of the brilliance of Bud and Lou, the 1948 classic is practically synonymous with the term horror-comedy, in the same way that most people call facial tissue “Kleenex”.

In the opinion of this critic, however, ranking the top five among these great films would be a fool’s errand, pure and simple, based almost entirely on the nuances of an individual’s personal preferences. Do you respond more to the verbal gymnastics of Bob Hope or the broad slapstick of Abbott and Costello? Are laughs your biggest priority, or do you prefer more balance with the scares? Do you award extra credit for sheer star power, or is it impossible to distinguish between the stellar casts that grace each film?