10 Reasons Why Suspiria is a Must See 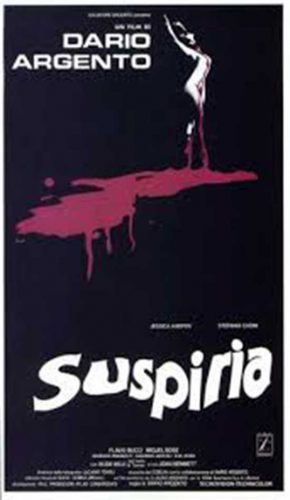 Greetings ghouls and ghoulettes, we’ve come to that time of the week where I step into the dark to show you the path to horror film glory. This week I’m going to give you my top ten reasons for why the 1977 classic film Suspiria, is a film that an adoring fan of the horror genre will eat right up. So without any further delay here are the top ten reasons why this film is not only a great horror film, but one of great artworks of the genre of horror.

At number ten the soundtrack for this film is truly powerful. This film has a very unsettling soundtrack composed by the Italian band Goblin and for those not familiar with this progressive rock band they aren’t really too bad. They create a soundtrack that creates an extremely disjointed and jarring atmosphere for the film. The music also adds to the tension from the very beginning giving us a taste of what it to come. The entirety of the soundtrack for this film is a tempest that gives way and then storms back with a vengeance.

Speaking of atmosphere, another great reason for you to check out this film coming in at the number nine slot is the truly disturbing atmosphere that this film brings us into. Director Dario Argento’s choice of setting is dreamscape that seems on the surface to be a rather droll place to have a horror film, a dance academy, but Argento turns this dance academy into a dreadful prison that has his audience on edge from the beginning of the film until the very end. The only thing worse than being the new student in town is when you find out that your room isn’t ready because they are still cleaning up the previous tenant.

Coming in hot on the heels of the dreadful atmosphere, at number eight the characters are incredibly interesting. Argento’s cast features Jessica Harper as the lead, but her foils Alida Valli Joan Bennet, and Lela Svasta, who play Miss Tanner, Madame Blanc, and Helena Markos respectively not only gel very well together on the screen their characters have you wanting more. Harper playing our heroine Suzy Bannion begins the film as an aspiring young American student of dance who is experiencing the pains of fitting in at a German school, but as the plot evolves we see her character evolve right along with it, a feat not often accomplished in horror films. On the other hand Joan Bennet and Alida Valli play their characters masterfully as they portray the charming, yet rather creepy head instructors of the school.

At number seven the beautiful cinematography really just cannot be oversold. This film is not only a gripping, rollercoaster of tension and fear, it’s an amazing piece of art as well. The opening scene alone will have those with a predilection for the art of great camera work and vivid imagery absolutely salivating. We have a beautiful opening kill in the film, in which Eve Axén, playing the role of the startled student, is gutted and hung after being swung through a window of stained glass, and into an abyss of color. Below her we are given a view of her roommate looking up in terror as the glass falls to impale her as well. The colors and the vibrant characters in the film shine bright with the great camera work done in this film giving us not only a feeling of dread, but filling us with awe.

The plot of this film takes us on a terrifying trip down the proverbial rabbit hole and that’s why it should come as no surprise that the plot of this film takes the sixth spot on our list of reasons why this film is a must see for the avid horror fan. We get a little bit of everything in this plot, the young girl in a foreign land, the new student, a slasher film- tease at the beginning of the film, and an unsolved murder that hangs over the start of the film. All of these themes are woven together to take the viewer on a jarring journey that leads them to a doctor who may not be what he seems, an academy that masks terrible secrets and a coven of witches bent on domination and destruction at any price. This film tells a story that lures the viewer in and doesn’t let them go, it grips them with its setting and the development of its characters not only scaring the audience at times, but making them want more.

Witches, murderers and spooky academies in foreign lands are definitely a good recipe for a horror film, but this film doesn’t stop there. At the number five spot, we have animals that both thrill and kill. Now I know what you’re thinking we’ve already got a killer plot, cool characters and a great setting. We’ve even got great music so we shouldn’t get greedy right? Wrong my friends this film lets you get greedy. In addition to a scene where the ceiling of our lovely academy bleeds maggots, and you read that right, we even get to see a man get his throat shredded by his own dog. Now that my friends is some good old fashioned entertainment.

We’re reaching the final four spots and we’ve saved the best for last. At the number four spot we return to the characters again to bring in something no great horror film should be without and that is very attractive characters. Let’s be honest if we are going to root for characters to actually make it out alive in a horror film we definitely want them to look great and our lovely heroine Jessica Harper fulfills those qualifications. She gives off a very girl-next-door vibe at the outset of the film, but then she surprises us all with her outright refusal to join the ranks of the other dead daisies in the film. She’s also got some eye candy co-stars for the girls in the film keep an eye out ladies.

Now we are in our top three spots and from here we are really going to get into the goodies. Speaking of goodies at the number three spot we have the graphic violence that really grips the viewer. Again I point to the iconic opening scene, the introductory scene of the film gives us a gruesome murder that culminates with the killer exposing the heart of the victim, before slipping a noose around her throat and throwing her through a window, ultimately killing her roommate in the process. We also are gifted the raising of a corpse and the brutal put down of the revenant at the hands of our heroine who plunges a blade through its throat.

Following the wonderful storm of bloodshed and body horror depicted in the film at the number two spot we have unpredictability meets shock-value. Some horror movies try their hand at shocking the audience with grotesque torture, body horror, or sudden jump scares, but Suspiria takes the shock factor to another level. One of the most terrifying scenes in the film has our heroine fall ill in class in a sudden, but violent seizure. She falls so suddenly and begins coughing up blood with no warning or explanation leaving us not only disturbed, but also stunned at the quick turn in her condition.

We’ve reached the end of our list and now the number one reason that this film should be on your watch list, this film makes us want to root for the protagonist. The horror genre is full of scream queens and filler characters meant to fill the body count, but only a few films give us a character that we actually want to win. Suspiria’s Suzy Bannion tugs at our heartstrings early and often and her evolution from naïve young lady to determined survivor has us on the edge of our seats rooting for her to circumvent the fate of an untimely and gruesome end. So if you’re looking for a film that will have you entertained or you’re just in the mood for a film that can bring you into another world check out this classic. You won’t be disappointed.