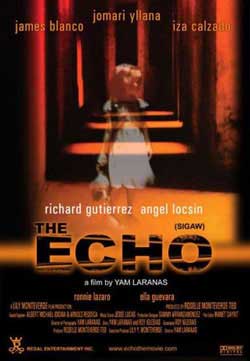 Marvin savors his independence in a newly acquired unit of an old apartment building. Except for the noise from an apartment unit down the hallway, the place is almost perfect. Soon a series of hauntings set into motion where Marvin is forced to make a decision to confront the evil that dwells within his apartment building which shakes the very core of his beliefs about life, love and the spirit world.

Examination: Can someone wake me up when this is over?

Note: The title Sigaw actually translates into “scream” in English but has been released as The Echo internationally to avoid confusion with the US horror film Scream.

First and foremost, whoever compared Sigaw to A Tale of Two Sisters and Audition must not have watched the same movie as I did. Yes, I heard the hype, the rave reviews, the coddling, all of which wanted me to watch this movie even more.. I couldn’t wait to finally see this shocking masterpiece from the Philippines that is rated within the ranks of Audition! Geez, was I let down. Essentially, what you’re going to get with this movie is an everyday ghost story of a battered woman, good acting, great cinematography, atmosphere, sound, and a stiff neck from looking at your watch wondering when will this ever end. In my case, I kept thinking about getting my laundry done. It is not scary, there are no twists, no turns, and you’ll be able to figure out the ending waaaaay before you get to it.

The story revolves around the lead character Marvin (Richard Gutierrez) and opens with great visuals of a low income, almost abandoned, shadowy run down apartment complex with a spiraling staircase from hell, and a squeaky elevator. The atmosphere is very creepy indeed. It is there that we meet the first occupants, an abusive, alcoholic policeman, Bert, (Jomari Yllana), his wife, Anna (Iza Calzado), and daughter, Lara (Ella Guevara).

Immediately after moving in, new tenant Marvin can hear Bert abusing Anna and Lara through the corridor, nightly. And Bert quickly gains the reputation for being an aggressive bully, inciting fear with whomever he encounters. I do have to note that the performances of Calzado and Yllana are phenomenal in their portrayal of suggesting the intent of abuse, without actually seeing physical violence, and are quite convincing.

Soon, Marvin begins to see things; a face in his water damaged ceiling, glimpses of Lara wandering about with her doll held closely, drizzled in blood or hiding under his bed, and eerie feelings that someone is in the room with him. You will notice some of these scenes borrowed from J-horror, but to a much less degree. Marvin starts losing sleep because of Bert’s nightly abusive tirades and begins complaining to his girlfriend Pinky (Angel Locsin). Pinky tries to talk him into moving, but he stays as he’s determined to see it through. Pinky unexpectedly stops by Marvin’s apartment one day and is shocked to see a strange woman knocking on his door. She suspects Marvin is seeing another woman, which could explain why he has been acting strange. Marvin denies seeing another woman and convinces Pinky that it is the weird occurrences in his apartment that have been making him act strange lately.

Bert begins to believe that Lara is not his daughter and that Anna is having an affair. The violence between Bert and Anna increases when Anna asks a neighbor, Jude (James Blanco) for help. At first, Jude befriends Anna. She begins to trust and depend on him. But during a moment of climax, Jude refuses to help her. Anna begs and pleads while knocking emphatically at Jude’s door, begging for help as Bert approaches her with mal intent. Both Jude and Marvin’s cowardice, and refusal to open the door, is humiliating to watch. I almost couldn’t take watching them hiding like scared little rabbits as Anna endured such abuse. I wanted to jump in and help her myself. Calzado’s portrayal of Anna’s helplessness, vulnerability, fear, and pain, again should be noted.

Eventually, after enduring nights of sleeplessness, weird occurrences, and complaints to the building caretaker (Ronnie Lazaro), a drunk, who just tells him to ignore the disturbances, Marvin begins searching for answers where discovers the truth about Bert, Anna, and Lara. And after a very lengthy search, which extends outside the confines of the apartment building, a poltergeist beating, and a stalking spirit in a toilet, he finally makes the right decision for everyone by confronting the problem head on.

If you’re looking for a ghost story, minus the fear factor, this is a decent film. It’s good in the fact that it tells an interesting ghost story with minimal special effects. But, if you’re the type of Asian horror fan that loves a degree of intensity, you may find this film boring. 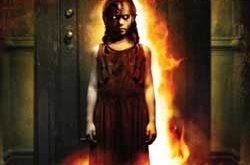