Home | The Follower – Psychological Thriller Available for Digital HD and On Demand, April 18

The Follower – Psychological Thriller Available for Digital HD and On Demand, April 18 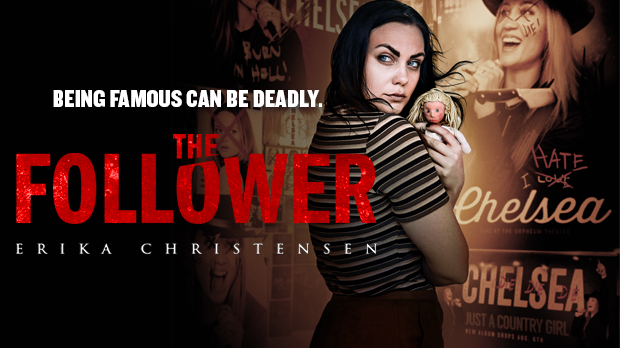 Psychological Thriller Available for Digital HD and On Demand, April 18

FILM SUMMARY – On the last night of her tour, country-pop superstar Chelsea Angel (Erika Christensen), announces to her fans a much needed break from her music career to focus on her family and soon-to-arrive baby. Tragedy strikes when her flight home crashes into a remote wilderness. The only other survivor of the crash, Evelyn King (Bethany Lauren James), who happens to be a huge fan of Chelsea, pulls her to safety. Hurt and unable to walk, Chelsea needs Evelyn’s help to get to a nearby cabin. As Evelyn cares for Chelsea’s wounds, she becomes increasingly unstable and obsessive and Chelsea begins to realize that her caretaker may have more sinister plans in store. Racing the clock, she must find a way to overcome her injuries and escape from Evelyn, whose insane adoration could ultimately lead to Chelsea’s demise.

PLAYING VILLAINS- “Think Misery with Kathy Bates. What I love about playing antagonists or ‘villains’, is that you must find all of their humanity: hopes, dreams, and fears,” says James. It’s fun to find what makes them laugh or makes them cry because it’s often not a typical trigger. But in finding those things you can create full and dynamic characters. If the audience can understand Evelyn and her actions, and even empathize, then I’ve done my job.”

WORKING WITH JAMES & CHRISTENSEN – “Bethany is one of the most amazing people I’ve ever worked with both on and off camera,” says Director Damián Romay. “There are some scenes in the film where I was getting chills during the take just experiencing the power of her performance. The movie is an engaging indie thriller and when people see Bethany they will be blown away by her talent.”

“I wish I could someday do for someone what Erika Christensen did for me,” says James. “She is so dedicated to finding the best story, and her character work is so thorough and layered – it was such a gift to get to work with and learn from her.”

BETHANY LAUREN JAMES was born in Toledo, Ohio to Kathy, an elementary school teacher, and David James, a doctor. She got her start in local theater at the age of 10. A talented singer, dancer, and actress, she went on to get her BFA in Musical Theater at The Hartt School, landing her first national tour soon afterward. For her work in the play The Sword Politik in the Midtown International Theater Festival NY she received a nomination for ‘Best Supporting Actress in a Play or Musical,’ and she won acclaim for being “a true chameleon.” She made her screen debut in the BroadwayWorld.com Exclusive Series, So Ya Wanna Be a Broadway Star?, and she then focused on more psychologically challenging roles. Represented by Prestige Management. Next, James will star in Overcome, at the Best Of AGR Festival, April 20, 2017, a short directed by Paul John Cook and written by Jewel Donohue (Exposed).