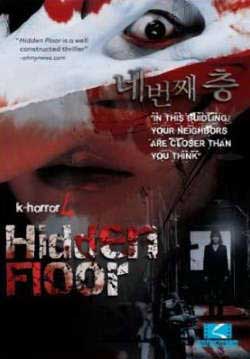 A mother and her six year old girl move into a new building. A tenant who lives below her complains about noises coming from her apartment. Even though she lives very quietly, the complaints of noise continue.

The mother soon realizes everyone in the building acts bizarre to the point of being scary. The six year old girl soon begins acting like the other tenants. Then, mysterious deaths begin to occur in the building. The mother must solve this mystery of these deaths and strange behavior before it’s too late.

“Hidden Floor” basically plays as a greatest hits package. It draws elements from many of the modern Asian horror films that have flooded the market the past decade, most notably “Ju-On: The Grudge” and “Dark Waters”. Though the film lacks any real originality, it does manage to entertain throughout.

It moves at a brisk enough pace that it never feels dull, as well as creating a strong dynamic between mother and daughter, which is the driving force within the film. The film, aka “Forbidden Floor”, is directed by first time director Kwon Il-Soo and is part of “One Day Suddenly: 4 Horror Stories, a Korean horror (K-horror) collection produced by Ahn Byung Ki, director of “Phone”, as a chance for young talent to get their first chance behind the camera.

Min Young is a single mother who has just moved into a new apartment complex in order to be closer to her job that she is very devoted to. Her six year old daughter Ju-Hee spends most of her time fending for herself.

They have a strange neighbor who lives below them that complains of all the noise coming from their apartment. They live a very quiet life and Ju-Hee is very well behaved. She talks of the noise coming from below them. The strange noises begin, the long haired (are there any other kind) ghost that pops up, the young boy peeking around corners, Ju-Hee’s behavior becomes unpredictable, and sores begin to appear on her arms, ones that are only associated the asbestos contact. 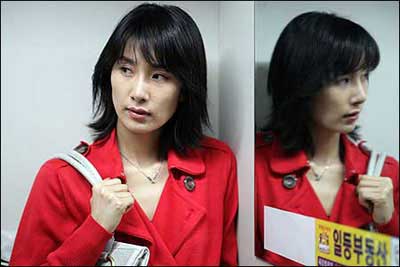 This leads Min Young to investigate the building, afraid for her daughters safety, she begins to uncover the truth, even if it jeopardizes her chance to advance at work or even lose her own life.  There has been such a saturation of these films on the market that it is tough to enjoy them anymore. There are copies, sequels, remakes, and it isn’t much fun sifting through the bad ones. After viewing “The Grudge 3” (technically not Asian but it still should fall into the same category), I was ready to give up on these type of films.

That is a prime example of borrowing from other films and pretty much stomping and sh*tting all over everything that came before it. I am happy to say that with “Hidden Floor”, which borrows heavily from several other films, knows how to use the ideas and piece them together in a way that is sure to entertain and maybe even make you jump a little. Especially with the use of sound effects, noises, crashes, musical cues, that are just a bit louder than everything else and hit you when you don’t expect it.

Kim Yoo Jeong who plays Ju-Hee is a solid young performer. She goes from the cute innocent little girl to the evil little brat with ease and hopefully has a long career ahead of her. Kim Seo-Hyeong as Min Young has just the right amount of innocence, drive, and determination to pull off the role. Their relationship together, their dynamic works just when it is supposed to and what is most important to a film like this. Once the setup is revealed, their really is no big mystery and it’s easy to see where everything is going but the mother daughter relationship saves the film.

“Hidden Floor” takes an interesting idea, even though it is never fully used to its full potential, and mixes it with some of the most un-original setups and pieces together a film that delivers when it needs to. It isn’t top of the food chain but it does manage to keep your focus and provide you with a couple of cheap thrills. You can tell that, even if it was small on budget and had time constraints, Kwon Il-Soo has talent and if he continues to work in the genre may grow into a interesting filmmaker. “Hidden Floor” has just enough scare power to pass a night away. Check it out.