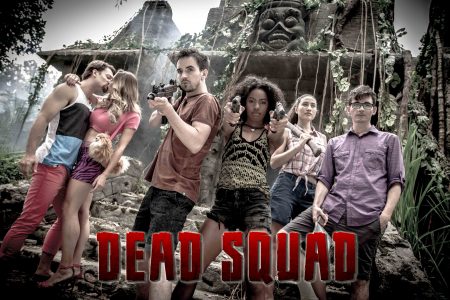 Principle photography of the camp horror film “DEAD SQUAD” has commenced in the Balinese jungle.  Towering Aussie giant Conan Stevens, known for “GAME OF THRONES,” is on location to play the mysterious character called ‘Z-13.’  He is joined by the world’s tallest model Erika Ervin, aka Amazon Eve, from “AMERICAN HORROR STORY: FREAK SHOW,” in the role of a ‘Zombie Queen.’

First time helmer Dominik Hauser, who co-wrote the script, describes the roles of the towering stars as being “The King and Queen of a weird Dantean underworld.  We’re doing things with them you haven’t seen before.”

Stevens and Ervin are supported by a wide array of bizarre creatures.

Bigger ever than the stars are the giant stage sets constructed at Movie Studio Bali making the hellish underworld a reality.

Hauser promises the film will be an epic zombie splatterfest.

Orlando Bassi of Movie Studio Bali, and Christopher Hatton, producer and director of “BATTLE OF THE DAMNED” are producing.

“DEAD SQUAD” is a campy, splatter-filled, horror adventure that harkens back to classic films of the early 80s.  It concerns a group of young people who become lost in the jungle during a river rafting trip and stumble upon a long lost ruin that is home to a host of mysterious monsters.