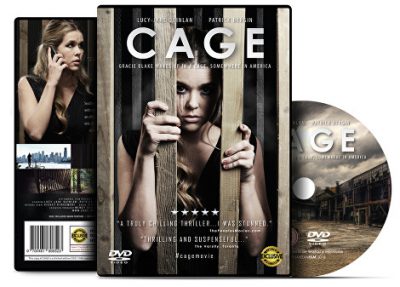 Cage follows Gracie Blake (Lucy Jane Quinlan), a Seattle based chat line worker, who following the decision to meet a new client, finds herself waking up in a cage, in a warehouse, somewhere in America. At first Gracie struggles to understand her situation, yet soon realises she needs to quickly find an escape, as the audience are drawn ever deeper into her plight and this terrifying, claustrophobic, modern kidnap drama
Shot in the UK last year, the movie features just one actor on screen – Lucy-Jane Quinlan and also voice stars Patrick Bergin (Sleeping With The Enemy)
Cage is directed by Warren Dudley who said of casting his second feature, ‘when the opportunity to work with Patrick came about I recalled his character from Sleeping with the Enemy and wondered what if he hadn’t died?” Bergin added, ‘Warren and I debated where we wanted the character of Peter to go and Martin Burney was discussed’. I think what Warren has created is a quiet masterpiece’.
‘Cage’ is Warren Dudley’s second feature and follows 2015’s acclaimed ‘found footage’ horror The Cutting Room. Warren is also the writer on The Bromley Boys – a football memoir set in the 19070’s starring Alan Davies and Martine McCutcheon which is set for a UK cinema release in September 2017.
Share