Have a Photo of yourself featured in Crepitus starring BILL MOSELEY 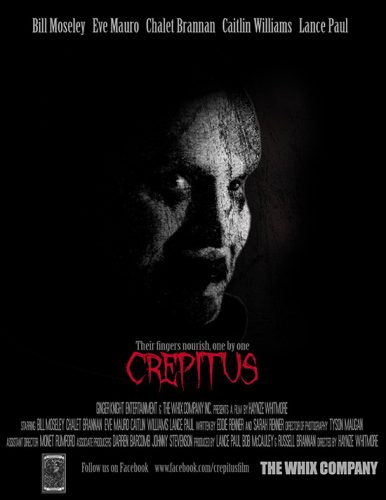 Ginger Knight Entertainment is holding a contest that will allow four people to have a photo of themselves (from the age of ten) include in a sinister family album that is featured in the film Crepitus.

Ginger Knight entertainment has recently finished filming one of two shoots for Crepitus, starring Bill Moseley(Texas Chainsaw Massacre 2, House of 1000 Corpses and Devil’s rejects, Repo! The Generic Opera, Army of Darkness), directed by Haynze Whitmore. This is Haynze Whitmore’s directorial debut for a feature film. The film is being shot entirely in Cheboygan, MI.

The remaining shoot will happen in the spring/early summer, also in Cheboygan MI.

The screenplay was written by Eddie and Sarah Renner.

Seventeen year old Elizabeth and her younger sister Sam are thrust into circumstances more terrifying than life with their abusive, drunken mother when they are forced to move into their deceased Grandfather’s house. Frightened beyond belief, they are forced to learn horrible things about their family history. Never mind the ghosts in the house, there is something far worse that takes an interest in them … a cannibalistic clown named Crepitus.

(GKE) was built on their managing partners buzz and success. Producing Partner Lance Paul’s past films he helped produce “Realm of Souls”, “Buried Cain”, Creature Feature” and “Dark Roads 79” are all different stages of Global distribution. GKE is now putting their efforts into this production venture with the intention to produce a feature length motion picture entitled “CREPITUS,” starring Bill Moseley.