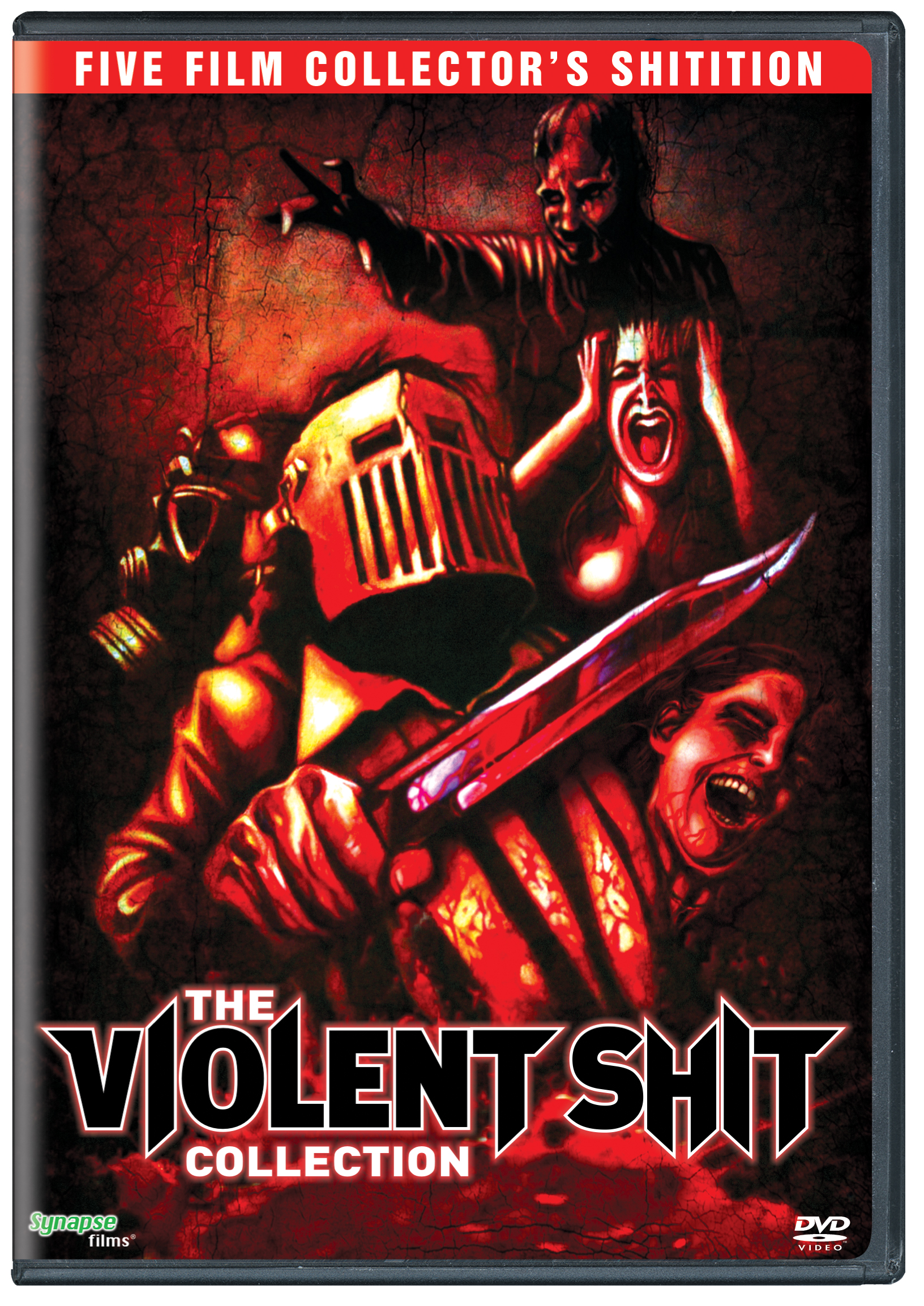 SYNAPSE FILMS GETS ITS SHIT TOGETHER WHEN “THE VIOLENT SHIT COLLECTION” COMES TO DVD IN A THREE DVD/FIVE-FILM SPECIAL “SHITITION” THIS APRIL!

A legendary and notorious staple of the underground tape-trading scene of the 1990s, Andreas Schnaas’ VIOLENT SHIT trilogy were landmarks of the early shot-on-video horror boom that would go on to have a profound impact on extreme genre filmmakers the world over.

Proving that you could bring new excesses to genre cinema, these films represented a new high in lowbrow entertainment whose impact can still be felt today on Synapse Films’ remastered DVD box set just ripe for rediscovery for a new generation of fans!

In 1980s Germany, horror film censorship was a huge problem. The government rarely let classic horror films pass without severe cuts when they were released on home video. To combat this unfortunate situation, many German horror fans scraped together a few bucks, rented video cameras and created their own ultra-violent, gory, splatter film epics. Arguably the most famous of these micro-budget German gorefests are the VIOLENT SHIT films from director Andreas Schnaas. Shot on standard definition video cameras, these films are a sight to behold. Although they are amateurishly made, choppily edited and loaded with ridiculous low-budget gore, these films have an undeniably offensive charm that has kept horror fans entertained for over 25 years!

VIOLENT SHIT
The legend of “K. the Butcher Shitter” is born in this German DIY video roughie, shot on the low-fi Video-8 format. A demented killer escapes the police and leaves a trail of blood and gore in his wake. Newly re-mastered by the film’s original producer.

VIOLENT SHIT II: MOTHER HOLD MY HAND
Set twenty years after the original film, Karl the Butcher Jr. continues his late father’s legacy. After receiving a machete as a birthday gift from his mother, Karl Jr. turns into a maniacal killer slashing, chopping, shooting and disemboweling his way through the German countryside. Newly re-mastered by the film’s original producer.

VIOLENT SHIT III: INFANTRY OF DOOM (aka ZOMBIE DOOM)
A group of friends get lost at sea and land on a remote island, but they are not alone! Captured by Karl the Butcher Jr. and his father, these men are subjected to a sadistic version of “The Most Dangerous Game” brought on by the Butcher Shitters and their army of metal-masked killers! Newly re-mastered by the film’s original producer.

VIOLENT SHIT 4.0: KARL THE BUTCHER VS. AXE
The year is 2023, and the world has become a desolate wasteland with gangs taking over the streets. Karl the Butcher Jr. returns from the bowels of Hell, on a mission to kill a new mass murderer named Axe.  Original English Language Version.

BONUS FEATURE: ZOMBIE ’90: EXTREME PESTILENCE
Shot for a reported $2000 between the filming of VIOLENT SHIT 1 & 2, ZOMBIE ’90: EXTREME PESTILENCE follows two bumbling doctors as they investigate a zombie outbreak. After a military plane crash releases strange chemicals into the German countryside, the dead rise to attack the living! Can they be stopped? Transferred from an original PAL 1” master given to us by Cinematographer Steve Aquilina.

SPECIAL FEATURES INCLUDE:
–    The first three VIOLENT SHIT films, remastered by the original owners, plus VIOLENT SHIT 4.0: KARL THE BUTCHER VS. AXE
–    Liner notes from Ted Geoghegan (Screenwriter of NIKOS THE IMPALER, and Writer/Director of WE ARE STILL HERE)
–    A Special BONUS DVD, including the English dub version of ZOMBIE ’90: EXTREME PESTILENCE, and VIOLENT SHIT 4.0: KARL THE BUTCHER VS. AXE Trailers, Behind-the-Scenes Footage, and Premiere Footage

THE VIOLENT SHIT COLLECTION is now available in a complete 3 DVD set collecting all the films and bonus items!