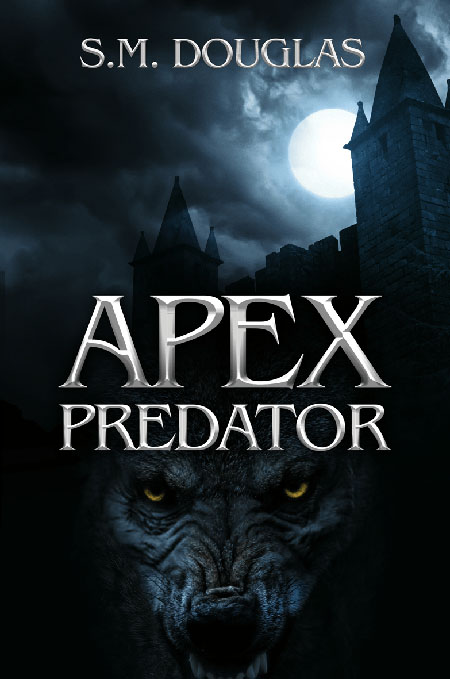 A barrage of macabre suicides involving high finance bankers has even national security perplexed. While agent William Brody races against the clock to bring the immoral to justice he soon realizes the global ramifications and the unholy lineage in his investigation.

Apex Predator will mark the first reading odyssey taken with one S.M. Douglas at the helm. It takes mere paragraphs to become addicted to his unique style and infectious story telling prowess. Its pace is swift and a tremendous amount of content is covered for a moderately modest level of two hundred fifty plus pages. This novel is the type of rare commodity for one to stumble across and devour its contents from cover to cover easily within a day.

Douglas kicks off the story in the late sixties and we unravel the exposition of Jim Donnelly. His plight is depicted in the here and now as opposed to indulging in a great deal of distracting back story. The past presents as much relative nature as the present and we’re compelled to discover just how. The author manages to keep his reading audience engaged by telling two stories simultaneously. We flash forward into summer of 2016 and occasionally he guides us back and forth. The sporadic shift back and forth keeps the intrigue level up and most readers will ravage the lapsed time to discover how the two tales intertwine.

The chapters are composed in brief, tight and compact fashion. One can only speculate the design was most certainly deliberate. A great deal of readers will find the prompt of reciting, ‘just one more chapter’ until the very mesmerizing conclusion.

Each scene is drafted with vivid description orchestrating a virtual film reel within the constant readers’ head. The action is ignited initially with intrigue while a prominent stir in rising plot escalation is undisputed. Douglas is cerebral in segue strategy and the payoff results in pulse pounding action. Much of the setup is borderline poetic and the crystal clear imagery inspires the suspense fanatic in each of us.

The dialogue between characters reigns true. We question not the authenticity of the interaction and rapport among the protagonists. The author harnesses contemporary slang and typical speech without compromising the integrity of a dated time frame such as the early seventies. As a result the characters seem more realistic while strengthening the plausibility principle in the audiences’ imagination.

Never fear terror aficionados, while contemplating just where in the grander scheme of things is the horror within? When the timing is just right and the blood begins to flow, the scenes surrounding all the mayhem and demise is depicted with eloquent grisly, gory and gruesome prose. Douglas evokes an unsettling level of skin crawling hysteria for even the most cynical of readers. A particular passage that consumes dread, “…all dignity, breeding and upper-class bearing gone in a miasma of bowel shaking terror.”

Easily one of Apex Predator’s highlights is witnessing the steady decent into oblivion for lead antagonist Jim Donnelly. As his character slips deeper into the void while embodying all that is evil, one cannot help but squirm with unease and maybe double and triple check that the locks have been secured for the night. Donnelly is devoid of all sentiment and his decline is creepy as hell as author Douglas unveils fraying each nerve of sanity along the way.
There’s no question one of the greatest attributes of Apex Predator is the manner in which each of the subplots interweave with one another. On a global scale the potential for finality is catastrophic. Rest assured Apex Predator is not your Uncle Ned’s Werewolf story. It’s invigorating, innovative and refreshing to see an age old premise composed with a brand new edge. I for one will jump at the chance to embark upon another S.M. Douglas odyssey.