“The only ‘ism’ Hollywood believes in is plagiarism.”- Dorothy Parker

2016 has ended with the usual chorus of journalists endlessly recapping the year’s major and minor events. But they overlooked one Hollywood story that’s subject should have been near and dear to any writer’s heart—plagiarism. It all started in 2012 when French filmmaker Luc Besson co-wrote and took sole story credit for the science fiction adventure Lockout. It’s the tale of a felon named Snow who’s unwillingly assigned a mission to rescue the president’s kidnapped daughter who’s being held hostage in an outer space prison. If Snow accomplishes this suicide mission he’ll be exonerated for his crimes. Critics quickly pegged Lockout as a half-baked rehash of John Carpenter’s awesome 1981 film Escape From New York, with a few hors d’oeuvres plucked from his not as awesome sequel Escape From LA. 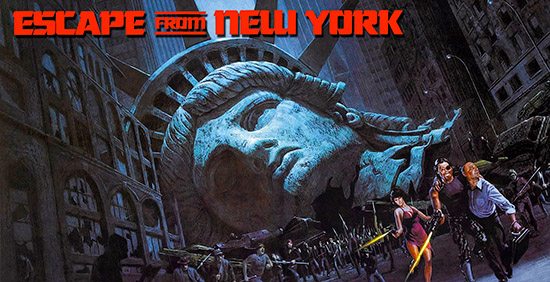 John Carpenter agreed and in 2015 filed a plagiarism suit against Besson. A Paris court found in favor of Carpenter, but only awarded him $95,000 in damages. Carpenter gentlemanly accepted the modest sum, gratified that his work had been acknowledged, but Besson indignantly appealed the decision. Besson’s appeal dragged on until July of 2016 when the court once again sided with Carpenter, jacking up Besson’s payout to a whopping $500,000. The moral of the story—sometimes it’s smarter to keep your plagiarizing crepe hole shut and just write a check.

I hope John Carpenter celebrated his victory with some shiny new Roland synthesizers, and in his honor I thought I’d share some other tales of cinema’s more memorable creative hijackings. I’ll skip cinephile favorites like Fistful of Dollars being an un-credited remake of Kurosawa’s Yojimbo or Reservoir Dogs being a near Xerox of Ringo Lam’s City On Fire, or The Terminator being a Harlan Ellison’s greatest hits package—those are too easy. By the way, Kurosawa and Ellison both got paid, whereas Lam proved that guys named Ringo always get the short end of the drumstick. Here we go. 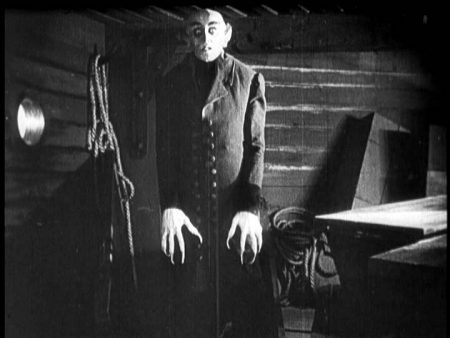 NOSFERATU (1922) – Putting Nosferatu on this list will earn plenty of hate mail from horror aficionados—but it’s true. Granted, Nosferatu is a genuine classic that virtually invented the vampire genre, but the cinematic visionary who produced it was a real Charakterlump … that’s German for scoundrel. In 1921, Nosferatu’s producer Albin Grau approached Bram Stoker’s widow Florence Anne Lemon Stoker to buy the film rights to Dracula. Bear in mind the novel was only 25 years old and at the time the financially strapped widow was negotiating the rights for a stage adaptation. Not wanting to taint the literary property with something as vulgar as motion pictures, she declined.

Rather than give up gracefully, Albin simply changed the characters’ names (Dracula became Orlok) and shot the film anyway. In alternate versions of this story Albin Grau never even bothered to ask for Stoker’s permission. Either way, Florence Stoker caught wind of Nosferatu and immediately sued for copyright violation. It didn’t help the producer’s case that some confiscated prints called Count Orlok Dracula in their intertitles or that the film’s premiere program booklet stated “Freely adapted from Bram Stoker’s Dracula.” Talk about a smoking gun! In 1925, after a legal battle, the courts made an example of Nosferatu by ordering all prints destroyed. It appeared Nosferatu would become another lost footnote in cinema history. 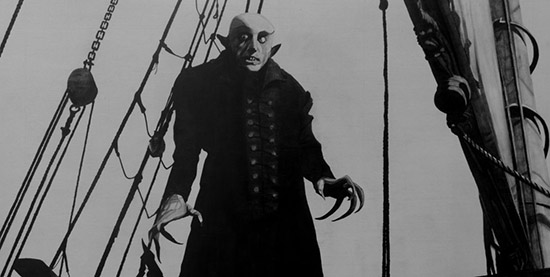 Just to clear the historical air, Florence Stoker was not some terrible, vindictive woman who hated films. The producers of Nosferatu had brazenly defied court injunctions by continuing to exhibit the film to packed houses in Germany. Then they declared bankruptcy in order to avoid paying Stoker’s estate while still exhibiting the film. Her demand that Nosferatu be destroyed was the only action that could prevent Albin Grau from continuing to steal her husband’s work. I’m just setting the record straight.

Miraculously, Nosferatu was saved from oblivion because Bram Stoker’s original attorney made a copyright filing error in the novel’s American paperwork, rendering Dracula public domain in the United States. Around 1929, a few (possibly pirated) prints of Nosferatu made their way to the USA and were therefore exempt from the court ordered destruction. Ironically, it had taken a fleet of expert lawyers to destroy cinema’s first vampire but it only took a single incompetent one to resurrect him. Nosferatu was popular with American audiences for a few months until talking pictures exploded on the scene. Those surviving prints of Nosferatu moldered in an American film vault for decades until they were rediscovered. Every VHS, DVD, 4K restoration and Goth band T-shirt out there owes its existence to those precious smuggled prints.

Sadly that same American copyright error meant Florence Stoker wasn’t fully compensated for the 1927 Broadway production of Dracula. That hit production made an unknown actor named Bela Lugosi into the toast of Broadway.

JACK THE GIANT KILLER (1962) – By 1959, special effects maestro Ray Harryhausen and his producing partner Charles Schneer were tired of creating low budget films like Twenty Million Miles to Earth for Columbia Pictures. In a bid for Hollywood’s brass ring, Harryhausen approached United Artists executive Edward Small with a script and concept art inspired by the legend of Sinbad the Sailor. But the script underwhelmed Small and he was also wary of its hefty budget so he showed Harryhausen the door. Disappointed, Harryhausen and Schneer went back to their old bosses at Columbia, settled for a lower budget and got a green light. The Seventh Voyage of Sinbad became one of the year’s top grossing films. Like Star Wars fifteen years later, it enthralled children and made adults feel like kids again. The only grownup that wasn’t thrilled was Edward Small. 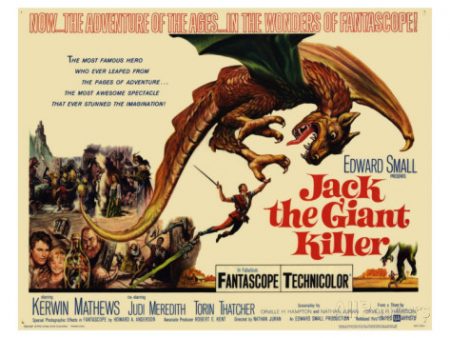 Looking like a Grade-A chump for passing on Sinbad, Small decided to ride its coattails by producing United Artists’ suspiciously similar Jack the Giant Killer. He hired young special effects artists and made sure their mythical monsters looked … familiar. To further the flames of plagiarism he cast Sinbad’s two lead actors, Kerwin Matthews and Torin Thatcher, in essentially the same roles and even hired Sinbad’s director Nathan Juran. 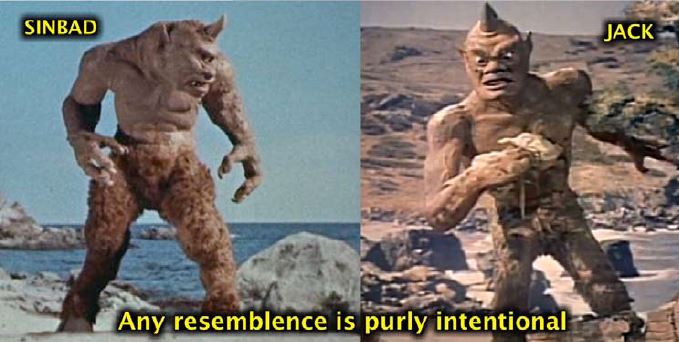 The notoriously litigious Columbia Pictures slapped United Artists with a plagiarism suit. Unfortunately, they took too long to officially file the paperwork, allowing Jack the Giant Killer to creep into theatres. But after being dazzled by The Seventh Voyage of Sinbad audiences didn’t flock to a wannabe packed with second-rate special effects. The details of Columbia’s lawsuit aren’t public, but suffice to say Jack the Giant Killer was quietly pulled from theatres and consigned to United Artists’ film vault. It rarely, if ever, popped up in television syndication, proving that Columbia’s lawsuit had some fangs.

But there’s a bizarre ending to this saga. Around 1976, United Artists re-released Jack the Giant Killer, except this time it was titled Jack the Giant Killer- The Musical. In an effort to dodge Columbia’s legal department, the film was poorly redubbed with songs, written by none other than … Edward Small! Apparently the ruse worked, or else Columbia just didn’t care anymore. Sadly for Mister Small, audiences didn’t care either. 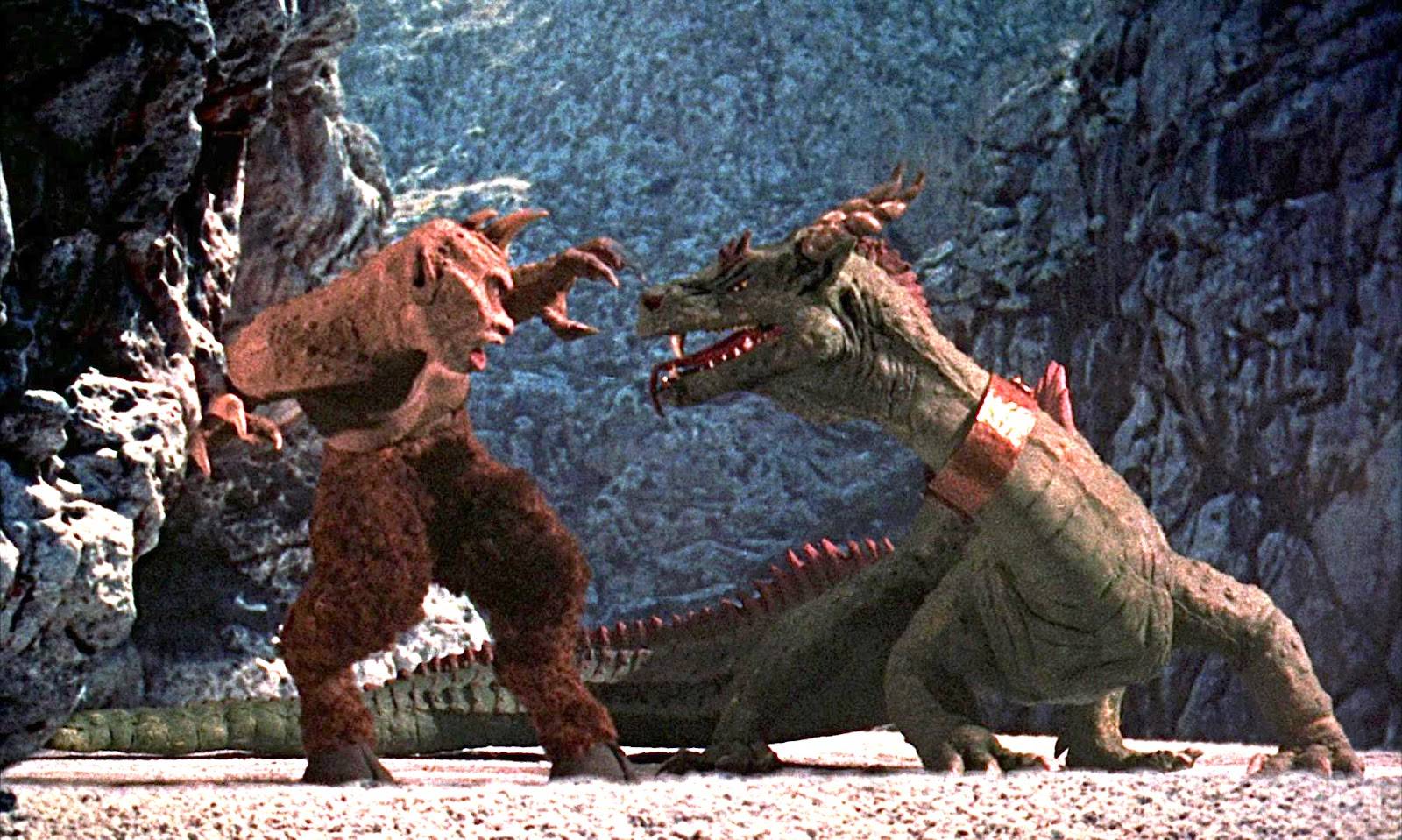 After Jack the Giant Killer Edward Small’s producing career faltered, mostly limited to forgettable Bob Hope, Phyllis Diller vehicles like Boy Did I Get a Wrong Number. His songwriting career never took off either.