ALIEN (1979) – Genre buffs are probably aware that this classic shares its concept with Edward Cahn’s 1958 monster on a space ship funfest It! The Terror From Beyond Space. But that similarity could be chalked up to its core idea being a science fiction trope rather than plagiarism. But viewers weaned on late night television also noticed that Alien’s derelict space ship full of giant skeletons was lifted from Mario Bava’s chilling Planet of the Vampires (1965), but let’s call that an un-credited homage. Since nobody took any legal actions for this pair of coincidences we’re officially giving Alien two Mulligans.

But things got ugly when science fiction writer A. E. Van Vogt sued 20th Century Fox, claiming Alien was lifted from his 1950 science fiction novel Voyage of the Space Beagle. Fox shrugged it off as another in the parade of nuisance lawsuits that often plague successful films—until someone actually read Van Vogt’s book.

In the novel’s first section, entitled Black Destroyer, the Starship Beagle lands on a desolate planet where a vicious life form slips aboard and starts killing the crew. Eventually they trick the creature into a stellar lifeboat and eject it into space. Sounds kind of similar to Alien, but, like It! The Terror From Beyond Space, it could be a coincidence. But in the third section, Discord in Scarlet, the crew finds another creature adrift in a derelict alien spacecraft. They take it aboard and things go to hell fast. The creature, known as the Ixtl, is not only hostile but reproduces by laying its eggs inside a living human’s stomach, and eventually the hatchlings chew their way out. The Beagle crew survives by tricking the creature into an airlock and shooting it back into space. Does any of that sound familiar? 20th Century Fox thought so and quickly settled out of court for $50,000, which was real money back in 1979. 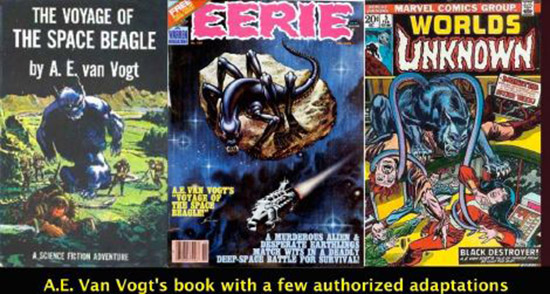 I don’t think that Alien screenwriter Dan O’Bannon intentionally stole his ideas. He grew up in the pre-home video era when science fiction movies were glimpsed once on television at 3:00AM before slipping into memory and books were swapped between fans and borrowed from libraries. O’Bannon may have been unconsciously influenced by these works and honestly forgotten where they sprang from. But the next guys on this list have no excuse!

THE ISLAND (2005) – This was a big budget DreamWorks production directed by that Lex Luthor of modern cinema—Michael Bay. It’s the tale of young people who spend their entire lives in isolation, unaware that they’re really clones of America’s wealthy and powerful, existing only to be harvested for their organs. The Island has a more nuanced plot than we’d expect from Mr. Bay, but maybe that’s because it was hijacked lock, stock and barrel from the low budget 1979 film Parts: The Clonus Horror, a film that had been screened for DreamWorks honcho Jeffrey Katzenberg while he was an executive at Paramount. 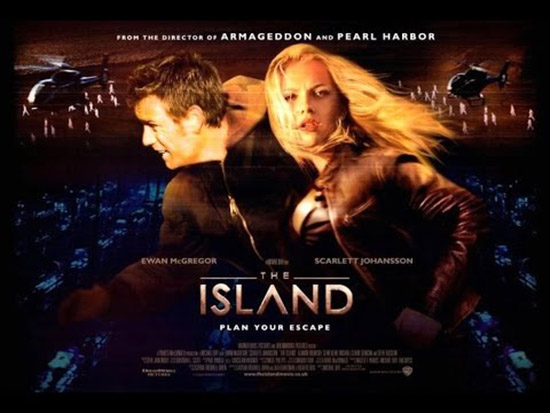 After hearing rumors about the similarities, Clonus director Robert Fiveson visited his local multiplex and sat dumbfounded. If you’re assuming the two films had a few ideas in common, guess again. Eventually, Fiveson and his business partner listed over a hundred instances where The Island cloned their little indie film. When a judge declared that Fiveson’s case had enough merit to go to trial, DreamWorks quickly opted to settle out of court for an undisclosed seven figures. 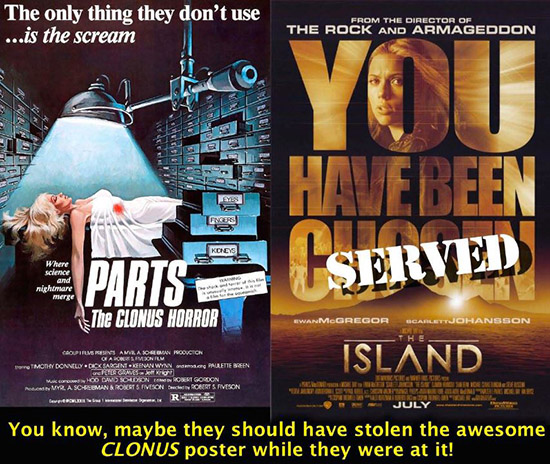 There are two tidbits of poetic justice. In 1999, Parts: The Clonus Horror was mercilessly lampooned on Mystery Science Theater 3000—not a fun experience for any filmmaker. But Fiveson might never have gotten his legal settlement if MST3K fans hadn’t created such an online uproar about The Island’s similarities to his little film. Secondly, The Island was a box office bomb, which serves Michael Bay and DreamWorks right for stealing from a little guy and for taking an intelligent concept and dumbing it down to a car crash and explosion debacle.

I haven’t forgotten about those reigning kings of copycat filmmaking The Asylum—the guys who coined the term “Mockbusters” to describe their own product line. To be honest, The Asylum’s already gotten enough media attention, plus I find their output kind of soulless and uninteresting although I do like Z-Nation, and enjoyed their Abe Lincoln zombie movie. But back in the 1970s, long before The Asylum existed, there was Edward Montoro—a genuine scoundrel whose biography is a cautionary tale packed with sharks, bears, grand larceny, crashing helicopters and fugitives on the lam. Montoro wasn’t as prolific as The Asylum but he certainly had enough panache to earn the honorific, Montoro, King Of Plagiarists- Emeritus.

His saga begins with a non-Montoro film—1974’s Abby. The Exorcist had been such a blockbuster that schlock artists were racing to hitch a ride on the devil’s bandwagon. Enter William Girdler, Louisville Kentucky’s best (and at the time only) film director. Being a resourceful guy, Girdler combined two hot button genres—demonic possession and Blaxslpoitation. The result was Abby, shot under the working title (get ready) The Blaxorcist and substituting William (Blacula) Marshall for Max Von Sydow. Drive-in audiences flocked to Abby and in a mere month it grossed close to four million dollars; that is until Warner Brothers successfully sued for copyright infringement. Abby was yanked from theaters and Warner Brothers allegedly confiscated all existing 35MM prints. Over the years Abby has popped up a few times on DVD but the transfer is from a battered 16MM print. Hard luck producer/director William Girdler never saw a dime from Abby.

You’d think Abby’s demise would have put the fear of God into filmmakers, but a few months later Edward Montoro’s Atlanta based Film Ventures International released Beyond the Door in the USA. This 1975 Italian clone of Warner Brothers’ The Exorcist racked up fifteen million dollars at the box office. Warner wasn’t amused, particularly because they were developing Exorcist II: The Heretic. They sued Montoro, confident that they’d crush this upstart just as they had with Abby. Montoro fought the lawsuit in court and amazingly he won, allowing him to pump Beyond the Door’s ungodly profits into his next film. Along the way he met Abby’s director William Girdler. The two southern boys bonded over their legal travails with Warner Brothers and decided to team up. That same year Girdler directed Montoro’s first in-house production Grizzly—a landlocked rip off of Universal’s blockbuster Jaws. 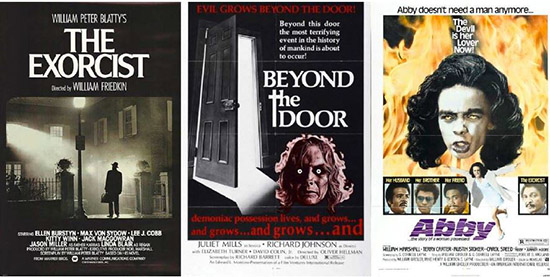 Grizzly tore up the box office, earning forty million dollars—corrected for inflation that would be a staggering hundred and sixty million dollars today. How did Montoro get away with blatantly counterfeiting Jaws? Well, the copyright gods must have been smiling down on him because at the time Universal Pictures was embroiled in its own lawsuit over Battlestar Galactica’s resemblance to Star Wars. Fearing negative press they did nothing to stop Grizzly’s box office rampage. Girdler and Montoro quickly followed Grizzly with another, less derivative nature-runs-amok opus Day of the Animals, which was a modest success.

Girdler had lost his shirt on Abby, but he owned a piece of Grizzly, so it looked like he’d finally have his day in the sun. Unfortunately, Montoro celebrated their financial windfall by stealing every dime of Grizzly’s profits from Girdler and his partners. The filmmakers successfully sued Montoro for their share of the profits. But in 1978 Girdler tragically died in a helicopter crash while scouting locations for a new film and never saw a penny of it, thus ensuring his place in history as the unluckiest guy in showbiz.

Montoro could have walked away fat and happy, but like a degenerate gambler he didn’t know when to quit. Montoro scoured the international market for easy money and found director Enzo Castellari’s (Inglorious Bastards) 1980 Italian film L’Ultimo Squalo (The Great Shark). Castellari’s film ripped off Jaws in true Italian fashion, right down to casting Vic Morrow in Robert Shaw’s shark hunter role, complete with the Irish brogue. The Italian filmmakers were a savvy bunch who knew they could get away with this as long as they confined the movie to the European market. But, thinking he was bulletproof, Montoro snapped up the American rights. He re-titled the film Great White and sank a then unheard of four million dollars into advertising. Everyone in America saw his TV ads for Great White … including the executives at Universal Pictures. 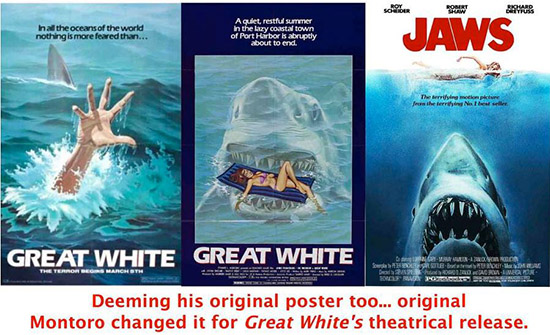 Great White opened big, and was well on its way to being another Montoro blockbuster. But having won their Battlestar Galactica lawsuit, Universal was not about to let this Georgia peach make a monkey out of them again. Their legal sharks attacked, forcing Great White out of theatres after its first month and hauling Montoro into court to squeeze him dry. Montoro’s millions in promotional money were squandered and angry theatre owners weren’t booking any other films he tried to exhibit. He was also in the midst of a costly divorce. The unpleasantness dragged on until 1984 when Montoro released what he was sure would be his saving grace—the surprisingly original zombie film Mutant. It bombed.

Facing financial ruin on multiple fronts, Montoro followed the lead of a million deadbeat dads by going out for a pack of cigarettes and never coming back. His business partners discovered he’d withdrawn over a million in cash from the company before pulling a DB Cooper. It’s believed that Edward Montoro slipped off to Mexico and was never seen or heard from again. I’d like to think he became a shark fisherman in Cancun who stole other fishermen’s catches. 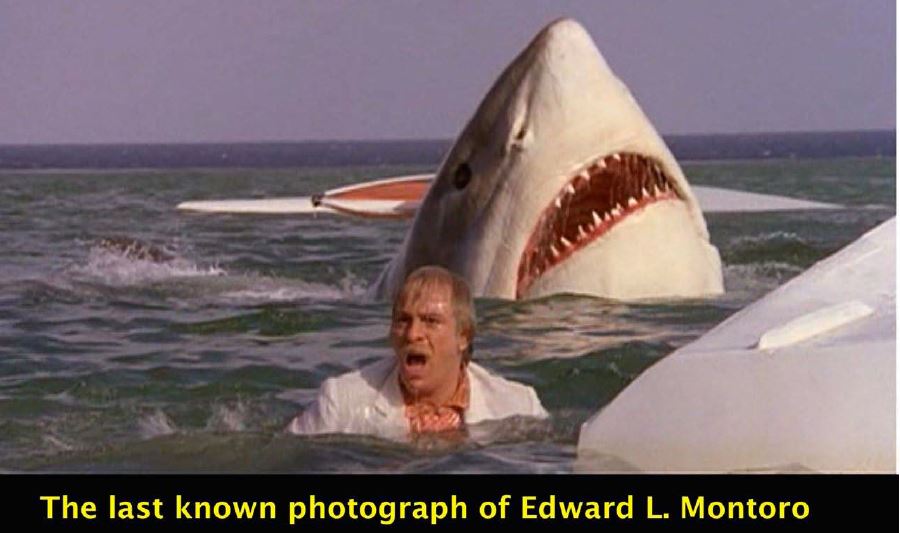 Sadly, those are just a few examples of Hollywood’s intellectual property heists. Mark Twain once said, “All ideas are second hand, consciously and unconsciously drawn from a million sources.” There’s some truth in that observation; then again, Mark Twain never sat through Great White.

I’d be pulling a “Montoro” if I didn’t acknowledge Jeremy Smith’s in depth piece Great White, the Great Jaws Rip off, which helped me filter through all the rumors surrounding Edward Montoro.