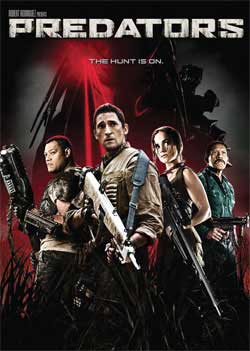 Chosen for their ability to kill without conscience, a group of killers, some trained and some who are not, must endeavor the alien race of predators that have set out to target them as prey. Dropped into the vast jungle of a distant world, these human predators must learn just who, or what, they are up against, and that their ability, knowledge and wits are tested to the limits in the battle of survival of kill or be killed.

Ok kiddies, The Saint had a slow week (My ghastly family are off on a short vacation). Did I mention that I like slow weeks? No creepy kids or women to hassle The Saint while he’s musing in his private mausoleum. So I took in a few movies, one of them being “Predators”. The Robert Rodriguez produced sequel to “Predator 2”. I’m not counting “Alien Vs. Predator 1 or 2 as I think they veer from both of the original franchises goals.

Director Nimrod(!) Antel’s “Predators” stars Adrien (Schnoz) Brody as a Black ops soldier who finds himself free falling thru the sky as the movie opens. He has no recollection of how he got into this situation but he is wearing a parachute & manages to land safely on the ground. Where is he? He sure as hell doesn’t know & neither do the other 7 people who have either already landed or land after Brody does. In the end their are 8 of them: Edwin (Topher Grace), Isabelle (Alice Braga), Stans (Walter Goggins), Nikolai (Oleg Taktarov), Cuchillo (Danny Trejo), Hanzo (Louis O. Changchien) & Mombasa (Mahershalalhashbaz Ali). Whew! Wait a sec…The Saint needs a break from typing that dudes last name…Ok. I feel better now. Why couldn’t this dude’s name be just M?

All of them are specialists in war a/o murder save for Topher Grace’s character who claims he’s just a doctor. None of them know where they are but it is a jungle & Isabelle seems to think she knows where they might be but they have to look around. Brody’s character tackles command just because. I guess they defer leadership to him cuz’ of that nose. The tension up to now is nearly nil. All the audience has are 8 armed (7 actually, Topher’s a doc) individuals looking for answers as to why they are here & who is responsible. As they investigate they stumble upon what looks like a spacecraft crashed in their midst with a corpse in it covered by bugs but definitely not a human one…

As they continue to figure out where they are, they follow Brody to higher ground & realize that they’re definitely not on Earth as the sky seems littered with planets whole & Crumbling in pieces. At that point they are attacked by what Brody calls “Dogs” but The Saint never seen no “Dogs” that looked like this. Covered in bony spikes with long tails & fangs aplenty these creatures attack the group but they manage to kill them off until one suddenly stops attacking & turns & runs away at the sound of a whistle. Well trained these beasties be! At this point in the film the director knows he’s gotta start showing off the Predators handiwork so we find our group stumbling upon an area where there are the pre-requisite skinned bodies & stacks of skulls & then they realize that they are prey for the hunter. But who is that hunter? We know but they don’t…yet.

Now up to this point although I wasn’t particularly sitting on the edge of my seat, I was intrigued by who was gonna be the first to die. I mean, that’s basically the point of the story at this point isn’t it? I, of course cannot reveal who that poor unfortunate is or in what order they start to die. Gotta keep some surprises for you to find out for yourself you know. But after a few of them die they see who is hunting them down. In actuality they find a Predator hanging from a tree unconscious but alive once they poke him & he is pissed! They also find out that they have been being followed by something else, another human! Laurence Fishburne plays Noland, someone who has survived the hunt for “10 – 15” seasons. How? He never really tells how he did it. Although he has been able to follow them by wearing a Predator helmet he co-opted from one that he’d killed in the past. It cloaks them from being seen. But we know that already from the previous “Predator” films. This is the biggest problem with the script from Alex Litvak & Michael Finch. They add nothing new to the predators arsenals, looks, or even their general demeanor. I know there are those of you who are purists & want the Predators to stay as they always have been & that’s fine but this being the 5th film featuring Predators I think a little variation would’ve been pretty cool. It would at the very least be something different. But we get the same ole’ Predators that Schwartzenegger dealt with way back in the 80’s. As a matter of fact, Braga’s character tells of the rumor of these creatures when they first landed on Earth & of the one man who survived this encounter with them…

There are only 3 of the Predators hunting our party down (4 if you count the one who’s tied up). And one by one they pick off our protagonists. Although one of them seems to be something of a “Senior” Predator. His face is far more vicious looking & he is the one responsible for the tied up one. Why is he tied up? I have no idea. If it was mentioned I sure missed it. But I don’t fall asleep at the movies (“Ponyo” doesn’t count! My little creep wanted to see it. Not me). So that is one big ass plot hole for this movie. I also neglected to mention that Fishburne’s character is a bit loony after surviving for so long & has an imaginary friend he argues with constantly. It’s a little bit of humor that is sorely lacking from the movie & he plays it off well.

Of course I don’t think it’s a spoiler to say that the last 3 standing are Brody, Braga & Grace. You guys know their the biggest names in the cast save for Fishburne & I won’t mention what happens to him. Brody conveniently finds a starship that they can escape from the planet with although how he’s going to fly it I have no idea. He also realizes that the Tied up Predator wants to be cut loose & get his revenge on the “Boss” Predator. Again, the script makes no mention of why he’s tied up & what beef he has with the head honcho Predator. This is a major fallacy in the script & rather than try to suss it out a bit the screenwriters just let it lay as it is. This is demeaning to the audiences intelligence if you ask me…as a matter of fact it’s demeaning to me..The Black Saint!! I will have to pay these 2 clowns a visit one day.

In the meantime, Grace’s character steps into a sort of bear trap & is hobbled by it & he needs help to walk. Braga will not leave without him but Brody’s character has no problem getting on the good foot & high-tailing it to the spaceship he can’t possibly fly so he leaves them to their fate. At this point we find out that Topher isn’t all he seems to be & I can’t say more than that. NO SPOILERS!! But he falls into a pit with Braga & neither one of them can get out of it. I might add that at this point Grace seems to have no problem walking around on his mangled ankle. As Brody is approaching the ship the 2 Predators start to battle each other. This was the best part of the movie for me. Some good hand to hand action between 2 Predators who clearly have no use for each other. The good news is they kill each other. The bad news is the “Boss” Predator detonates the ship before Brody can get to it. So he’s stuck on the planet with Braga, Grace & whatever else is running around the f*cking set.

Ultimately we are left with Brody & Braga’s characters walking away from the pit while they see more parachutes hurtling towards the ground…More prey to be hunted by the Predators. What happened to Topher? Fuck off & see the movie yourself if you want to find out. Brody’s last line pretty much spells out that they’re thinking sequel but I doubt it. It’s a stupid ending to what is basically an exercise in lazy filmmaking.

So what’s good about this bitch? The acting is excellent for what little the script provides the actors. Special mention should go to Fishburne’s Noland. He plays the role of a nut pretty f*cking well & he is an intimidating presence. When he is asked how many Predators he has killed he replies “2, maybe 3” & then gets into an argument with himself about it. But you BELIEVE that he has killed more than a few of them & that’s what counts. I was even able to manage not staring at Brody’s nose too much this time around. I don’t know why though. As I’ve mentioned in the past Brody’s nose is a special effect all unto itself so if I didn’t notice it too much he must’ve been really acting his ass off….

Now all that remains is the question: Do I recommend you see this movie? If you are a fan of the whole “Predator” mythos then definitely see it but don’t get too excited over it. If you’re not a fan of the ugly f*cks then stay far away from this one. You’ll hate it. Myself? I give it 2 out of 5 shrouds. I won’t be purchasing it on Blu-Ray when it’s released. It isn’t even very gory when it could’ve been a gore fest. That’s very disappointing to the Saint. I likes my movies blood soaked, you all know that.

I guess I’ll crawl back into my little dark corner of the Mausoleum now & wait for something worthy of my time at the local bijou. In the interim please remember to respect your parents, eat all of your vegetables & of course before you go to bed say your prayers…TO ME!!