The poster and trailer for Yoshihiro Nishimura’s KODOKU: MEATBALL MACHINE! 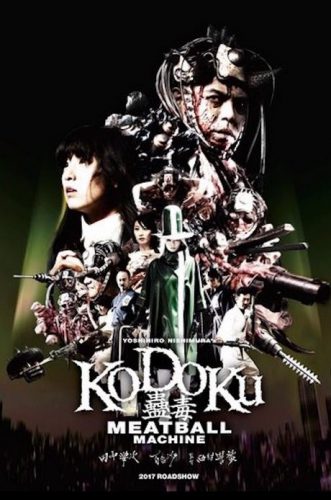 Nishi-Eizo, the Tokyo-based film production and special effects company from Yoshihiro Nishimura, is proud to reveal the poster and trailer for the upcoming gorefest KODOKU: MEATBALL MACHINE, which Nishi-Eizo has produced alongside King Records and Ark Entertainment Inc. The insane, hyperviolent new feature film was written, directed, edited, and had all of its special effects created by the legendary Nishimura, whose previous credits include TOKYO GORE POLICE, HELLDRIVER, THE ABCs OF DEATH, and the recent festival favorite NINJA WAR OF TORAKAGE.

KODOKU: MEATBALL MACHINE is the splatter-filled sequel to Yudai Yamaguchi and Jun’ichi Yamamoto’s MEATBALL MACHINE, which Nishimura created the original special effects for back in 2005. The twisted story, which melds cyberpunk sci-fi, fantasy, extreme gore, and comedy, carries on in Nishimura’s latest blood-drenched riot, which will be released in 2017