It’s been too long since we talked about the UK’s longest-running horror magazine – The Dark Side. Let’s remedy that right now. Every time a new issue of The Dark Side hits the shelves it’s like a pinata of goodness has been smashed open, spilling its innards over delighted mouths. Editor Allan Bryce and his merry band of ne’er-do-wells know their audience very well, and they like to dangle ever tastier morsels at us. Here’s a look at three recent issues of the UK’s longest-running horror magazine.

Issue 176
Behind a gorgeous painted cover depicting a giant bug attack, issue 176 has a spectacular central feature covering the creature features of the 1950s, written by the wonderful Denis Meikle and sumptuously illustrated with film images, posters, lobby cards and more. It’s a joyous thing which evokes an iconic era for those who were there and those of us who had to discover it retrospectively.

There’s a beautifully lurid interview with Yoshihiro Nishimura (director of Helldriver, Mutant Girls Squad, Vampire Girl Vs Frankenstein Girl, Tokyo Gore Police and Meatball Machine), an interview with Lights Out director David F Sandberg and a piece on the 1931 version of Dr Jekyll and Mr Hyde.

As well as the usual news, letters and reviews, there’s the 2nd part of the X Certificate Memories feature and a classic interview with the late David Warbeck. It doesn’t get much better than this, until the next issue arrives!

Issue 177
The cover feature for issue 177 is a great look at the in-house gimmicks that producer/director William Castle brought to fright flicks of yesteryear, such as the ‘Ghost Viewer’ for 13 Ghosts, electric shocks through a chair during The Tingler, a poll to choose the ending of Mr Sardonicus, the ‘fright break’ during Homicidal and many more tongue-in-cheek antics which made the cinema experience of those flicks that bit more memorable. They really don’t make them like they used to!

Also on the menu for 177 is a look at classic Karloff movie posters, an interview with Sarah Keller covering her experience making The Beyond (and more), the communist fears in 1950s genre movies, a feature on Gorgo and much more besides.

The cover feature is the clear star of the show here and makes you yearn for a large-format book of posters and examples of the shenanigans Mr Castle was famed for. A delight.

Issue 178
After issue 177’s delights, issue 178 feels like a little bit of an anticlimax, but only very slightly. The cover feature interview with Jane Merrow on her time working with Christopher Lee and Peter Cushing is entertaining and affectionate, while a nostalgic look at the work of ray Harryhausen pretty much sums up what the magazine is all about in one piece.

An interview with Deep Red’s Daria Nicolodi and a Lon Chaney feature are also of a high standard. An examination the classic War of the Worlds adaptation’s production adds further depth to the nostalgia fest for fans of the classics, but may well turn fans of modern genre cinema off somewhat. There’s still an element of new cinema being covered in the reviews and suchlike, but it does feel that the magazine is delving deeper into the past rather than the future with each issue.

That’s working in their favour for now as the magazine’s growing readership does seem to favour the classic over the cutting edge. This feels very much like a magazine for a particular section of fandom, which is both its strength and its weakness sometimes.

Issue 179
The opening interview in The Dark Side 179 is with the wonderful Geretta Geretta of DEMONS fame, and she is disarmingly pleasant throughout it, sharing fun anecdotes about that legendary Bava/Argento package along with shooting RATS, MURDEROCK and more.

After the reassuringly lengthy letters pages comes the continuation of Denis Meikle’s ‘A Century of Horror’ series, this time covering The Picture of Dorian Gray and The Flying Dutchman, both from 1945. This is followed by Richard Holiss writing about two cult British sci-fi movies in the form of Fiend Without a Face and The Trollenberg Terror, which is fun even if you’re unfamiliar with the films themselves.

The magazine’s feature on the much-missed BBC’s 1970s double-bill nights of horror films is brilliant, but does feel a little like overkill when the rest of the nostalgia-heavy material is factored in. After the superb reviews section the magazine heads even further back to 1935 and The Black Room.

An interview with the lovely Madeline Smith (Hammer, James Bond etc) is fantastic, but again won’t interest fans of modern horror. A gory feature with JR Bookwalter (maker of low budget flicks like The Dead Next Door and Ozone) is engaging and thankfully different from the slew of other retro features.

Aside from the reviews, this issue doesn’t have a single feature on a new film, which may be what the readership is wanting, but it does seem to ignore a whole new generation. But hey, I’m an old-school fan so I love it. I just feel kinda bad that younger fans won’t share the same pleasure in it. 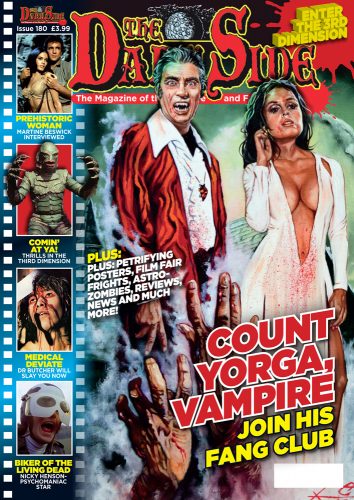 Issue 180
So by now The Dark Side is almost exclusively featuring nostalgia-fests, and it seems to be working out well for them as circulation of the magazine continues to grow. The audacity of putting something as tacky as Count Yorga, Vampire on the cover is a delight, and I lapped this issue up like all the others, even with the constant reminders that the horror cinema a lot of us grew up with is long gone, replaced by shaky-cam and lame music-cue scares.

A piece on the late Ted Mikels is fun and informative whilst trying to be diplomatic about his particular brand of moviemaking. An interview with the very lovely Martine Beswick takes in her famed roles as a prehistoric cave girl, while a relaxed interview with Nicky Henson on the re-release of Psychomania. An examination of 1950s 3D gimmick movies follows, and the reader is taken back to an age when 3D meant more than just obscene ticket prices.

My favourite feature in this latest issue is by editor Allan Bryce, covering the magazine’s outing to the 44th London Film Convention, which is a fun travelogue style piece which nicely captures the atmosphere of a UK convention.

The piece on Count Yorga’s Robert Quarry sheds light on a name not a huge number of film fans will be familiar with, while the Posters From The Edge section shows off some typically lurid film posters from Thailand. There are other delights to be found within, making for another splendid issue.

What I’d like to see is more material on films and trends in cult cinema from the 1980s and 1990s, as the content continues to focus heavily on the 1960s and 1970s. That said, The Dark Side remains a fantastic read.

Visit them online at www.thedarksidemagazine.com