WITH AN ALL-NEW Blu-ray™ January 3 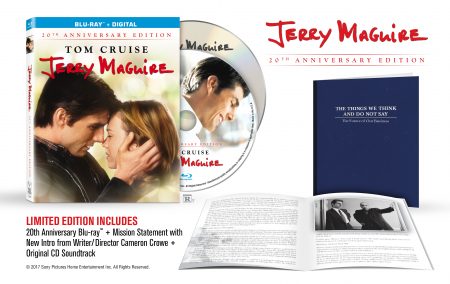 All-New Bonus Materials Include a Three-Part Retrospective and

CULVER CITY, Calif. (November 22, 2016) – Few films have had more memorable lines of dialogue enter the public lexicon than writer/director Cameron Crowe’s JERRY MAGUIRE. “Show me the money,” “Help me help you,” “You complete me” and “You had me at hello” have all helped establish the film as a modern pop culture classic. On January 3, Sony Pictures Home Entertainment (SPHE) celebrates the 20th Anniversary of the iconic fan favorite when JERRY MAGUIRE returns to Blu-ray in an all-new special anniversary edition.

This new edition presents the film fully remastered in 4K and presented in 1080p HD, and with all new bonus materials, including the three-part retrospective “Jerry Maguire: We Meet Again,” featuring a new interview with Tom Cruise and Cameron Crowe. Also included are nearly 60 minutes of never-before-seen deleted & extended scenes and a Photo Gallery featuring rare photos of the cast and crew.

The 20th anniversary Blu-ray will initially be available exclusively at Best Buy as a limited edition, which includes a booklet featuring an all-new written introduction from Cameron Crowe, Jerry Maguire’s original Mission Statement and the film’s original soundtrack CD.

Celebrate the 20th anniversary of the iconic modern classic that’s become an integral part of our pop-culture landscape. Tom Cruise stars as Jerry Maguire, a sports agent who’s enduring a crisis of conscience. After he suddenly and unceremoniously loses his job and his girlfriend (Kelly Preston), both his personal and professional careers hit an all-time low. But when a single mother (Renee Zellweger) enters his life and his heart, he finds himself negotiating the biggest deal of his life…for the heart and the hand of the woman that he loves.

JERRY MAGUIRE has a run time of approximately 139 minutes and is rated R for language and sexuality.