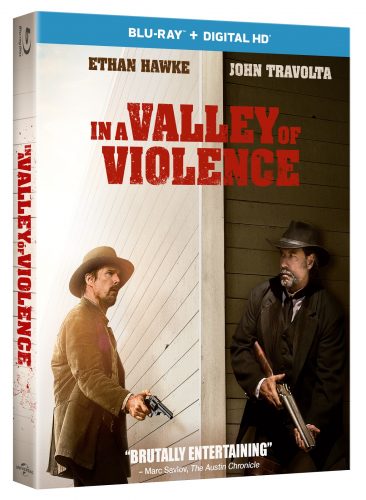 ON BLU-RAY™ AND DVD ON DECEMBER 27, 2016 FROM UNIVERSAL PICTURES HOME ENTERTAINMENT

Universal City, California, October 26, 2016 – A mysterious drifter enters a forgotten town in the edgy action film, In a Valley of Violence, available now on Digital HD and on Blu-ray™ and DVD on December 27, 2016 from Universal Pictures Home Entertainment. From acclaimed director, Ti West (The Sacrament, The Innkeepers), and famed producer Jason Blum (Insidious, The Visit), the film stars Academy Award® nominees; John Travolta (The People v. O.J. Simpson, Criminal Activities) and Ethan Hawke (Sinister 2, Maggie’s Plan). The In a Valley of Violence Blu-ray™ and DVD include bonus content that takes viewers on a wild ride behind the scenes with an exciting inside look at the making of the film.

Ethan Hawke stars as Paul, a lone drifter who wanders into the forgotten town of Denton, Texas – dubbed by locals as the “valley of violence”. There, he picks a fight with the wrong man, Gilly (James Ransone), the troublemaking son of the town’s unforgiving Marshal (John Travolta).  As tensions arise between Paul and Gilly, an inevitable act of violence starts a disastrous chain reaction that quickly drags the whole town into the bloody crosshairs of revenge.  Only the world-weary Marshal struggles to stop the violent hysteria, but after a gruesome discovery about Paul’s past…there’s no stopping the escalation.

The film will be available on Blu-ray™ and Digital HD with UltraViolet™ and DVD.

Tags IN A VALLEY OF VIOLENC