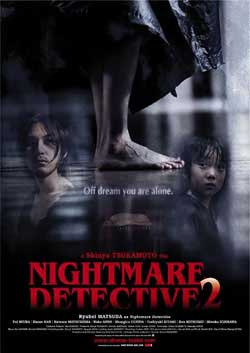 Yukie and two of her girlfriends are being haunted by the ghost of a classmate, they once heavily bullied. When the other two die under mysterious circumstances, Yukie sees only one chance for herself. With the help of the Nightmare Detective (Ryuhei Matsuda) she hopes to escape her hopeless situation.

I am surprised that they made another NIGHTMARE DETECTIVE movie and a bit more surprised that Shinya Tsukamoto was at the directors helm once again. He must really like this series and be behind it considering all he did in the making of this movie. I think he is a great director just take a look at his earlier films like TETSUO: IRON MAN, TOKYO FIST and HIRUKO THE GOBLIN. All three are very different but all three have his signature style and I really want/need to see the sequel to TETSUO: IRON MAN called TETSUO:BODY HAMMER and BULLET BALLET. Plus GEMINI and SNAKE OF JUNE are great as well. But I do not like these NIGHTMARE DETECTIVE movies and the title sounds like a playstation video game to me.

The idea that someone can enter another persons dreams just smacks of the 80’s flicks DREAMSCAPE and the iconic dreamslasher opus everyone knows and loves A NIGHTMARE ON ELMSTREET. But part 1 and 2 of NIGHTMARE DETECTIVE do not explore the possibilities that a movie with many dream sequences brings up. I actually blogged about some of my recent dreams on my myspace profile and in my opinion my dreams were much more interesting, gory, and scarier than NIGHTMARE DETECTIVE 2. NIGHTMARE DETECTIVE 2 has alot of the same problems part 1 did and the biggest one for me is that it just didn’t feel like a horror movie or even a supernatural thriller and I guess it is not supposed to be a all out horror film but it is closer to a supernatural thriller because it is most like your traditional tried, tested, true and truly tired ghost films ala THE GRUDGE, DARK WATER, and of course RINGU. Which is another thing that sucks because I would think that Shinya Tsukamoto could come up with something more interesting and original for a movie dealing with dreams and nightmares. I would have rather seen something dealing with monsters or someones bizarre dream world, something more like THE CELL.

Maybe the budget for NIGHTMARE DETECTIVE wasn’t big enough to allow for some really outlandish and bizarre dream scenes but that’s where the creativity of the film makers is supposed to come in. Part 1 also came off as a episode of the Japanese version of CSI or LAW AND ORDER:SVU and part 2 reminds me of the Japanese version of the Ghost whisperer or something. Not that I watch the Ghost Whisperer or that it is a bad show but NIGHTMARE DETECTIVE 2 seemed so by the numbers and pedestrian that it came off like a TV show. And there is no bloodletting and gore to really speak of.

Even though part 1 did have it’s gruesome moments I really didn’t expect any out of part 2 but I am a voracious gorehound and feel I must mention this. To be even more honest it was something of a chore to sit through part 2 after enduring part 1 and part 2 has nothing to do with part 1 other than the fact that it has the Nightmare Detective, Kyoichi Kagenuma, There are no police and the pretty Detective lady from part 1 is not in here either. In fact their are large chunks of the film where the Nightmare Detective is absent and the movie focuses on a girl named Yukie. Yukie is a Highschool girl and she and two friends played a mean prank on another girl naked Kikukawa and now Kikukawa is invading their dreams and Yukie searches out the Nightmare Detective for help. But the Nightmare Detective is not interested in helping other people with their problems.

He has enough problems of his own predominantly the memories of his mother and how when he was a kid she was scared of e everything and everyone including her own son. But things just get worse for Yukie and her friends when Kikukawa invades their dreams and kills one of Yukies friends. So yeah this is alot like A NIGHTMARE ON ELMSTREET but more like THE GRUDGE and RINGU.

But I do like the character of the Nightmare Detective. He’s a whiner and depressed and suicidal and I like all those characteristics but I do not like this movie and it pains me to write this because I think Tsukamoto is a damn good director. And to know that not only did he direct NIGHTMARE DETECTIVE 2 but also wrote, edited, and helped with the cinematography tells me that he really loves making movies and enjoys every aspect of the process. But I really hope he is done with the NIGHTMARE DETECTIVE series!

I keep saying how much I do not like NIGHTMARE DETECTIVE but there are plenty of striking images that I do like. When Yukie goes to check on her friend she finds that her family is having a wake for her. Yukie goes up to the coffin and lifts the lid and see her friends face which is hideous and witchlike. That was creepy! There is also some scenes of victims of a schoolbus accident and all the dead are walking down a street very zombie like and there is one lady I paused it on and she looked very wicked. I just wish they would of started attacking folks and eating flesh zombie style!

Then there is the very odd scene whenKyoichi is a little kid and he is wandering around the streets naked! Only to settle down between a old couple who is already asleep. This was weird and kind of uncalled for. But my favorite scene is where Yukie is confronting Kikukawa in a dream and Kikukawa grabs Yukie and the Nightmare Detective emerges from within Yukie and grabs Kikukawa! He comes out of Yukies chest and sheds her body like a skin suite and it looked really cool! It is one of the best uses of cgi I have seen in awhile. At first I thought he was just reaching out from inside a extra large t – shirt but I am pretty sure it is all computer generated. It was surprising and cool and looks exactly what you think it looks like. There are a few other scenes that are subtle but totally work and that is the skill of Shinya Tsukamoto as a film maker.

So even though I do not like NIGHTMARE DETECTIVE 1 or 2 I have read other reviews that like it so I may be totally off base and full of sh*t. If you like these types of ghost films, and I do too, you might want to give it a chance or if you like the first one. Maybe I need to watch it again and maybe I will but not anytime soon. 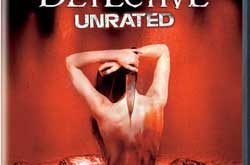