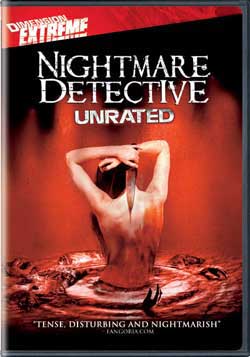 Three people in Tokyo take a surreal voyage of self-discovery through memory and nightmares. “O” intends suicide while talking on a cell-phone with a stranger he meets on line who plans a simultaneous suicide. Events take a horrifying turn. Keiko Kirishima is a cool, seemingly emotionless police detective, brilliant but off-putting. She’s faced with two mutilated corpses who appear to have killed themselves, but she’s not sure. A cell-phone number links the deaths. She calls on Akumu Tantei, a poor and suicidal young man who has the ability to enter people’s dreams. He’s reluctant to help. His past haunts him. A subconscious duel of terror and blood awaits the three.

Hold the phone! Or the dvd player or your remote or something ’cause I just found out NIGHTMARE DETECTIVE was written and directed by Shinya Tsukamoto! I have been a big fan of his since witnessing TETSUO: The Iron Man and then tracking down a bootleg copy of TOKYO FIST and then seeing A SNAKE OF JUNE and purchasing GEMINI. From first seeing TETSUO: The Iron Man I knew Tsukamoto was a powerful director and that his films were experimental avante gard slices of cinema and that Shinya Tsukamoto was destined for great things but this is the first movie of his that I did not like.

I recognized that Shinya was in NIGHTMARE DETECTIVE but I thought that he was doing a fellow director a favor as he plays the killer , a killer called O , and Shinya does a good job as he usually does when he stars in his own films. He’s almost as good of an actor as he is a director but I didn’t get that uneasy , paranoid , half crazed full on horror vibe that his films give off. I’m almost shocked actually that he made this mediocre film in my eyes , but there are very few directors that always make great films that never disappoint and for me NIGHTMARE DETECTIVE was a disappointment after finding out who directed it. But we must go on and forge ahead and I will not give up on Shinya Tsukamoto and will remain a fan , this is just a slight bump in the cinematic highway we travel together as fan and filmmaker.

And this is one of the first movies Mike of HorrorNews.net sent me that had ample amounts of gore and I can’t say I was totally into . Gore movies are my favorite and most of the movies I have reviewed for HorrorNews.net have been good but not gory so it’s ironic that the first movie they sent me that does have gore really didn’t do that much for me. Well , there are some scenes that made me cringe a bit but they come sporadically and I wouldn’t cal it a gorefest either.

The film starts with a middle aged man sitting at a table in a dim blueish tinged room and right away you see long hair hanging from the wall , hair just like in RINGU or THE GRUDGE and right away I was both kind of put off but also saw it as a joke towards all these long haired ghost movies. Then you see blue ghost like arms come out from under a blanket and you think it’s a ghost but it’s not. It’s the NIGHTMARE DETECTIVE.

Turns out the NIGHTMARE DETECTIVE is a emo looking young Japanese fellow with the ability to enter peoples dreams but that’s about all he can do. He doesn’t have any powers in these dreams and the first dream we see him in all he’s doing is trying to find out if the man has a will telling which of his family members will get his money. It really has nothing to do with the rest of the movie but it is our intro to the NIGHTMARE DETECTIVE.

The real story starts with a cute young Japanese girl standing on the sidewalk of a busy street talking to someone on her cell phone about how she wants to kill herself. She wants to do it with a pair of scissors and is telling the person on the other line about her impending suicide and how they could kill themselves together when she is attacked by an unseen and very loud force. It gives her a vicious gash on her leg which bleeds profusely and she runs home to her apartment but her invisible assailant keeps on attacking and proceeds to brutally slash her to bits. Turns out the girl was dreaming and actually stabbed herself to death.

So this is a bloody scene but I just wasn’t feeling it because then it turns into a police procedural film. Not that this is a bad thing because there are some great films that border the genre of horror that are police procedurals ; SEVEN comes to mind of course and then there’s RELENTLESS , SILENCE OF THE LAMBS , SAW , ZODIAC and a slew of others that I can’t think of right now. And I couldn’t get it if this was supposed to be a horror suspense thriller or a surreal excursion into David Lynch lands but it just felt like a rehash of Law And Order or CSI. There are some elements I did like. The NIGHTMARE DETECTIVE himself is a good character as he is a depressed and suicidal kind of guy and the relationship he has with Detective Kirishima. She wants him to help her find the killer but the NIGHTMARE DETECTIVE knows that she doesn’t give a damn about his safety when he enters a persons dream in search of the killer.

I like Detective Kirishima. She is very pretty and rides a bicycle a few times in the movie and looks damn cute doing it.
Back to the gore factor but it did not move me as much as I would of liked but when they are in the dream there is someone , some thing chasing Detective Kirishima and the NIGHTMARE DETECTIVE , whose name is Kagenuma , and it looks like a meat like skinless thing and it is pretty weird and gross and made the movie a little better but it doesn’t come out till the end and by that time I didn’t care all that much.

I guess this isn’t a horror movie in the traditional sense there really isn’t a atmosphere of horror and terror and I can’t believe I am writing these words about a Shinya Tsukamoto film but when it does get dark and violent it comes at such a start and stop gap pace it doesn’t have the impact it could of. And there isn’t much , none at all , of a climactic ending and ends more like some sappy romance drama.

I still think Shinya Tsukamoto is a phenomenal director/artist and any asian horror movie fan , hell any fan of horror films and films in general owes it to themselves to check out every film he has made and then watch NIGHTMARE DETECTIVE. And you should do it , make it a project , do it over the weekend , have fun with it and email me to tell me what you think. Thanks for reading this long ass review , thanks HorrorNews.net , thanks Mike , and I will even thank Scarlett O’Terror! 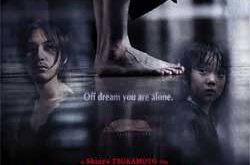