Thirty five years ago, a documentary was made

about the state of violence in the U.S.A.

America never had a chance to see it…until now. 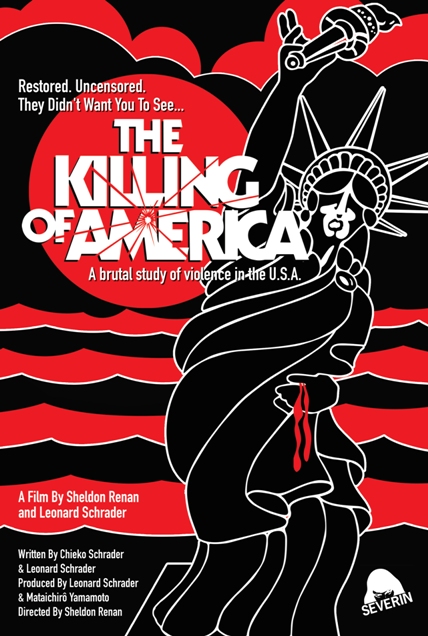 SEVERIN FILMS PRESENTS ONE OF

THE MOST INFAMOUS DOCUMENTARIES

EVER MADE FOR THE FIRST TIME TO

THE KILLING OF AMERICA

Los Angeles, CA – In 1981, director Sheldon Renan and Academy Award® nominated co-producer/co-writer Leonard Schrader (brother of filmmaker Paul) created a graphic and provocative examination of America’s history with – and penchant for – senseless violence, mass shootings and cold-blooded murder. Piercing, brutal and at times, unflinchingly graphic, The Killing of America was exhibited briefly in New York in 1982…and subsequently shelved. While the ensuing thirty five years have – thankfully – seen the lowering of overall violent crimes in the nation, the documentary’s themes about equating violence with economic & racial discrimination and the continued proliferation of personal firearms in our republic still echo in the national discourse during this election year. Sometimes, to solve a problem in front of us, we must look to the past…

Severin Films announces the October 25th Digital HD and November 8th Blu-ray & DVD release of Sheldon Renan’s controversial documentary The Killing of America on Blu-ray™, DVD and On Demand. Fully restored and just as explosive almost four decades after its inception, the film will be presented uncensored and uncut. In addition, the Blu-ray™ release includes the even more unnerving Japanese version known as Violence USA, which contains previously unseen footage from the American cut. A limited nationwide theatrical release is also planned; cities and theatres to be announced.

The Killing of America begins with the following cautionary note: “All of the film you are about to see is real. Nothing has been staged.” Guided by interviews with criminals (including Robert Kennedy’s assassin Sirhan Sirhan) and law-enforcement officials as well as incendiary newsreel footage of actual violent crimes, viewers are taken on a profoundly disturbing and still chillingly relevant journey into a uniquely American heart of darkness. Rock! Shock! Pop! proclaimed the film “a powerful experience,” The Guardian declared it “austere and remarkable,” and Vox Magazine showered praise via the warning “not for the faint of heart.”

The Killing of America Blu-ray™ and DVD comes fully loaded with exclusive Bonus Features including:

Tags THE KILLING OF AMERICA