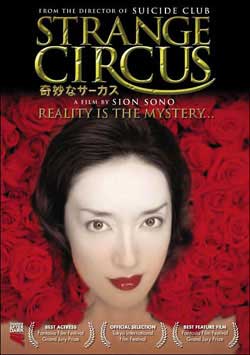 School principal Ozawa Gozo rapes his daughter, Mitsuko, after she sees her parents having sex. Her mother Sayuri witness the event. Gozo now rapes both of them as he pleases, while his family is undermined by incest, suicide, and murder… such is the erotic novel wheel-bound novelist Taeko sets on to write. She is assisted by Yuji, a young man who is actually on a mission to uncover the reality of this story, of Taeko’s past, and of the locked room in her apartment. But the reality and truth beneath the Grang-Guignol nightmares Taeko creates might be too much to bear…

With its hallucinogenic carnival intro, Strange Circus quickly bursts forth into a rather grim reality. Our focus, a young child name Mitsuko appears to be the daughter of a wealthy parents who enjoy having sex pretty often. The father Gozu who also works as the school principal goes about 2 lives. The day job where he delivers his role with confidence and high regards, and then the his active nights that appear to be pretty driven to having vigorous sex acts with his wife regardless of the fact that the daughter see’s it or not.

We see these scenes so much in this film that it’s apparent that the child is ignored on a regular basis which influences her constant fantasizing about being in other places. This idea though rings even truer as the film moves forward.

It doesn’t stop there. The pervert father inflicts mental and physical abuse by subjecting their daughter to watching the sex acts per way of being locked in a Cello case with an carved out eye hole. Mitsuko begins to see herself more as her mother than who she really is. Meanwhile, Gozu maintains the facade of preaching to his students about how they should honor there parents and children in support of family life.

Not too long after that, the father takes it a step further by way of daily doses of on-going incest regardless of the mother Sayuri’s consent and much to her silenced disapproval. A role playing exchange is inevitable as the mother is subjected as well to being locked in the Cello to watch her daughter being molested. To further damage your experience, the jealous mother becomes makes it a point to daily abuse her daughter physically while the husband is away. This action embeds even further into how the film plays out and a guilt stricken conscience that takes a life of its own. It’s all around wrong and sad and bit painful to watch as this transpires. Though this isn’t the first time Asian Horror has used incest in this way to present a sense of mental horror to its audience.

Mitsuko begins to fantasize even more, picturing herself in the circus audience laughing and enjoying life with her mother as well as daily visits to a make believe room with walls painted in blood. Now to be honest, some of these Asian films tend to lose me a bit in these odd visual offshoots. To the point that even David LKynch might scratch his head, but you go in for the journey and hope that all works itself to resolution and understanding. In its grotesquely lavish way we move forward and back in time as Mikisuko delves further into fantasy world until we find ourselves in the present with wheelchair bound writer Taeko.

Taeko appears to be Mitsuko who has gained success through the telling of her life and presented it as a work of fiction. At this point in the film alot gets unclear on what’s reality and what’s a dream. Taeko takes on a new assitant named Yugi and the lines blur pretty heavily after that. I can’t really say that I fully got the gist of the last half hour. A bit of role reversal, new discoveries, insanity, just rewards and split personalities make this portion a bit hard to swallow.

Still with all its disturbingness the film is filled with moments of beauty and a classical score that tends to lessen the edge of what you are watching. I dont think this would satisfy horror fans, but it does present a horrific view in more psyhcological way that still makes it unsettling.

Films of this nature are clearlty meant for more in-depth delving discussions about symbolism, psychology and the human psyche, however as a passerby alot goes overhead while leaving us with some damaging images of what transpired on screen.