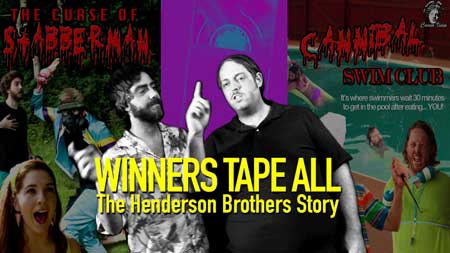 After nearly 10 years, the creators of the zombie-comedy Die and Let Live will be releasing a new feature length film, Winners Tape All: The Henderson Brothers Story.

Director Justin Channell’s latest film, Winners Tape All: The Henderson Brothers Story is now available through the video-on-demand service VHX and DVD. The release is being handled through Channell’s own Brainwrap Media label, which previously reissued films from his IWC Films production team.

Winners Tape All is a mockumentary-style comedy that pays homage to the low-budget regional filmmakers of the VHS rental era and was inspired by the recent resurgence in popularity of VHS tapes among horror collectors.

The film tells the story of the films “The Curse of Stabberman” and “Cannibal Swim Club.” These straight-to-VHS ‘80s horror films were created by two stepbrothers, Michael Henderson and Richard Henderson (played by Channell’s frequent collaborators Zane Crosby and Joshua Lively), and later gained a cult following.

A VHS collector and horror fan named Henry Jacoby (Chris LaMartina, director of “WNUF Halloween Special” and “Call Girl of Cthulhu”) rediscovers the films and seeks out the creators, leading to the first on-camera interviews with the Henderson brothers. However, as they look back on their work, they discover they may not be as great as they remembered.

Blending elements of This Is Spinal Tap, Garth Marenghi’s Darkplace and little-known 1980s horror flicks like Cannibal Campout and Video Violence, Channell has created a mockumentary that will appeal to hardcore gorehounds who remember renting horror movies on VHS, as well as more mainstream fans of Christopher Guest comedies.

The film can be downloaded or rented in 1080p digital high-definition format at winnerstapeall.vhx.tv. A streaming rental costs $2, while the download version is $5. A deluxe package with bonus features is on sale for $10, which includes 18 minutes of outtakes, HD versions of the Henderson Brothers’ films (which are presented in VHS-quality in the film for authenticity’s sake) and a feature-length audio commentary with Michael Henderson.

All of the bonus features are also be available on the DVD release, which is available at www.iwcfilms.com. The film is also available in a handmade VHS and Blu-Ray combo pack. Winners Tape All is also expected to be available through Amazon video-on-demand and DVD sometime later in 2016.