Thankskilling the Musical Taking the stage in Columbus, OH October 21-30 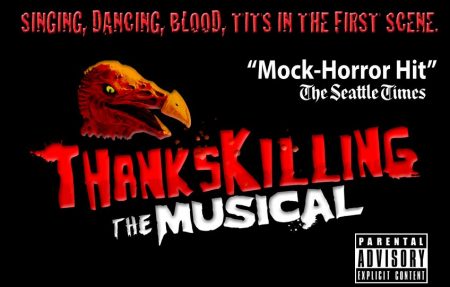 Leading up to their beloved Halloween season, Thankskilling the Musical will be taking the stage in Columbus, OH October 21-30 at the Garden Theater.

Based on the cult B-horror film ‘Thankskilling’) which garnered attention of horror fans worldwide, ‘Thankskilling the Musical’ re-creates the atmosphere of the original film and brings so much more to the table! The film was made in Newark, OH, so we’re bringing the show back to its roots after SOLD OUT successful runs in Seattle (Balagan Theater), New York City (Festival of the Offensive), and Atlanta (Dad’s Garage).

Five college kids leave school for Thanksgiving break. Little do they know that there’s an evil turkey on the loose, who will do everything and anything in his power to end their lives!

The run of the show is exceptionally special, as it stars Ryan Francis, who played the original Darren (the Nerd) character in ‘Thankskilling’.

Thankskilling the Musical was conceived by David Eck, Jeff Thomson, and Jordan Mann. The Columbus Show will be directed by Patrick McGregor with musical direction by Jonathan Stewart. The show stars Katie Reed as Kristen the Virgin, Mina Foreman as Ali the Slut, Caleb Baker as Billy the Hick, Jesse Treiger as Johnny the Jock, JT “Chops” Walker as Random Guy, and Cody Schmid as Turkie.

Filled with nonpolitically correct humor, offensive content, clever one-liners, and extremely catchy music, fans of the Thankskilling franchise and fans of musical theater will find this to be a one of kind show!

Tickets can be purchased online at www.thankskilling.ticketleap.com or group discounts for 10 or more at (614) 769-3421.