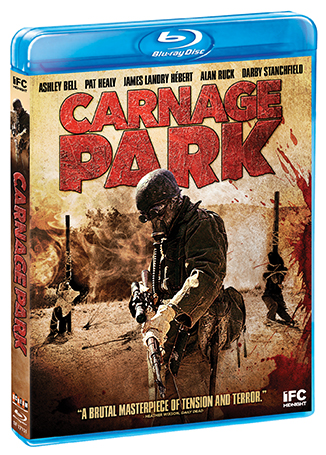 An official Selection of the 2016 Sundance Film Festival and SXSW 2016 Film Festival, Carnage Park is a pure-pulp thrill ride that jumps between past and present as it pieces together the puzzle of a shocking crime. Featuring an unsettling score and suspenseful cinematography, this intense thriller makes its home entertainment debut November 1, 2016 from Scream Factory, in conjunction with IFC Midnight. Fans can pre-order their copies now by visiting ShoutFactory.com

It’s 1978 and a bank robbery gone wrong forces two criminals to take a hostage – the young-but-resilient Vivian (The Last Exorcism’s Ashley Bell) – as they go on the run. But things go from bad to off-the-rails berserk when Vivian and her captors wind up in the crosshairs of a deranged ex-military sniper (Pat Healy, Cheap Thrills, Starry Eyes), who ensnares them in his deadly game of cat and mouse. Rising horror auteur Mickey Keating (Pod, Darling) directs this gritty, grisly homage to the glory days of grindhouse cinema.