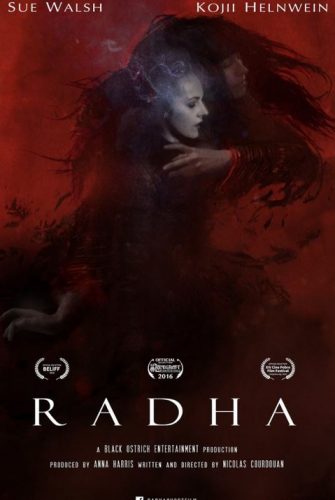 A young woman on the run from her past tries to find solace and oblivion in the arms of a mysterious dancer.

Another short film! Today we have RADHA, a short film from Ireland written and directed by Nicolas Courdouan.

Our hero is a young woman named Saoirse (Sue Walsh) who is running from a past trauma. She has changed her name and tried to forget it all, but at a party she is recognized by an old friend.

She flees the party and finds herself at a performance space where a dancer named Radha (Kojii Helnwein) is putting on a performance. Blown away by the spectactle she has witnessed, our hero becomes better acquainted with this dancer. Through this new relationship, our hero learns how to move forward from her trauma and embrace life.

The film is a bit abstract but tells an incredible story of how resilient humans can be if they put their minds to it. An interesting note – Radha is an Irish name that comes from the word ‘radharc’ (vision, sight, aspect). This name is no accident.

I don’t want to spoil the film in any way. So not sure what else I can say. It is an emotional journey with strong performances by the cast.

Using my special short scale of one to five, five being awesome, I’m giving this film 4 vials.