Home | Horror Poetry that will Shock the Senses!

Horror Poetry that will Shock the Senses! 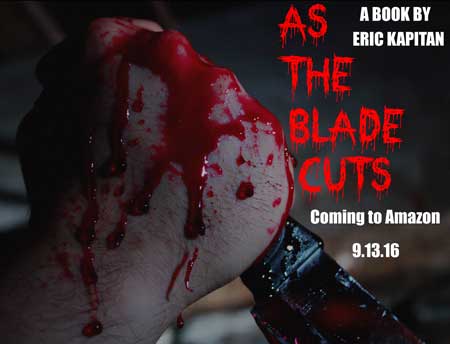 September 13, 2016 marks the release date of horror author Eric Kapitan’s latest book, As The Blade Cuts. A collection of 40 poems dealing with blood, gore, death and extreme horror. As The Blade Cuts is available on Amazon in paperback and Kindle formats. The paperback version retails at $9.99 while the kindle version sells at $2.99.

The world of poetry is about to become more horrific. As The Blade Cuts, a collection of forty poems of horror is available for purchase on September 13, 2016. Written by horror author Eric Kapitan, the book is available in both paperback and digital format on Amazon.

Coming out just in time for Halloween, the poetry found in the includes extreme horror elements. Kapitan describes his poetry as Exploitation Poetry because it deals with subjects that are considered taboo and at times offensive. As The Blade Cuts is Kapitan’s second book.

“Author Eric Kapitan’s dark poetry is beautiful as it is terrifying. As the Blade Cuts is a perfect read for lovers of horror, gore, and all things Gothic. The words written in this book are not for the faint of heart, which is just one of the reasons I enjoyed it so much. “ Said Melissa Ann-Owner and writer of Horrorgeeklife.com

As The Blade Cuts is available to purchase in both paperback and digital format on Amazon. The paperback copy retails at $9.99 while the digital copy sells at $2.99. Eric Kapitan will be appearing on the internet radio show Vicki Drane speaks on September 14th at 7 pm eastern time. The show can be heard on ArtistFirst Radio Network

A huge horror fan, Eric Kapitan has always loved to tell stories in various formats. His first book Darkness: Poems of Extreme Horror was released October 2015. His favorite authors are Jack Ketchum and Edward Lee. Kapitan is also a big fan of the Phantasm film series. Keep up to date with Eric Kapitan and As The Blade Cuts on his official Facebook page