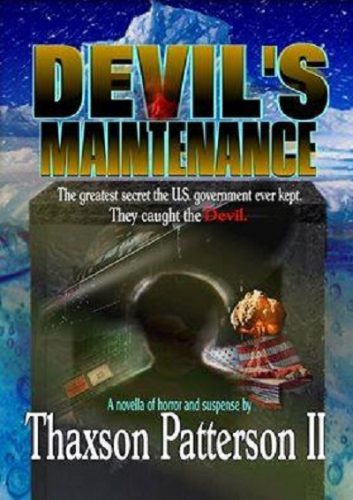 Locked away incarcerated below 1000 feet of ice held in a remote dark-black-box container, The government holds the biggest secret ever kept from man….the devil. It was this film-like introduction of the man, his accomplishments, and his life of inflicting chaos and death upon his associates that pulled me into this cleverly narrated novel.

Author Thaxson Patterson II, is a writer who indeed has his creative pulse attuned to the idea of a entity that otherwise would be regarded as fiction and fantasy. As Greg and Ray make their way to a remote distant facility, we are revealed an elaborate introduction into the government’s most treasured captive held locked away for most of his entire life. This is the book titled: Devils Maintenance.

This idea of the devil and how he made his way thru the world goes beyond simple fascination. It is an idea that even today is believed to be some part of most Christians reality or at least when this abomination of heaven decides to reveal himself. Based on this core idea, Patterson asks that pending question…what if?

Patterson gives page upon page of details leading up to the inevitable meet that lies ahead as 2 agents of government make their way across ice-filled seas in anticipation of meeting the man himself.

Cleverly going by the initialed name of Daniel Edgar Vincent Ivan Liberty (aka DEVIL), the 2 men exchange information and stories they make way to a man of genius beyond anyone before him. A man rooted in evil with a brain that acts like a super computer providing intellect as trade. Requested under the order of the NSA, the 2 prepare to visit the only living organism that can calculate outcomes and predictions with raw data. Yes the devil has been kept alive and well as “the ultimate resource for mankind.

Ray has no idea what awaits him as the Devil’s master plan unfolds. What horror await in the world yet to materialize and why has the Devil accepted this meeting with Greg and Ray in the first place?

Patterson delivers an intriguing amount of information aligned with a complex well told storyline that might very well be the next makings of a future movie script. “Devils Maintenance” works on a psychological basis that presents with a firm sense of elegance and depravity all rolled into one.

While the subject matter itself sounds intriguing enough, it is the sequence of events that follow that makes for a gripping horror tale. Thaxson Patterson II has anticipated a powerful back story lead-in right down to the well planned holding cell submerged far beyond the reach of the world.

Playing out with tension and anticipation, “Devils Maintenance” is a sure-fire read guaranteed to pull you in right up to the finale. Smartly executed and impressively written, I can say with comfort that I’m a fan of this piece!