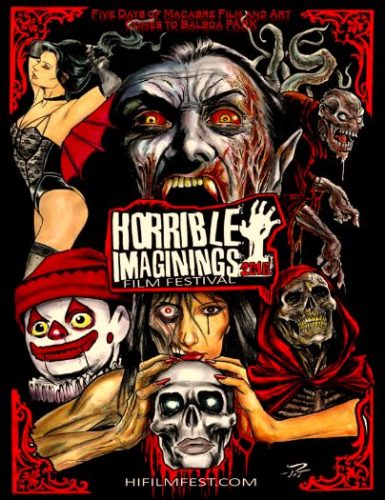 The Horrible Imaginings Film Festival has announced the program for their 7th year of brining horror and suspense cinema to San Diego—and this year they are extending the event to five days! Starting on Wednesday, September 7th, continuing through Sunday, September 11th, they will “Usher In the Season of Fear” at Balboa Park’s Museum of Photographic Arts. There will be over 70 international feature and short horror films, as well as readings, panels, discussions, performance art, and more.

Film blocks will highlight the diversity of the horror genre, with themes focusing on animation, comedy, science fiction and creature feature, supernatural, and more. Feature films such as the highly-anticipated Elijah Wood-produced The Greasy Strangler, Sion Sono’s Japanese comic mayhem film Tag, LA Film Festival winner Beyond the Gates and more should provide a unique and unforgettable experience to audiences.

“Every year, we seek ways to enhance the experience and meet our mission to expand and elevate how we watch, discuss, and reflect on art within the horror genre,” said festival founder Miguel Rodriguez. “This will be our 7th year, and it’s bigger and better than ever. I think we are closer than ever to meeting that mission statement, including literature, performance art, virtual reality, filmmaker networking and so much more!”

This is San Diego’s premiere celebration of horror—a genre that has been an important part of storytelling since humans started telling them. Monsters, shadows, and things that go bump in the night are the guests of honor on the gorgeous cinema screen—prepare for Halloween early!

A look at the complete schedule, times, films, descriptions, trailers and more can be seen atwww.hifilmfest.com/2016-schedule/. Tickets and full festival passes are also available for purchase online.