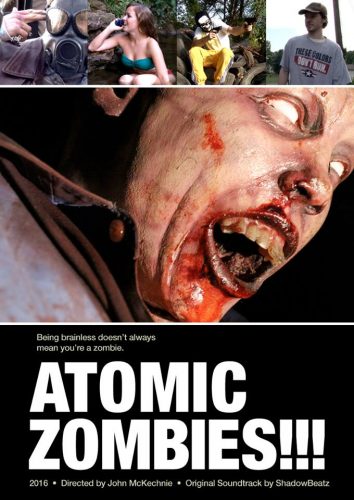 ATOMIC ZOMBIES!!! is a new independent horror/comedy film, written/directed/edited by John McKechnie. The movie starts off with a goofy 1930s-esque commercial about a secret nazi research facility in America, disguised as a nuclear power plant. Fast forward to today, one of the towers explodes and releases some kind of green gas into the air, turning the nearby people into zombies.

While most zombie apocalypse movies find a group of efficient, military trained soldiers, doctors, scientists and survivalists, this one centers on a more ‘ordinary’ group. No one is particularly useful or even smart, and it’s a wonder they’ve made it through the first few weeks already. They run into other survivors throughout the movie (some helpful, some not so much…) and deal with issues like medication addiction and staying tan.

ATOMIC ZOMBIES!!! is about as low budget as they come, but the cast and crew worked with what they had, and continuity errors and cheesy acting just add to the charm.
www.youtube.com/watch?v=H_gBjoAK5mA
There are some good gore effects by Monster Masks, and a great original soundtrack by Shadowbeatz who also stars as one of the group.
ATOMIC ZOMBIES!!! is available to buy or rent digitally on Amazon, and will be coming out on DVD on October 11, 2016. More info on Facebook.com/atomiczombies
Share