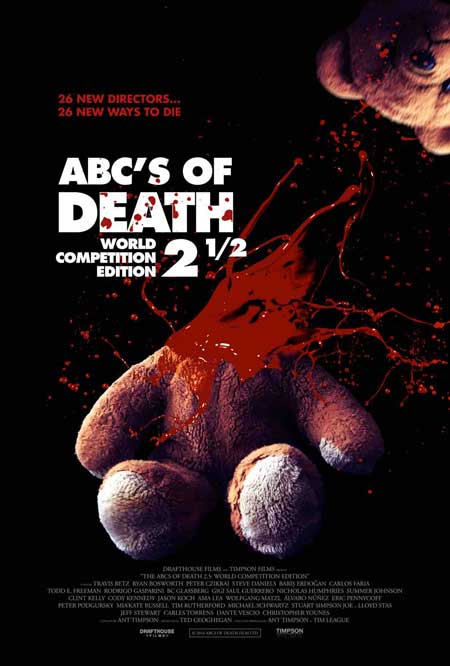 Drafthouse Films has announced the upcoming release of ABC’s of Death 2 1⁄2: World Competition Edition, the result of an extensive global campaign intended to spotlight the most passionate and talented upcoming filmmakers in the horror genre. The latest entry in the beloved franchise will arrive exclusively on Vimeo August 2nd as a $5.99 download or $2.99 rental.

The series, known for its anarchically alphabet­-themed anthology of short films, launched a “Filmmaker Frenzy” competition for the segment devoted to the letter M – collecting more than five hundred, three minute-­long entries from over forty countries in the process – including Robert Boocheck’s winning entry “M is for Masticate” featured in ABC’s of Death 2.

ABC’s of Death 2 1⁄2 showcases an additional top 26 finalists, providing fans 85 minutes of unadulterated madness, including “M is for Marauder,” “M is for Malnutrition”, and “M is for Mariachi,” along with plenty more new nightmare fuel to tide them over until the next numbered segment in the series.

“The production team had a real blast selecting the 26 shorts that make up ABC’s of Death 2 1/2,” said producer and series creator Timpson. “The hard part was only selecting 26, as the competition provided so many outstanding entries. We couldn’t be happier with the final lineup. There’s enough horror, humor, weirdness, and frankly ­ truly f**ked up material to give even the most jaded fan a wake-up call from Hell.”

The film is currently available for pre­-order