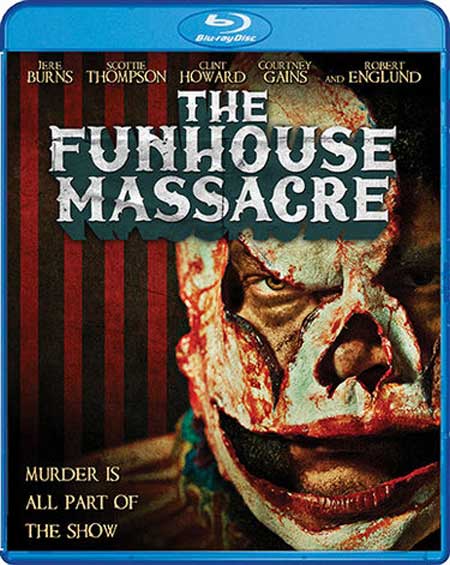 A group of friends visit a haunted funhouse attraction on Halloween only to discover that a gang of escaped homicidal maniacs is actually lurking inside.

I’ve heard a lot of great things about The Funhouse Massacre and was pretty excited to see it as I thought that it sounded like it could be quite awesome. A lot of people who have seen it told me that it would be right up my alley and that it had a nice 80’s slasher flick feel to it. I went into it with pretty high hopes but unfortunately I ended up walking away feeling pretty disappointed in general. I just wasn’t really into it and while I didn’t hate it I wasn’t exactly blown away by it either. I thought that it was a little underwhelming and while it did have its moments overall I just thought that it could have been a lot better.

One of the biggest problems that I had with it was the fact that there were just too many characters. There are a ton of them and while the biggest majority of them are obviously just fodder for the killers it was sort of hard to keep up with who everyone was supposed to be for the most part. While I did like the fact that there was a number of killers in the movie there was only like one or two of them that really did anything and stood out among the others. I know a lot of people will probably really like Dollface but I just didn’t care for her and thought that she was just a poor man’s Harley Quinn. I thought that she was just more annoying than anything and she just didn’t really do anything for me.

The same could be said for the main baddie Mental Manny who tries his damndest to be intimidating and creepy but instead reminded me of a watered-down version of The Joker (I’m assuming the people behind the movie were big Batman fans). Poor old Clint Howard’s character The Taxidermist is just sort of there and doesn’t really do anything that amazing and the same could be said for Animal and Dr. Suave, two of the other psychos that are hanging out in the funhouse. I think the only one of the villains that I really liked was Rocco as he was actually pretty badass and I dug the fact that he was a former wrestler that killed several of his opponents in the ring in the past (plus he is responsible for all the cool death scenes that take place in the movie). I know that on paper it looks cool to have such a large group of killers all in one film but it just becomes a little too much and most of them don’t really do anything other than hang around and act crazy without being that interesting in general.

The same could be said for the main characters as well. Aside from the main group of friends we also have a sheriff and her deputy thrown into the mix as well. To be honest I am struggling to remember the names of most of the characters from the main group of friends and since I just watched the movie last night that isn’t a good thing. As I said before there are just way too many of them and there is really nothing special about any of them as they are pretty much just your stereotypical horror film characters such as the bitch, the good girl, the good girl’s crush, etc. I had a lot of trouble really caring about any of them so I wasn’t too upset once they started getting killed off as a lot of them were pretty interchangeable. I’m not even sure who the main character was supposed to be as the focus sort of switches between characters several times during the course of the film and as such we don’t really get to know any of them to any sort of great extent. I think that the filmmakers could have trimmed about half the cast of characters and focused a little more on the ones that remained because as it is none of them were really that believable or even developed that well.

Even though it had an interesting premise I just couldn’t get into it for some reason that I just can’t quite put my finger on. You would think that I would have loved it because it is pretty similar to a lot of 80’s slasher flicks that I dig but I just wasn’t feeling it. It almost seemed like there was just too much going on and the whole subplot with the sheriff’s relationship with Mental Manny just didn’t work and felt forced. It was almost as if it was just thrown in at the last minute and as a result it just wasn’t that interesting to me. I also wasn’t too big on the fact that it just didn’t know what kind of movie it wanted to be. One minute it was serious and the next it was a comedy and I thought that it tried a little too hard to be funny and most of the humor fell flat (probably because it was sort of shoved down our throats).

There was a time or two that I may have chuckled a bit but overall I just don’t think that the comedic elements worked and I think that it would have been a stronger movie in general if the filmmakers had played it a little more straight (and don’t even get me started on the painfully bad Abbott and Costello-like routine involving the Dr. Who costume that took place in one scene toward the beginning that was just beyond horrible and more than a little pointless).

Other than a few of the fun death scenes (the one involving the mallet and some poor bastard’s head was pretty awesome) there wasn’t really a whole lot that I liked about The Funhouse Massacre. I really wanted to dig it but it just wasn’t for me. It had a lot of problems and even though Robert Englund was in it (for about 5 minutes) I just really wasn’t a fan.

Like I said earlier it wasn’t horrible and I can’t say that I hated it but I have a lot of trouble recommending it at the same time. It reminded me a lot of the 1991 classic Hauntedween (which was partially shot on the campus where I went to college back in the day) as It has a lot of the same elements but it was nowhere near as good (Hell, there is actually a Halloween episode of American Dad! that has a similar premise and I thought that it was even better than this film). Check it out if it sounds like something that you might me into but keep your expectations mighty low.

The Funhouse Massacre is now available on bluray per Shout Factory